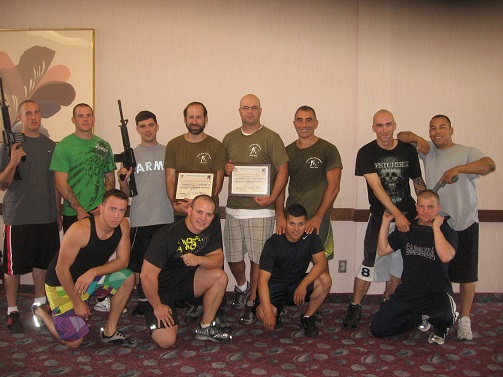 I began training in martial arts a long time ago. I made the transition to Krav Maga a few years later. We did not bother with any official name at the time, nor were we aware of any official lineage or legendary historic founder. At the time the style was not well known outside of Israel, nor was it very popular in Israel itself. Some basic form was taught in the military but, contrary to popular opinion, very few soldiers ever achieved any proficiency in it. It was only Hollywood, and some clever marketing tactics, that brought Krav Maga to world attention. Sadly, again contrary to popular opinion, it was not the "brutal effectiveness" of Krav Maga that made the style popular. No, it was the clever marketing tactic of using Israel's image as a defeater of Arabs on the battlefield as a way to bolster the image. The image of the tough Israeli also contributed to this marketing concept. History is shaped by people with an agenda. The sad thing is people do not know when they are being dupped. People want to be fooled.

No wars were won with Krav Maga. The bad ass image was fostered by full page advertisements in American martial arts magazines, the idea of it being "the official hand to hand combat system of the Israeli Defense Forces". Like I said earlier, most instructors took no more than a 3-week course, most soldiers, far less.

To further complicate matters, in Israel the term Krav Maga can legally be applied to any martial art. Thus, a judo or jujitsu instructor can advertise himself as a Krav Maga instructor. Add to the fact that he most likely served in the military and perhaps afterwards took a part-time job in security (which is the norm for many university students, a good way to make some easy money while studying, very flexible hours), and you have the making of an Israeli Rambo. Get a tattoo and you are ready to conquer the world. All you need now is a Facebook page, a new catchy title using the words Krav Maga, and a logo.

This makes me sad.

Before I continue, I will say a few words about myself, not to brag but to clarify. My friend, teacher and mentor Prof. Arthur Cohen came to one of my seminars in the early years and made some notations. He corrected me on several points later on. For one thing, he said, I never introduced myself. The crowd did not know me, and I never explained my background or credentials. This, he said, was a mistake. I countered by saying why praise myself. Why waste their time talking about me and my accomplishments?

Arthur explained that people have a right to know who the teacher is. They should know why this person is qualified to teach just as a brief biography of an author is always included in every book and even in every article. The reader/student has a right to ask; who is this person and why should I spend my time listening to him or reading his words?

So, I have been training in martial arts for about 40 years. I have trained with some of the best martial artists of my generation. I have earned ranks with Itay Gil, both in Kickboxing and Krav Maga. I have been recognized and honored all over the world, by police, military and prison systems as well as respected international martial arts organizations. For a full profile click on my name above. I hope that will suffice for now. I have earned the right to speak, it is up to you to listen or not.

Daily I am confronted with videos on social media, all part of the job. I am frustrated and irritated to see the same old techniques, never changing, never being reevaluated. People all teaching the same old Krav Maga that I rejected over a period of 15 years, going back some time. During my formative years I saw the flaws in these approaches, which I point out at my seminars and allow counter viewpoints to be heard. Every technique I teach, I say, now you try it. Try it, test it, question it. I am here to defend what I teach. I believe in what I teach. I have myself challenged, and continue to challenge, every single technique that I teach. Our lives are on the line.

I see the same front kick to the groin, a "Golden Calf" technique that is never questioned. How likely are you to be able to hit that target on a street thug? We naturally close our legs and do not allow an opening. It is an easy kick to block, it is a difficult kick to pull off effectively. Teachers teach students to hit the bag as if it is so easy to reach the groin target area. And yet it is not questioned.

The same applies to the Knee Kick, as if it is the solution to all the worlds' problems. It is rare to be able to use it as you wish.

Another Golden Calfer is the standard defense vs a choke from behind; you reach backwards and using your fist strike the guy in the leg, really? you think you can pull that off? you think you will hit the target before he chokes you out? you think he will not see it and move his leg? you think that little fist is going to cause him to buckle over in pain? Are you that delusional or have you just never given the matter any thought? The Golden Calf syndrome, follow the unthinking masses.

The eye gauge is a similar technique. While it might have a chance under extremally rare circumstances, for the most part one will never have such an opportunity. The eyes are naturally protected and all one has to do is move slightly and thus avoid any serious damage. Again, a technique always copied, rarely analyzed properly.

We treat thugs and street criminals with total disrespect as if they are good boys from out dojo class and not the brutal street animals that they are. Terms like "Hey man, don't hurt me", will not help. They will hurt you at once. you will have no time for this acting routine.

There is so much I see wrong in the classic approach. I see a need for a change, on many levels.

My mother always said, if you don't like the way others are doing something, try to do it better yourself. So rather than just complain I take the active approach. I have shared our new techniques and approaches all over the world. I have shown them to some of the leading martial arts experts of our time and found approval. My efforts were rewarded with all sorts of honors, ranks etc, although the greatest rewards have been the countless stories of people who used these techniques to save their lives.

I learned the old ways, many styles, and built on that foundation. I am eternally grateful for that foundation and some of those instructors eventually came to learn from me. The key point and bottom line is to care about people enough to dare to be different. Yes, I know that new concepts and techniques will be subject to mindless ridicule and mocking, but I am OK with that. If it can save a life, it is worth it. 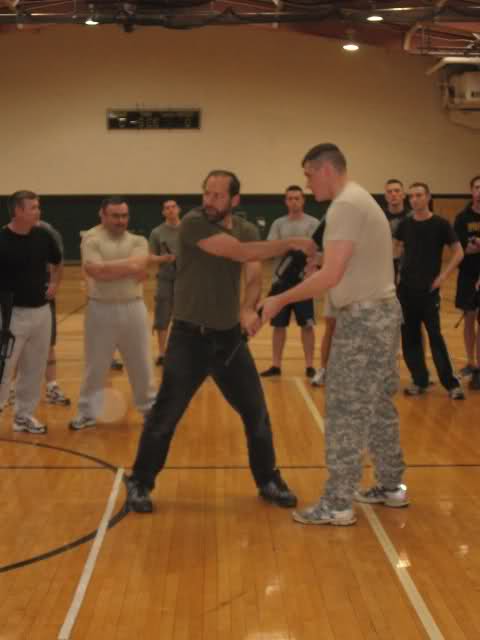 We train, we repeat, we need to be ready. Moshe training US Special Forces, somewhere in the USA.