I am writing this blog on a day when Jerusalem is "snowed in". I do not live in Jerusalem but I live close enough that I can see it from my window. All I can see is a thin layer of snow on top of some mountains.

I have seen the many photos posted on the news, including videos, and to be honest, I have not seen any photos where the snow is higher than anyone's shoes.

Now I do not mean to belittle the severity of the storm, but having been to Michigan, Norway, and Germany in winter, well…I have a different perspective.

I recall arriving in Norway and seeing the weather as 9 below zero, and my friend commented, "Good thing you came while we are having pleasant weather, before the cold spell comes in."  (Good thing Morten bought me a magic mug with which I can get free coffee at every Stat Oil gas station, like the best present ever!)

Or, in Grand Rapids, Michigan where each morning we had to shovel a path to the car, clearing the snow.  And then begin the long process of scraping the snow and ice off the windows, warming up the car etc.  You had to allocate extra time each morning for this procedure. Yet no one complained, no businesses were closed, and everyone arrived at the seminar smiling with their coffee in hand.  (Except for Craig who prefers tea, we love him anyway.)

Or, in Germany, where my first words in German were, viel Schnee, sehr kalt, much snow, very cold. 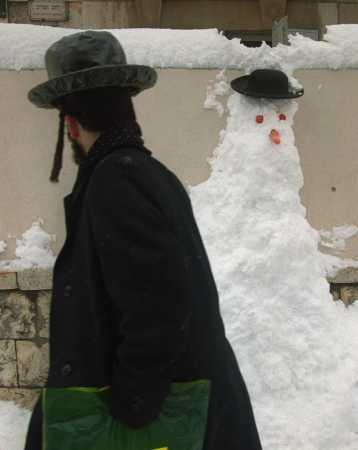 Jerusalem in the snow

Now in all those places business and life went on as usual, despite the snow and cold, but here in Jerusalem life has come to a standstill. Schools are closed, most work places are closed, there is no public transportation and  both entrances to Jerusalem are closed to all traffic.

If Michigan, Germany and Norway reacted this way they would only work a few weeks each year!  (OK, I exaggerate)

On the other hand Israel is a leader in many areas, such as Search and Rescue, Counter Terrorism and Krav Maga self defense.

The point I am trying to make is rather simple; for each nation and for each individual we must recognize the strengths and weaknesses.

Israel, A Nation of Warriors,
the book

What are Israels' strengths?
Security, safety, hand to hand combat.

Learn from the inside what it is all about.
Read the book and come to Israel for Tour and Train.