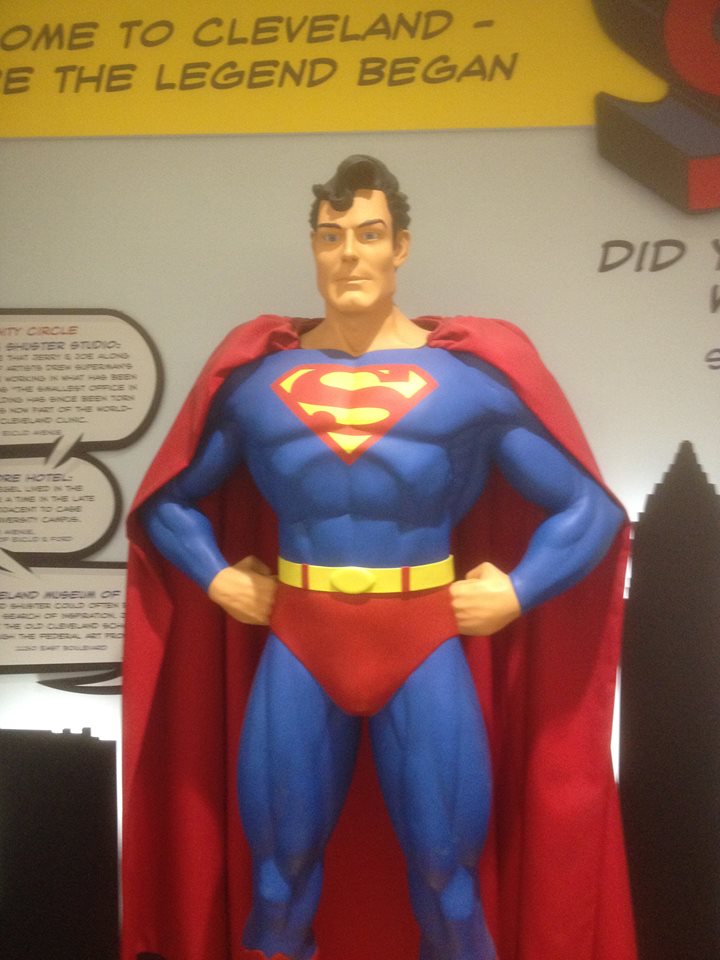 Funny, he doesn't look Jewish; Superman at the Cleveland airport

Superman; you do not need to be a Jerry Seinfeld level fan to appreciate the significance of the Superman character. On TV, movies, cartoons and comic books there has never been a American superhero the likes of superman. All the others are imitations riding on the success of the original super hero.

But what I did not know until my return to Cleveland is that Superman is Jewish. And yes, it figures.

Superman was the creation of two Jewish high school kids, Jerome "Jerry" Siegel and Joe Shuster, Jewish kids whose parents came to the USA as poor refugees from the Russian Empire and Ukraine.

The boys wanted to create a super hero; a man who was of perfect build and super human strength, super intelligence and perfect moral character. This was to be a man who acted out of purity and concern for all human beings. Might we say this is two Jewish kids dreaming of the messiah and bringing him to life in the form of a cartoon? Might we say this is an expression of the age old Jewish hope of the Messianic era, of peace and brotherhood, of Truth, Justice and the Jewish way?  (transferred to America).

Is it possible that boys who grew up with the Torah's admonition to help the poor and needy, the widow and the orphan, decided to create a super man who would do just that?

Is it just a coincidence that the year Superman was "born" was also the year the Germans elected Hitler as their leader?  As my friend Sonny said, "The world needed a super hero to counter a real life super villain, Hitler".

Did these two Jewish kids see what all the world leaders missed?

Truly they knew the world needed a super man to save them, and if no such man existed in reality, well, they would create one on paper. Powerless to change history they at least created a fantasy world in which one man would set things straight. Isn't that the way kids think?

As I landed in Cleveland, a place I first encountered more than fifty years ago, I was greeted by Superman, a fellow Jew and a fellow Clevelander. I appreciate the welcome and I say to the boys, Joe and Jerry, I too am working in my own small way to bring Truth and Justice to mankind. I and all our of IKI instructors are working hard to be our own little supermen and women and to create students who will carry on this path of righting the wrong, of helping the needy and fighting the fight for truth and justice.