Undoubtedly many readers instantly have the infamous ‘WTF” thing flash across their minds when they see the title….

The title comes from comments made by many masters and school owners. Essentially it is much easier to sell T shirts than to sell training. People pay one small price for a martial arts T shirt and go about their business. Many of these actually believe that wearing something like an MMA or HapKiDo or Krav Maga T shirt will scare away aggressors and keep them safe. With that thought process, why bother with training in the art they advertise?

Of course the “flip side” of that is the fact that some people may well take this as a challenge and may aggress someone they would otherwise leave alone. Maybe it starts with some verbal comments and goes from there…Maybe it starts physical and gets worse…In any case the T Shirt wearer will likely be totally unprepared to deal with what happens.

Then again wearing our T Shirts is good advertising so if you want to strut around doing so, be my guest….Just be aware that what you think may well be the opposite of what happens.

With that said, this post is mainly a philosophical overview of what I personally consider reality based on my personal experience and exposure. It is in no way meant to be posed as a “truth” or any kind of “absolute”. The reason I decided to post this is simply that I have become weary (after 26 or 27 years of martial arts and self defense training) of dealing with, talking to and observing “rank junkies” and “certificate junkies”.

Some of us (unfortunately, in the US, not a high percentage) actually train in order to learn and become proficient or in some cases more proficient in what we do. We may well be the proverbial 1% and if so that is very sad.

There are people across the globe who thrive on having more certificates to show off than anyone else. I see websites touting a person’s credentials and a huge list of all sorts of related and often good sounding but in reality unrelated topics. Apparently in someone’s world a pre printed piece of paper with your name on it makes you better than you would be without it. Many people go to free and in some cases paid for seminars that have topics taught or lectured by allegedly famous individuals in their field. A large percentage of these people attend these not to gain actual knowledge but rather to have the certificate that infers that they gained that knowledge. For example, there have been many ‘free’ or ‘low cost’ “active shooter” seminars. I accept the fact that I may well be denser than the average person but I fail to see how sitting through a 4, 6 or 8 hour lecture by an alleged expert will help you or anyone else if you actually encounter or are involved in an active shooter situation.

As an example, consider reading books on how to drive a car and attending a lecture or two and watching videos about this. If you get your license (certificate) at the end of the course or lecture, will you be able to safely drive a car in rush hour traffic on a 5 or 6 lane expressway (or anywhere else aside from an empty parking lot)? Likely not so I rest my case on that topic.

For what it’s worth I have a ton of certificates related to both my profession and to martial arts, seminars, awards and the like. They sit in boxes on the high shelf in my garage. The were given to me, I appreciated them and that’s it. I have avoided putting those on our website or on any of my personal info areas simply out of principle. They do me absolutely no good but I suppose if I plastered a couple of walls with them and invited people over it might look impressive(?).

Rank in the military sense is related to a term “time in grade” which means regardless of your knowledge, talent or abilities, you must spend at least a specific amount of time at one level before you can be promoted to the next. This is, in essence, a means of developing a type of maturity along with knowledge, ability and talent. Traditionally this concept has been the “rule” in most legitimate martial arts systems as well. However, the almighty dollar and the American (and others) craving for “instant gratification” has watered down the vast majority of systems and they end up inadvertently “selling” rank. Several offer a “Two Year Black Belt Program” with pre-paid dues, etc. Historically it has always taken 4 years (or very close to that) for one to earn a black belt regardless of how often he/she attends class.

Rank is a similar but often more sensitive issue. Unfortunately a great many people join a martial arts or self defense school or system strictly to “become a black belt”. The fallacy (or myth) here is posed (esp. in the U.S.) to make you believe that if you get a black belt “in my system” you will be all but indestructible on the street and you can handle any kind of conflict that may arise.

As an aside, there are usually at least a few people at larger seminars who “strut their stuff” by walking around with black belts covered in numerous stripes and/or other impressive designations, touting their Dan Rank or black belt level. More often than not these people will rarely get on the mat with someone who really knows what he/she is doing simply because they have not gone through the process properly…Instead they only cared about rank and showing it off. Much like some folks who buy season tickets to the opera and attend the performances knowing very little about what is going on. The goal here is that they want to be seen as an opera buff…

To the uninitiated, someone wearing a black belt, esp. with several stripes or other graphics indicating high rank, can be intimidating. To me, depending on the person’s demeanor, it has always been an indicator that this may be a good source of information and training.

To those who have gone through the right training, the “school of hard knocks” and have served their time in grade (calendar time and mat time) and who can perform in other than a totally controlled environment it is blatantly obvious that the rank has been earned.

Fact is that rather than strutting around flashing rank and stripes a legitimate black belt or other high ranking student (and yes, black belts are students too) will have a presence that subtly exudes confidence, an aura of knowledge and expertise (never cockiness). To those who know what to look for it is obvious who has earned their rank and who has not.

When a student has truly earned his/her rank, for those who have also earned theirs, it simply shows. These people are openly willing to help if you ask and will never try to embarrass you or have you do something that may get you injured. Very few of them got where they are without help from higher ranked people. Those who just got their rank by simply “being there” and paying their monthly dues will more often than not be bossy, pretend to know “everything” about whatever it is you are doing, etc. and will want to overtly try to control you.

How do you overcome something like this when it is happening? One of our students, a couple of years ago, was working with another student ranked a good bit lower than him. The lower ranked student was trying to “teach” and correct this guy and acted like he knew everything there was to know about the technique (he actually understood very little). This student got tired of it and simply said…”Look….I already have an instructor. I don’t need another one so just do the techniques”. It worked.

So let’s say you “get” rank, such as black belt. Are you really ready to start your own martial arts school? Do you have the background and knowledge to teach others what they need to learn? Are you really good at teaching? If you really are good at teaching, what do you have to teach and will you continue to learn more so that you will always have something else to teach? As you can see, rank in and of itself has almost nothing to do with anything unless it is legitimately earned.

I can say with absolute honesty that I never asked anyone for rank. In traditional martial arts systems that was a definite “no-no” as was asking when you would test next. It was (as it should be) totally up to the instructor (or perhaps a board of examiners, etc.) whether or not to test and/or promote you. Most of us do not really know when we are at that point no matter what we think. And yes, there will always be people promoted to and above your rank that are not “as good as you are” at what you do. There are always reasons beyond what YOU see that dictate what an instructor does. Unfortunately much of that cannot be explained in rational terms but it is true….There is always a reason….Learn to live with it and you will be much happier

In closing, we have had a number of people come by our ‘school’, walk in and say “I want to get a black belt in Krav Maga”. The discussions have typically been very short. I usually ask if that is really what they are after or do they want to learn what Krav Maga is and train in it. Regardless of the answer the truth is often obvious. If it seems certain that their only reason for coming by is to “get a black belt in Krav” I suggest that they try somewhere else. Odds are they are surprised, if not shocked, that nobody in our group at GMKM wears rank belts or advertises rank in any way. Sure, instructors have a few T Shirts with “instructor” written on them but that’s a different story. In our group those who are higher ranked are obvious and they help everyone else. They even help students higher ranked than them without thinking of protocol, etc. We are all here to learn and that is the way we think it should be. While wearing rank belts, etc. is and always has been optional in GMKM I am beyond pleased that nobody to date has ever done that. This makes us a little like a strange kind of “family” and everyone seems to like it that way. 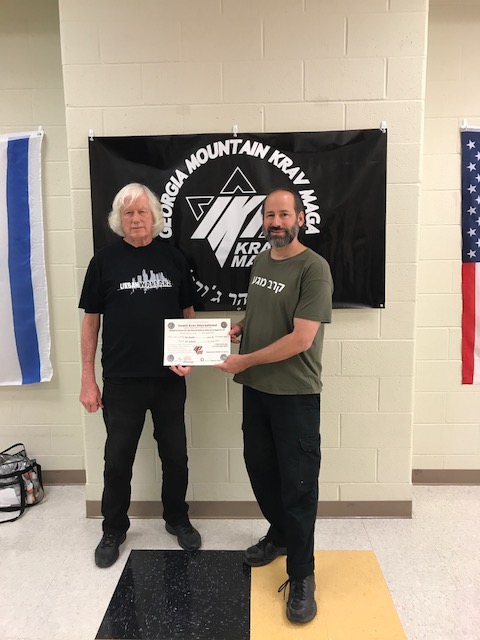