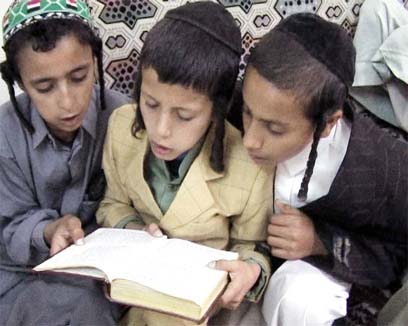 I grew up in Israel with many kids who immigrated to Israel from Yemen. Today I pray in a synagogue of Jews from Yemen. I have heard the same story repeated many times. The first time the teacher calls on you to recite the passage from the Bible and you do not have your finger and your eyes on the passage, the teacher looks at his leather strap hanging on the wall. The second time you were caught not paying attention he took it in his hand. The third time he smacked your fingers.

I was six years old and had just arrived in Israel. It was a long time ago, different values, a different world. It was recess and I was having difficulty with a homework assignment, a certain Biblical passage alluded me. I asked my friends but none knew the answer. "Never mind", I said, "After recess I shall ask the teacher."

"Ezra?" I said, "the only Ezra I know is the school janitor".

Confused I went over to Ezra. The scene is still in my mind. Ezra was near the principals' office, I can still see it now. I said "May I asked you about a Biblical passage", and I proceeded with my question. He paused from his work, lay his broom against the wall and recited not only the verse I needed but the entire chapter.

Wow, why was this man the school janitor and not the school principal, I thought. Later I would learn the answer, how the Jews from Yemen were mistreated. But that is for another time.

I could not understand how a simple Jew, the janitor, apparently knew the Bible by heart, word for word. Only later would I hear about the leather strap and how the students came to respect and obey the teacher. I have only heard them praise their teachers, the "Mori", and express how thankful they are. The proof is now they send their own children to the traditional Mori, this is not part of the school program.

The result of taking some minor, mild, rebuke was a generation that knew the Bible by heart. Yes, it is true, this is not exaggeration. I have experienced it myself. But today such methods are no longer allowed, the old ways are gone. The authority of the teacher has eroded. My mother told that during a school meeting suddenly the Yemenite rabbi entered. Every single Yemenite Jew in the crowd, men, women and children, rose at once. Such respect!

I consider myself a gentle teacher. In fact I have come across ridicule and mocking (anonymously over the internet) for not being a "Bad Ass". I take the abuse and the insults and shrug them off. I have been insulted by better people. Among those who insulted me where many of my teachers, certainly as I was coming up the ranks I was rebuked, mocked and berated publicly plenty of times. I never took it to heart, I never took it as a personal insult. It is only the intent that matters. Sometimes teachers get frustrated. They show you something, again and again, and you still get it wrong. Happens. We deal with it.

Being a teacher is not an easy task. One is required to have the wisdom of a sage, the foresight of a prophet and the patience of a saint (a fictitious concept) and at the first sign of impatience a teacher is stoned to death and hung out to dry.

Sometimes students of our instructors write to me "discretely" about their instructors. I listen but I listen closely before forming any opinion. One should be careful with judging teachers because good teachers are hard to find and very few last long in this profession. The world is full of successful ex teachers who made their mark elsewhere.  Gene Simmons, known to us as Chaim Witz, of the rock band Kiss, was a school teacher.

The very profession is mocked with sayings like "Those who can do - do. Those who cannot do - teach." How untrue and unfair. Where would the future be without our teachers who labor night and day for the future of mankind?

All teachers; school teachers, aerobic instructors, martial arts teachers, kindergarten teachers, university professors, should be honored and respected. In Judaism this principle is reinforced from childhood; a teacher is to be honored as a parent.

For those about to teach, we salute you.