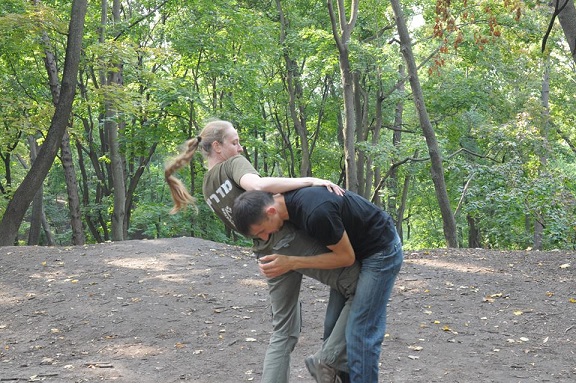 Here is a situation: Dangerous knife attack, other styles of Krav Maga and Jujitsu offer a knife disarm. They block or grab the opponents arm, put the attacker into a lock and then easily peel off the knife. Some even use "Police Krav Maga" and put on handcuffs.

More than once I was asked about Krav Maga handcuffing techniques. But I never heard of such a concept before. Some even asked me about "Krav Maga driving". I do not know where people get such ideas.

In the eighteen years of training with my instructor I never heard of any of those concepts. And by the way, for all those who train for 6 months and then decide to become "grandmasters", yes, I trained for several years in Karate, Judo, Kung Fu and kickboxing, followed by 18 years of nearly daily training with my teacher before I ventured out on my own, and then only with his permission and blessing.

So people come up to me at seminars and ask for disarms against knife attacks. The IKI approach is the same as the great Danny Innosanto, "Knife disarms are incidental if not accidental". In plane English, you are most likely to get killed trying to disarm a violent street thug with a blade in his hands.

You have been warned.

The IKI approach is to block, hit key points aggressively, disengage as soon as possible.

And then comes the Classic Question: But what if you are not alone?
What if your wife and children are with you?

Yes, we do have an answer for that.

But first.. a story.

My brother's mother in law spent her youth in the Auschwitz death camp/concentration camp. She lost most of her family and saw thousands of Jews being killed daily. Until today she suffers from nightmares as do most Holocaust survivors.  She had only two children. She was asked why only two? The norm among the Orthodox is to have many children.

Her answer send chills down my spin, "I have only two arms, I never wanted to have more children than I have arms to hold them and protect them".

What a sad way to live.

How does this relate to knife defense?

You cannot spend your life protecting your children by constantly holding on to them. It is not practical. And if you are fighting off an attacker you will certainly not be able to hold on to any children. The answer is you must train your children.

It is the same with knife defense. We must train our children, staff, family, how to behave in a time of crises.

Thus the answer is not always in the technique. Too many schools focus only on the technique but they fail to recognize that this is a huge mistake. The techniques is only part of the solution, it can never be the entire solution.

The fire department will put out the fire, but the children must be trained how to behave in such a situation. There is no need for the teachers to die trying to put out the fire. There is no need for anyone to give up his life trying to disarm a knife wielding attacker. The correct solution is to train those around how to behave in an emergency situation.

Not long ago in Israel a couple and their children were driving to the Passover Seder. (please see Passover murder). The husband was shot dead by terrorists while driving. What happened next?

What could have happened is the wife screaming hysterically, the children crying, And then they would have lost control of the car, crashed and the Arab terrorists would come over and confirm that all are dead. Each member of the family would receive a personal bullet.

The man who was killed was a veteran warrior, and his family was properly trained. His wife pushed her dead husbands' leg aside, gained control of the car, told the kids to lie down on the car floor as the terrorists were still firing. She saved her family. That is how "innocent bystanders" should behave.

Bottom line: Instead of thinking that you must personally disarm the knife attacker in order to protect the others, you should train to hit and run, save your life and pre-train, prepare your family in advance to know how to respond in an emergency situation.

Do not train your teachers to put out the fire and carry out the kids. It will never work.

Invite Moshe Katz for a seminar an learn the IKI way to practical self-defense.

Find an IKI Krav Maga Instructor near you