One of those questions. Do the dead hear us? Do they know if we pray for them, speak to them?

Do they hear us, do they answer?

The living shall never know with certainty, but the conversation still goes on.

Radomsko, a little town in Poland, near Łódź, the hotel Zameczek knows how to keep a kosher kitchen to accommodate the Hasidim, the devout followers of the Radomsker Rebbe, the Tiferes Shlomo, the first leader of this group, now long since dead.

The town of Radomsko was occupied and most of its Jews deported and killed during the German occupation of Poland during World War II. The fourth Radomsker Rebbe, Rabbi Shlomo Chanoch Hakohen Rabinowicz, was murdered by the Nazis in the Warsaw Ghetto in 1942, bringing the father-to-son dynasty to an end.

But the followers still come. They return to the place their rebbes, their spiritual leaders, lived and studied and prayed. And the local Polish population can't make any sense of it.

And we come. We come to Warsaw and we come to Ukraine, to Russia and Hungary and Slovakia, and we come to wherever our ancestors died, and we chat with them. It is more than paying our respect, it is an on-going conversation. We are telling them that as long as we keep their ways, their lives were not wasted, their deaths not in vain. 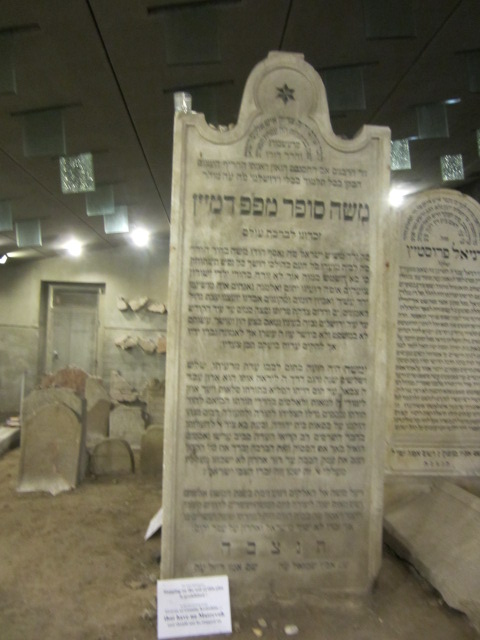 After teaching a week long Krav Maga seminar in Slovakia I visited the tomb of Moshe Schreiber a.k.a. Moshe Sofer, a great rabbi who passed away in 1839.

My great grandparents in Brooklyn, NY, bought a bench to be placed near their final resting place. They asked that the family come visit, have a picnic, and chat, like old times.

But the dead do speak to us, in many ways. When my dear brother Ethan was going through the most difficult part of his IDF training, he felt the dead.  He wrote to us that as he was crawling on his belly through a field filled with thorns, or a field of mud, he felt our people with him. What would a Jew in Poland have given to be in my shoes? he asked, to be wearing the uniform of the Israeli army, to be a proud soldier of Israel carrying the latest model rifle?

What would our ancestors have given to be in our boots.

Yes, they talk to us, and the question is, do we listen?

When I see a Jew who is detached from his people, his religion, his heritage and his glorious history, I understand; there can be only one reason, he has left the conversation, he has stopped listening.

Do not be as Esau who sacrificed his birthright for a bowl of lentils.

The dead speak if we listen.

When my mother was a young girl she asked my grandfather, Rabbi Isaac Klein of blessed memory, "Why does God no longer speak to us, like he did with our Biblical prophets?"

"Do you hear music now?"

The conversation never ends. We love to talk. But we also must learn to listen.

With Krav Maga we are also listening. We are listening to those who were not prepared, who had not followed the Biblical advice of "Pray for peace but prepare for war". We listen to those who died and implore us; do not be caught unprepared! Train to fight back.

We listen, we remember, and we prepare for a better future. Pray for peace but prepare for war.

Still true after all these years.