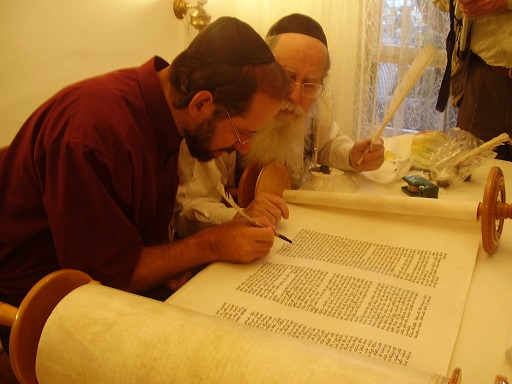 This is the Written word, copied by scribes, with a feather pen, written on parchment, from generation to generation for thousands of years. The Torah, the Book of Instructions.

There is an old Chinese saying that the weakest ink is better than the strongest memory, and there is a great deal of truth to this. The Jewish people are strong advocates of this concept and we have been recording our history, our law, and our folklore for over 3,500 years. Thus we are known as the people of the book.

Throughout the European Middle Ages Jews were valued and sought after as scribes and translators. Jews could read and write, and spoke many languages. Our reputation as the people of the book was well founded. As much as Jews were largely hated, despised and persecuted during most of European history wise kings still sought after and acquired what became known as the Court Jew. Everyone needed to have one. The kings of Europe had Jewish physicians, Jewish treasurers, scribes and translators. One of my ancestors, Don Isaac Abarbanel, was such a man, helping out King Ferdinand and Queen Isabelle of Spain in the 15th century.

We have certainly always been eager to write down our interpretations of the Holy Scriptures and commentaries on Jewish law. So we are certainly in favor of the written word.

In Jewish tradition we have the Torah, the written word, as recorded by the ancient Hebrews. This book is known to the Gentiles as the Bible, or Biblio, i.e. The Book. But we also had unwritten laws and traditions and these were forbidden to be written down.

What was the fear? The main fear was that by writing it down, it would come fossilized, stale, dead. The law needed to remain alive, ever-changing and adaptable while staying true to the original purpose. This tradition continues until today, and yet there are those who become attached only to the written word. To remain alive, relevant and practical the law was not to be written down, it must not become stagnant.

Due to the precarious state of the Jewish people after the Jewish - Roman wars, several rabbis decided to put into book form their own personal notes. Thus the Oral Law also was written down, in order that it should not be lost, but the principle of being alive and flexible is maintained.

But there another reason for not writing down laws; it weakens the memory skill. Think of it this way, most of us older people as children knew dozens of phone numbers by heart. Today with cell phones you never need to dial a number, so you do not remember the numbers even if you call the person daily. Now if you lost your phone, your data base, you are in deep trouble. In the good old days you knew your parents numbers by heart, your grand parents and your best friends. In this way we were better off using our memory still rather than technology. My dad could get anywhere, he did not have a GPS, nowadays no one needs to remember anything.

The Druids, in old Britain, could not write, or perhaps chose not to write. But they had their entire ritual memorized. The down side is that it is now lost to us as it was never recorded.

Many African tribes had elders who memorized genealogies going back hundreds of years, can anyone do that today? There is no longer a need and the skill is lost. It was said that when one of these old men died it was like a library burning down.

Thus there is a plus but also a minus in the written word, the written culture, yes it is a great way to preserve knowledge, facts, data, but we lose the skill to remember properly and we lose the Aliveness of the wisdom. All we are left with are dry facts.

This need to keep the memory accurate, and not to rely only on the written word, is partially preserved in our modern synagogues. We read the Torah out of the a scroll, not a book. There are no paragraphs, no punctuation marks, no sign whatsoever where one sentence ends and another begins. In addition it must be chanted according to a certain musical notation, and yet there are no musical notations in the scroll. All this information must be memorized. To read one paragraph correctly could take many hours of preparation.

And now let us apply all this to the study of Krav Maga self defense.

There are those who write such things as a "Bible of Krav Maga", I am opposed to this, (as well as the arrogant title of the book). Notes have their place but Krav Maga cannot be confined to a book, with set doctrine, photographs and step by step instructions. Self defense is not a 'color by numbers book', it is a blank canvass with many confusing colors to choose from.

When I was a student I kept exact notes, and still have many volumes of notes from those days. But these days, with IKI, I only keep notes as guidelines for seminars. The real knowledge is not written anywhere, nor do I keep a vast library of videos, it is all in my head. And this way I am not relying upon notes, nor am I relying upon wrote or memorization. I am relying upon understanding.

I understand the concepts and therefore I no longer need the notes. This is a different level of understanding.

Without formal notes our mind becomes our library, our computer, or guidebook.