Time is one of the most illusive elements of life. We all have the same amount of Time in a week, in a day. We all know about Time. Since ancient Times man has found ways to measure Time, to mark the passing of Time, to commemorate Time. Calendars, the moon, the sun, the stars, the constellations, to measure and to mark...Time. The ancient Egyptians, the Hebrews, the Incas, the Mayans all had a culture based on time, the seasons and calendars.

And yet Time is infinite and measureless. You cannot "save" Time, you cannot deposit Time in a bank and take out more Time when you are running short. And when Time runs out…game over and no amount of money can buy you more.

We want more Time; we are hungry for it. We will spend much money on "Time saving" devices. Anyone who has a plan to save us Time will have our attention, and soon…also our money.

Yet those who chase Time never seem to have enough of it.

Time, we want it, we crave it and yet we cannot own it. We cannot control Time but if we are not careful – Time can control us. The more we chase Time the more it eludes us and the more we are lacking.

The old Japanese tale tells of the impatient Samurai warrior who wanted a quick bowl of miso soup. But the old chef took his Time. The Samurai kept asking, how much more Time will this take? I want it now! But the chef kept the Samurai waiting. When the miso soup was finally ready the Samurai eagerly consumed it. He said it was the best he ever had, but what is the secret ingredient that makes it so delicious? The old Japanese master answered him, "Time."

Moshe Katz, a long Time ago, 1990's, putting in the necessary Time. With Roni Kluger of the Wingate Institute, Netanya, Israel.

SomeTimes I am teaching, the same old stuff, a kick, a punch, a block.  A student will ask me a question and as I am answering it will occur to me that I have actually accumulated a great deal of knowledge on this subject, and this surprises me as it is only a kick, a punch.

But I realize that Time does its thing and that in Time I have absorbed a great deal. By doing the same thing again and again for so much Time I have actually become something of an expert.

Recently I needed to replace a door in our school. I called a man from the Yellow pages, I took a gamble. His name is Moshe. The man can go on and on about doors. I asked him a question and he begins, "Moshe my friend, I have been in the door business for 25 years. Let me tell you about doors."

That sold me; the man has Time under his belt. He did not take a quick course. He is not some brash young man who is trained to make a "sell" and "close the deal." He is not trying to sell me as much as he possible can once I let him past my door, which by the way is the exact approach of the major leading martial arts associations.

These associations are businesses, pure and simple. Read the trade magazines: they approach martial arts as the "martial arts business." The trade magazines do not deal with questions of self defense or how to survive.  They deal with image and profits.  They buy and sell schools and create franchises, just like McDonald's. Would you like some fries with your Krav?

So members sign up and they pay big dollars and they learn many things: marketing, business, advertising, how to "close the deal!!" and how to sell as much as possible to each and every client (not "student").

But they do not become experts. They are not like my new friend Moshe who has 25 years in the door business; they are not the Japanese Miso master. They are not what I am interested in. They do not contribute to the world, they only take and detract. 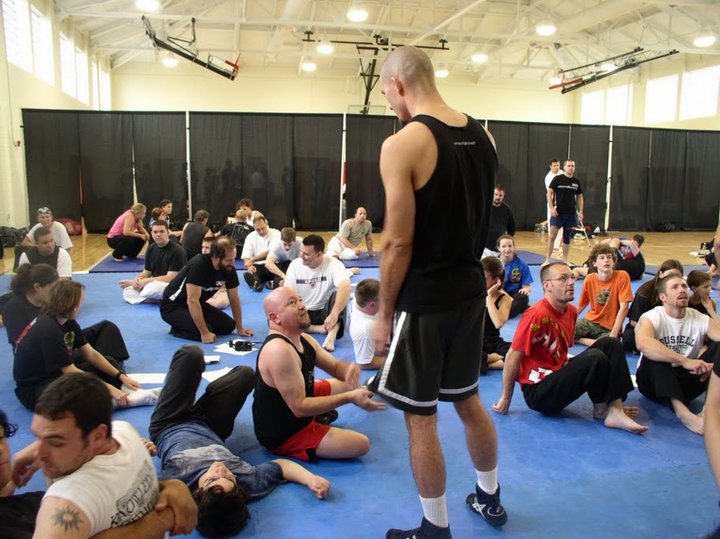 Moshe Katz at Karate College, 2002, (left side, seated, in black) with stack of notes and camera, always the student, putting in Time.

Moshe the door guy made a special trip to my house after hours. He came to sell me doors (and he needs the money), but then he said, "Moshe, let me tell you something, my father raised an honest son. I can fix your old door. You do not have to buy a new door."

I decided to upgrade to a new door for the dojo but I know one thing for sure, when it comes to doors I am sticking with Moshe.

If your students see that you made yourself Grand Master, or that you jumped to 9th dan when you switched organizations, or that you switch organizations every other year,  they will have so much respect for you that you will be able to store it in a salt shaker and still have plenty of room for the salt. But if you stay with the same teacher for years, your students will stay with you as well. You lead by example.

I recall my teacher at Wingate, Roni Kluger, he told us of his trip to Okinawa where he saw the "student," a 9th dan black belt of 80 years old, bringing his 10th dan 83 year old teacher a pair of slippers. They had been together since their teens. That is called sticking to something.

Time, we cannot control it, we cannot stop it, but we can learn to use it wisely.

Use your time wisely. Upgrade your Krav Maga skills with video clips from Israel directly to your personal e mail. Be on the cutting edge of Krav Maga. Don't be left behind the times.