Once again America was caught unprepared, once again all that was left was to cry, spread condolences on Facebook, and bury the dead.

Once again people cried out "it is the guns that are to blame!" as if guns kill by themselves and as if one can ever eliminate guns.

Eliminating guns is like eliminating liquor, prostitution or marijuana; it will never be possible.

With all the sad, mournful, comments on Facebook, which with all due respect help no one very much, I found one comment that shed some light on the situation. One comment, by an American woman whom I do not know personally, and one photo,.

She was commenting on a photo attached by my dear Rhiannon, of a school teacher in Israel, with a rifle slung over her shoulder (this is standard required practice in Israel, we learned our lessons the hard way, and fast), and she wrote the following words:

"Rhiannon, that’s such a powerful photo on several levels. I am a supporter of Israel and the IDF. This teacher has probably had over two years of intense training and military service involving the use of that weapon. She may also be an off-duty reservist, and encouraged to carry her service weapon while off-duty. Israeli teachers are permitted to have guns to protect their students because terrorists have on occasion attacked groups of schoolchildren. But Israel is a very different society than ours and has a very different attitude and perception about firearms, one that is more respectful of and responsible to guns as necessary tools in their everyday lives to protect them from even greater, more wide-spread harms.

I think what I'm saying - and I'm saying this as a woman who began training in the use of firearms when I was not much older than the children in that photo (probably about the age of the dear children who were lost on Friday): dozens of factors would have to change in our attitudes as individuals and as a society, before the U.S. would be ready for what's in that photo. Israel has been through *a lot* to get there, and most of those lessons were very hard-earned - and I would not trade places with them. " (Brenda) 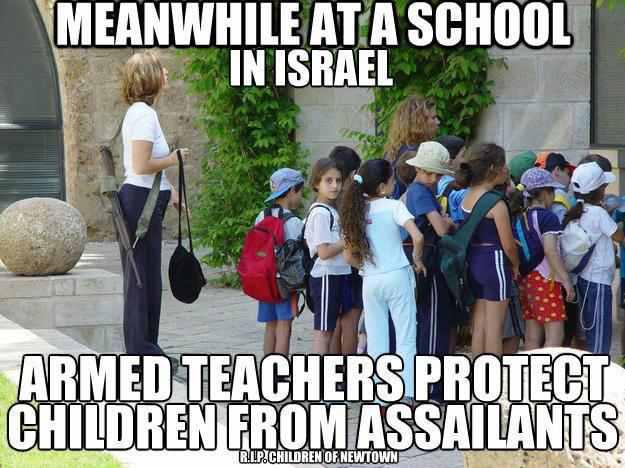 We have been raised with tragedies; we inherit them from our ancestors and we drink them in with our "mothers' milk"; Holocaust, pogroms, massacres, blood libels, inquisitions, expulsions, you name it, we have been to hell and back.

And as this woman points out, our history has led to a very special mind-set, and it is precisely this mind-set which I analyze in my book, (see below), Israel, A Nation of Warriors.

We look at this tragedy, only the most recent in a series of American tragedies, all of which took place without any serious opposition or self-defense, and we ask, what could have been done differently?

The answer is - Everything!

As one rabbi said years ago, "The answer could fill volumes", but I will just make a few points.

The police arrived on the scene in time to count the dead. There is no way any police force, even the best, can arrive on time to make a difference. The best defense is a well trained civilian population.

In Israel, when a terrorist lets loose in town it has always been armed and trained civilians, who happened to be on the scene, who neutralized the terrorist. (In my book, see below, I have an entire chapter devoted to such stories).

It is said we have a "secret" anti terrorist squad, ordinary citizens walking around town, ready to react. Plus of course we have amazing, well trained, anti terrorist teams all over the country and they do arrive on time to the scene. But they are not your ordinary local police.

In this tragic case, in Connecticut, there were only women on hand, school teachers, so what could they do?

As the photo shows...Israeli women, and teachers, are different.

Israeli women, don't mess with them!

An Israeli female soldier of the Karakal unit stormed, shot and killed a terrorist.

An Israeli mother, using Krav Maga, defended herself and her four young children against a terrorist, beat him up and locked him in the bathroom. He was shot by the men as he attempted to escape.

An Israeli woman, a member of the Border Police, shot and killed a terrorist who attacked their position.

So much for the theory of the helpless female.

From what I read in the papers at least one of the teachers had a brief "conversation" with the killer before she was killed. What we teach, IKI Krav Maga, is that this was the window of opportunity, the chance to use those precious seconds to disarm the attacker. This is what we train for.

Sometimes, when teaching gun disarms, I am asked by my students, 'But isn't' it risky? guns are dangerous, would it not be better to simply comply?"

And my answer is always the same, we only use these techniques when the choice is death or resist. If he wants money, sure, give him the money. But what if he wants your life? and the lives of those around you, what then?

Then, is when you say, time for Krav Maga!

This young man, quiet boy turned killer, again was the kind of guy no one expected this sort of behavior from. And that is my point; be prepared to defend yourself at all times because you never know when or where this sort of thing can happen.

As the boy scouts say, be prepared always.

Who are the Israeli people?

How did the Israeli population develop their unique mind-set and become the best trained population in the world, where ordinary citizens battle and defeat terrorists.?