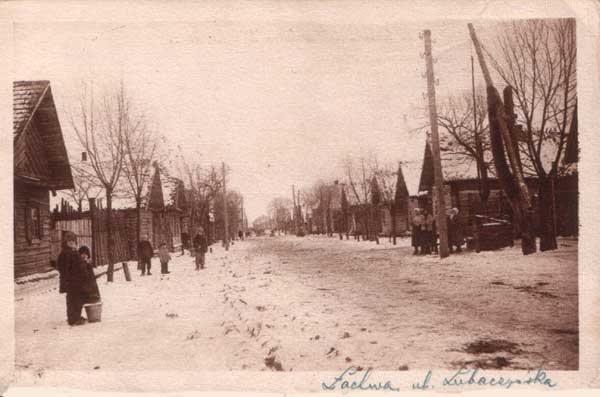 June 1941, Lakhva, Belarus (or Poland, or part of the USSR). The Wehrmacht (German army) invades the Soviet Union. Stalin's army is not prepared. Town by town the Nazi army takes over and along with them come their death squads. Local volunteers are easy to find; they help round up the Jews, seal off the area while the Jews are being shot in mass executions. Local police volunteer to help shoot the Jews.

July 1941, now it is the turn of the Jews of Lakhva. They have been living on this land since the 17th century. Now they constitute sixty percent of the population of the town. Lakhva, to the Jews, is known as a shtetl, one of countless little Jewish villages in Eastern Europe. After the war no such shtetls would exist anymore.

The head of the Judenrat, the Jewish council, was approached by the Germans, he was offered a deal. If he would keep the Jews calm and convince them that the Germans meant no harm, and cooperated, he and his family would be spared. He said, no deal, and returned to the ghetto to warn the people.

The Jews by nature are law abiding and trusting citizens. Town by town they went to their deaths without any "trouble", the Germans expected no trouble here, but a surprise awaited them.

The Jews prepared, with knives, axes, a few guns, a machine gun on top of the synagogue, and a plan. As the Germans approached they set several houses on fire and then stormed the Germans. The Germans were stunned. Several were killed. The Jews knew that they would die, but with honor. The revolt was either the first, or one of the first, of its kind. It was led by Icchak Rochczyn.

But what caused this change in attitude?

Those who witnessed the events said that at a certain point the Jews understood what was going on, after all they heard the news, shtetl after shtetl were destroyed by the Germans. Communities that had existed for hundreds of years were wiped out in a day. The 2,300 Jews of Lakhva no longer had any illusions.

At a certain point, one witness recalled, they realized that no one would come to save them, that they had to fight for themselves. There was a turning point when this sudden realization sunk in. The resistance movement was formed.

We too like to live with illusions. We like to feel that the trouble and bad stuff will never come our way. We are safe as long as we ignore the truth and reality. But at a certain point, some of us reach the turning point, where the truth sinks in and at that moment all the excuses disappear. Suddenly we have time and money to train. Suddenly we need to be part of the underground, we realize that no one is coming to save us, we need to fight for ourselves.

Today we remember the Jews of Lakhva, a small shtetl in Belarus that no longer exists.

Lakhva 2018, people walk around. A journalist comes to ask questions. Do people remember the Jewish history of this town? Do they know that it was once 60% Jewish?
Jews? Really? Jews once lived here? I did not know.

But we know, and we remember, and we train in their honor. Today is our Turning Point.