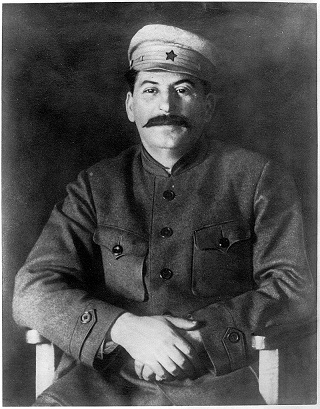 Joseph Stalin in his younger years. 1920.

My brother took out travel insurance. He was hit by a van while riding his bicycle. He was in the hospital for a long time and then was flown home in business class. Insurance paid off. Life is a gamble. Whom can we trust, whom should we be wary of? Are we paranoid for watching the people around us, or just cautious and responsible? What kind of insurance or assurances do we need in life? Stalin trusted no-one but ironically the one man he trusted was the most evil; Adolf Hitler. He truly trusted Hitler. When Germany attacked the USSR Stalin was convinced that somehow Herr Hitler did not know about it.

Stalin; one of the most controversial and intriguing historical figures. The free world owes him a tremendous debt of gratitude, to this very day he is admired, worshipped in Russia, and yet he too was a truly evil man who is said to have had no regard for human life. He was loved, hated and feared. Winston Churchill came to like him.

We are still fascinated by Stalin, the man of steel.

Born in Georgia as  Ioseb Besarionis dzе Jughashvili, Stalin's father was a shoemaker, the family lived in poverty. His mother was a devout Christian who hoped her soon would join the clergy, at one point he studied at an Orthodox Spiritual Seminar. His father fell on hard times, became an abusive alcoholic and ruthlessly beat his wife and son. His mother Ekaterina left her husband and she and her son began a wandering life. Stalin grew up tough. He was a hardened man who became even more hardened as life grew harsher. But yet he could also be a smiley laughing man, a charmer. Stalin was a clever man and it is said he built his career on being underestimated.

He did not have the gift of oratory, he was not the original thinker that Vladimir Lenin, Vladimir Ilyich Ulyanov, was, he did not have the brilliance of Lev Bronstein, known as Leon Trotsky. He had a deformed arm, and facial scars from childhood smallpox. But he was tough, hard working and totally ruthless, he was determined and he was often overlooked. Underestimating such a man is a huge mistake. This mistake took the lives of millions of people.

Overlooked and underestimated he quietly built his power base. Eventually he became the leader of the Soviet Union and the rest is history. There is much that can and should be learned from his life. My point today is the danger of overlooking power hungry individuals, underestimating individuals as unworthy opponents or challengers. When Churchill first met Stalin he did not think much of him, and yet Stalin saved Great Britain from destruction. A wise man underestimates no one.

Over the years I have been asked many silly questions such as; as a Krav Maga expert how many men can you take on at once? or, would you be able to defeat so and so in a fight?

My answer is always the same; we will never know until it happens. There is no way to predict what will happen in a real fight for survival. Underestimate no man. A short man, a fat man, an old man; underestimate no one. You don't know what is inside their minds. Many of the toughest, most ruthless gangsters were short, or overweight. Many an old man was once a young warrior and he can still kill you in under thirty seconds. Underestimate these people at your own risk.

Can you defend yourself?