Use What You Can
By Moshe Katz
CEO
Israeli Krav International

Yesterday a friend commented about a relative who served as a pilot during the war. After the war he was thinking of making a career out of flying but was advised by friends that "Jews need not apply".

I personally know a Jewish pilot and perhaps things have changed a bit over the years in the profession but the point is that in the United States and in all of the world for most of the past two thousand years many professions were closed to Jews.

Jews went to university, worked hard and earned medical degrees. Thus the oft repeated "accusation" that Jews "dominate the medical profession", as if being a doctor is a bad thing.

Yes, certain professions were open to Jews and they succeeded in those professions but who speaks of the many professions, the many doors, that were closed to Jews? Jews developed the banking industry because that was one area that European Christians disdained. Jews became the tax and rent collectors in Eastern Europe because no one else wanted that job. And so for these "reasons" the Jews were hated, despised, and massacred without mercy.

Simply put, Jews and other immigrants used whatever they could to survive. Irish Americans became police officers, Italians "dominated" the pizza industry.

Our techniques work with what you've got, not with what you once had or wish you had. A 90 pound woman will not, cannot, fight off a heavy weight boxer in a fair fight. A small man cannot reasonably expect to out muscle a large man. So we adapt.

We adapt and we create a system not based on strength, speed, power or flexibility. Like any good hard working immigrant we focus on what you can do. If you have a heavy foreign accent  it might not be advisable to apply for a radio job where perfect English is required. If there is discrimination in a field, avoid it. In California most of the gardeners are Mexicans, they work hard for a fair price. They "dominate" this profession because few other jobs were open to them. Use what you can and succeed.

That is our approach to Krav Maga; use what you have, work with what you've got. And get home safely.

Join Us in Israel
for an experience of a lifetime 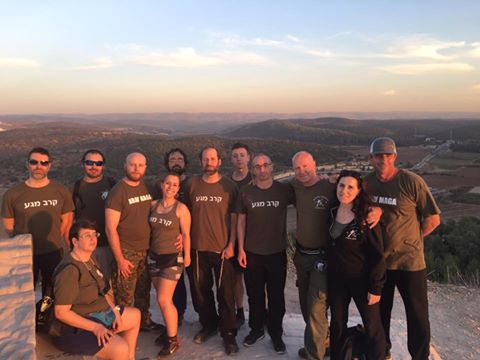