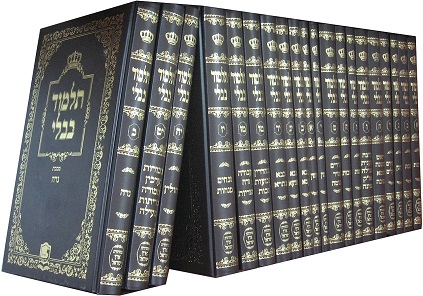 Full set of the Babylonian Talmud

The Talmud is the core of all Jewish law, customs and daily life. It began as an oral tradition, the teachings of the rabbis, the interpretation of the Hebrew Bible and the laws passed down from Moses. This was called the Oral Law and each generation learned it, discussed it and debated it. Such is the nature of our people.

In the first century this oral tradition was challenged by the uncertainly of the times; Roman conquest, wars death, the destruction of the holy temple in Jerusalem, the exile of the people and the rise of alternative faiths. With all this turbulence the rabbis made the bold decision to begin writing down the teachings that until now had been memorized. This took about 500 years.

The Talmud is written in ancient Hebrew, Aramaic, with some Greek and Latin. In addition, in the over 2,700 large double sided pages, there is no punctuation. As such it is a very challenging task to understand.

They say that Jews make good lawyers because we have been studying the Talmud for so long. Indeed this makes sense. One needs to be open minded and be willing to have their faith, and their ideas challenged. I recall a fellow student saying to me one day, Tell me what you know and I will attack it! (i.e. strongly question it). Much like Krav Maga one must be ready for an attack at any moment. Sometimes the "heat" rises and debates can get loud and emotional, but it is all for the sake of wisdom and one should not take it personally. When we debate the Talmud, the old rabbis come back to life, indeed they have never died. They are alive on our pages, as long as we study them, they live! and the basis of all our study is - We do not have to agree.

The Talmud covers faith, Jewish law and custom, financial transactions, contracts, tradition, history, mythology, folklore, marriage, sexual relations, demons (Shedim), and philosophy. As the Talmud is basically a 500 year on-going discussion/argument, one never knows what discussion will pop up next. One topic leads to another and often the rabbis go a little off topic, on an interesting detour.

In studying the tractate Sabbath I came across some interesting passages..

Viter, (Yiddish... We continue), Rabbi Yehuda said in the name of Rab: Of all that the Holy One, blessed be He, created in His world, He did not create a single thing without purpose. Thus He created the snail as a remedy for a scab, the fly as an antidote to the hornet's sting, the mosquito crushed for a serpent's bite, a serpent as a remedy for an eruption and a crushed spider as a remedy for a scorpions bite. ....(Tractate Sabbath, page 77B)

What does this mean?  It is not entirely clear, but the message is that there is a time and a circumstance when the weak can overcome the strong. Let's look at each case;

The mafgia, some say this is the Ethiopian gnat. It makes an unusually loud noise and terrifies the lion (Rabbi Shlomo Yizhaki, Troyes, France and Worms, 1040 - 1105).

The Mosquito enters the elephants' trunk, many at a time, and sting him. The spider lodges itself in the ear of the scorpion. The swallow creeps under the wings of the eagle and prevents it from spreading its wings. Another interpretation is that sometimes many swallows can surround a bird of prey and chase it away.

The kilbith is a small fish that can attack the Leviathan by entering its ear, or by its sheer numbers. What is the leviathan? we are not certain. What is the kilbith? We are not certain, some modern scholars say it might be a stickleback. However there is a Krav Maga message here; the smaller one can defeat, or scare off, the larger predators, if he knows how.

The Talmud continues with a source for this. It is a common Talmudic practice to seek a verse upon which to base a lesson, and here it comes from the Prophet Amos.

Rabbi Yehuda said in Rabs' name: What verse? (i.e. what verse can we base this lesson on?) 'That strengthen the despoiled over the strong." (Amos, chapter 5, verse 9).

Now this verse too is unclear. The Hebrew is very unusual and difficult to understand, another translation reads..."That causeth destruction to flash upon the strong, so that destruction cometh upon the fortress".

There is one key word that is confusing to most translators but all we really need to do is read the Aramaic translation of Onkelos. Onkelos, also know as Aquila, was a first century Roman who converted to Judaism. The translation takes place around the year 110 C.E.

Now that makes sense, and fits in with our concept of Krav Maga; the weak, properly trained, shall overcome the Bad Ass Tough Guys, and take control over their defenses. (fortified fortress).

I like the commentaries of Rabbi David Altschuler, (1687 - 1769), he adds; and thus shall come utter destruction and ruin upon the fortresses which you trust in.

Putting all this into an IKI Krav Maga perspective, what we have is that the physically weaker, even against huge opponents, the elephant, or the lion, can overcome if using the correct defense/attack. The Ethiopian gnat need not become a lion, the tiny mosquito can overcome the huge elephant. And we, properly trained, can overcome our adversaries.

There will always be beast of prey, and we must learn to survive in this world.