While You Celebrate
By Moshe Katz
CEO
Israeli Krav International 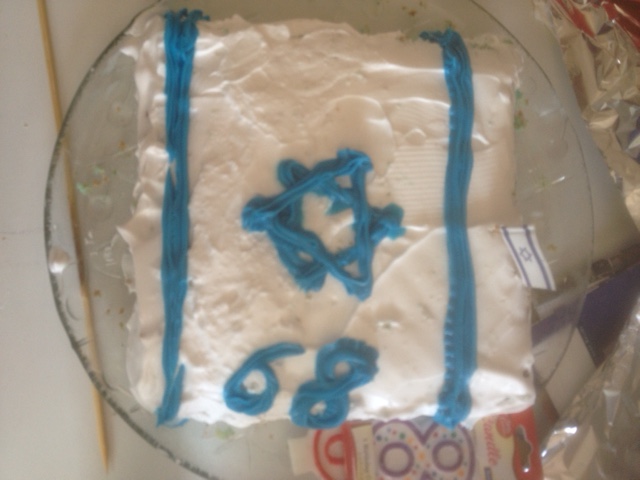 Independence Day cake by Mom. When she was born there was no State of Israel. Her father and Uncles and cousins went off to war to fight for freedom. Other relatives, those left behind in Europe, went to slave work battalions, and...Auschwitz.

Today we celebrate Israeli Independence. Every nation celebrates its independence in one way or another.  For most their moment of independence is not even a vague memory, it is simply a reason for a party, and a day off. Most do not know their history, cannot name famous generals or war heroes, cannot tell you anything about their nations wars. They have never really known a soldier and have no concept of what it is not to be free.

In Israel it is different. In Israel we know.

Most of us have grandparents, or parents, who were persecuted in one way or another, in Arabs lands, in European lands, in Gulags, concentration camps and "work battalions" (slavery). We have spent close to two thousand years tasting what it means to be not free.

We know that our Dry Bones came back to life, bone to bone and limb to limb, and came home. Here they were met with hostility, anger, intransigence and pure hatred. All our wars have been defensive, none have been wars of aggression.

And we know that the war is not over, the war for Independence, the war for freedom. We know that we have but two options; to fight or to return to the Gulags, the "camps", the Inquisitions, the hatred, to...Auschwitz. Many in Europe are still waiting to "finish the job".

While we celebrate others are in uniform, with helmets, with heavy equipment, with rifles, watching nervously all around them, never knowing when the next encounter with terrorists will take place. While we have fun they are on guard.

So let us never forget that while we celebrate others are working hard to guarantee that we can continue to celebrate life and freedom. Let this not be a frivolous day of fun but a day of serious gratefulness.

Blogs from the year 2014 adapted for book form. It is about life, happiness, success and Krav Maga.  (original art work by Paratrooper Arie Katz)