Window of Opportunity
By Moshe Katz

"And it came to pass at the end of forty days and Noah opened the window of the ark, which he had made."   (Bereshith, Chapter 8)

Imagine. The worst flood the world had ever seen. It is recorded by every ancient culture in the region, the remains of the ark have been found in Turkey, just as the Torah described.

Some call him Noah, others call him Gilgamesh, but all cultures describe the flood that devastated the world as they knew it.

The world as they knew it was coming to an end.

Imagine, all the people you know will soon be dead, your world is dying but a new world, a new life will emerge.

Actually for many Jews this is not so difficult to imagine as this has been the story of the Jewish people for many many centuries, in many lands.

Noah saw it coming and prepared. The rain came down hard, all that he had ever known was being destroyed. He and his family and the animals entered the ark, but when would they emerge? And what would they emerge to?

Imagine, all you know will soon be gone, the people, the buildings, the landscape.

The unknown is perhaps the most dreaded of all fates. No one could say what would unfold.

In a sense this is life for all of us. Things we know come to an end; jobs, relationships, places we know and love. The old must time for the new to emerge.

We find ourselves in new locations, far from where we grew up. The journey of life takes scary twists and turns.

The question is how do we cope?

For some it is the end of life as they know it and they simply give up. They spend the rest of their lives talking about the good old days while they are unable to create the good new days.

Noah was indeed facing a critical point in his life, the life of his family, and the life of all mankind.

...and after forty days Noah opened the window that he had made.

We ask for a chance, we ask for a break to come our way but we are inactive in this activity. We want it all handed to us. But what did Noah do?

He had his window prepared ahead of time. Before the storm, before the rain Noah built the ark and ...he built a window, and when the rain stopped the window of opportunity was there.

But it would not have been there if Noah had not built it. He created his own window of opportunity.

Despite the storm, in a way he was still the master of his own destiny.

Perhaps someone else would not have prepared ahead. The rain would stop, the sun would shine but this other person would never see it. He would miss the opportunity because he was not prepared for it and then he would spend the rest of his life complaining that he never gets a break.

Opportunities are always here but most of us simply fail to notice them.

I know people who have their eyes and ears open all the time, just waiting to catch the next investment opportunity, the next wave. They are successful in life.

I also know so many who are bitter that "others get all the breaks".

Noah was in storm, one of the worst in history, but he was prepared that as soon as the sun began to shine he would be ready to open the window, the very window that he himself had built. 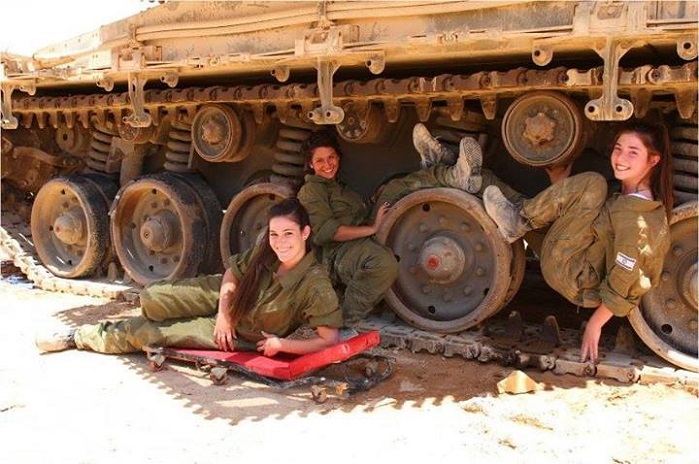 These girls serving in the Israel Defense Forces have found an opportunity for shade and rest. Always keep your eyes open, opportunities are everywhere.

Join Us in Israel
Tour and Train Israel Experience

Seize the moment, come to Israel and train with us in Krav Maga. The fastest way to improve your skills and gain true understanding.