Recently two Israeli soldiers were taken captive. The Israeli forces responded with overwhelming military force. This is not the first incidence of this kind. Around 4,000 years ago there was a similar occurrence.

“and they took Lot, Abram’s brother’s son, who dwelt in Sodom...And a refugee came and told Abram the Hebrew.” (Genesis 14)

The story of Israeli self defense begins with the first Hebrew, the patriarch Abraham. His nephew Lot was taken captive by four victorious kings. Abraham had an army of 318 men, well trained in the art of war. He armed them with swords and spears and they pursued the enemy. “and he divided his forces in an attack against them at night, in order to throw them into confusion, ..and he defeated them.” 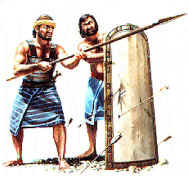 Abraham’s son, Isaac led a peaceful life, as did his grandson, Jacob. However even a man of peace must sometimes fight. “And Jacob was left alone; and there wrestled a man with him until the break of day. And when the man saw that he did not prevail against Jacob, he touched the hollow of Jacob’s thigh and it was put out of joint, as he wrestled with him.” (Genesis 32) One thousand years ago the Biblical commentator explained “As it is the way of two opponents who make an effort to knock each other down, that they grab each other with their arms, shake each other, moving their legs about and try to wrestle the other down.” (Rabbi Shimon Yitzchaki, 11th Century, France)

Sounds like our Judo of today. The Biblical narrative tells us that Jacob’s wrestling opponent was none other than an angel of God. After the match the angel blesses Jacob and tells him he now will have a new name; Yisrael (Israel). The Hebrew word Yisrael is composed of two words - Yisra (to struggle) and El (God). “For you have struggled with God and man and have prevailed.” Thus the name Israel is born of this early wrestling match close to 4,000 years ago. In a sense the nation of Israel and the earliest Israeli self defense were born together. The struggle with “God and man” has continued to this very day.

Read about the connection between the warrior and the Bible in today's army.

The Warrior and the Bible