When one thinks of a martial arts teacher, do the words 'kind', 'gentle', 'fatherly' come to mind?

With Bill D'Urso, all those words and more popped into my head. An impressive speaker with a vast amount of knowledge accumulated over many years of training in the martial arts and serving in the military, Mr. D'Urso is the picture of kindness and humility. 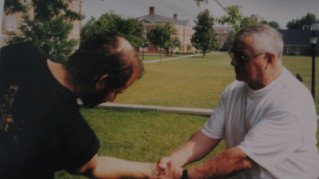 With a calm fatherly voice he discussed his art of jujitsu, street smarts, and how to survive on the mean streets. Years of intensive training distilled to the most basic and important principles and techniques provided the basis for his classes. With respect and admiration he spoke of his teachers, men like Michael DePasquale Sr., who has since passed on, and Michael DePasquale Jr., a man considerably younger than himself.

Not everyone present shared these qualities. Some of the younger students were a bit crass and over confident. One tall, muscular young fellow, wearing his brand new Taekwondo black belt, showed an unhealthy lack of respect.

Mr. D'Urso was 70 years old at the time. The young fellow, showing he had not much between the ears, said, "Yeah, nice stuff, but can you kick a man in the head?" (As if that is important anywhere but in a Taekwondo tournament).

The young man came up and tried a move on the old master. Mr. D'Urso quickly grabbed the young buck, twisted his wrist, kicked in the inner thigh, and put him squarely on the ground. At that point Mr. D'Urso gently tapped him on the head with his foot. "you see, I just kicked you in the head. You are very tall and I am rather old. Why should I have to kick you all the way up there? It is easier for me to kick you while you are on the ground."

I got the message. Hopefully the young, too proud black belt got it as well.

Mr. D'Urso did not try to impress us with fancy moves or high kicks. For a double lapel grab he suggested the following, "First thing is …thank God, because the possibilities in this situation are unlimited. The attacker is not too bright." "Strike to his nose, or the breast bone, to the diaphragm, solar plexus, take a knee out, take an ankle out. You could do an open hand strike to the side of the head."

He showed us that we already had all the tools we needed to defend ourselves, we just needed to learn how to use them. We had to become aware of what we already had in our arsenal. Personal safety did not depend upon learning an entire new language, or learning to do a double flying side kick while jumping over a building with your pants are on fire. The key was simplicity, awareness, humility and respect for the threat.

"Always appear passive in the face of an aggressor", he warned us. "Do not get caught in the center of two guys, move over towards one. Take one guy out completely, then move over to the other guy. Or, deal with one guy enough to get him out of the way a bit, take out the second guy completely, go back to the first guy."

With knife attacks he stressed concepts I would later learn in Krav Maga, "In defending against the knife, always think what will happen if, after you block the thrust, he pulls his hand back and cuts you with the blade." D'Urso stressed that Jujitsu was not a sport, it was a street combat art.

Like Mr. Miyagi in "The Karate Kid", D'Urso stressed balance. "Balance, always important, nose over naval. The easiest guy to take out is the guy out of balance."

This was at Dr. Beasley's Karate College Summer seminar, where high ranking, and low ranking, martial artists from all over came to learn and share. Most did not wear their black belts; they did not come to show off, they had nothing to prove. Personally I found the Karate College experience invaluable, and I continue to draw lessons from that experience. (Good thing I tend to take a lot of notes).