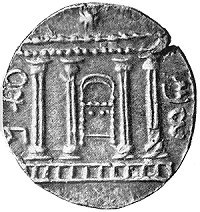 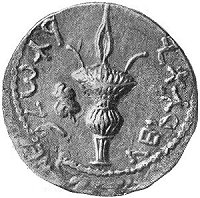 This coin was minted during the third year of the Bar Kochba revolt (132 - 135 C.E.) as a symbol of freedom and independence. It is a large silver coin known as a 'Sela'.

The top picture, one side of the coin, shows the image of the Beth HaMikdash, the Temple in Jerusalem, and reads "Redemption of Israel", while the back side of the coin (bottom) reads "Freedom of Jerusalem", i.e. these were the goals of the revolt against the Roman oppressors.

The second side of the coin shows the lulav, ethrog, hadas and arava; the four species brought at the Temple in Jerusalem during the festival of Sukkot. This was according to the opinion of Rabbi Akiva that one of each species was brought.

Rabbi Akiva was a great supporter of General Bar Kochba and believed him to be the Massiah of Israel. 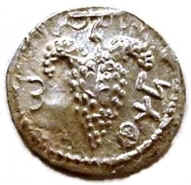 Dinar coin, assumed to be from the third year of the revolt, 134- 135 C.E. Picture is of a bunch of grapes and the writing says,"Shimon" referring to General Bar Kochba's first name. 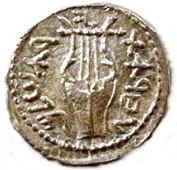 This side shows a three string lyre and reads "For the freedom of Jerusalem." 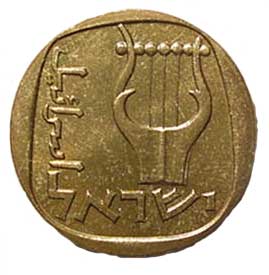 This modern coin, 1970's, is modeled after the ancient coin 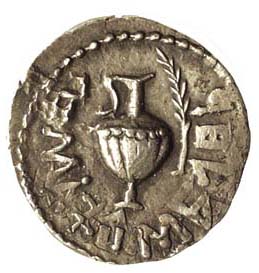 Jug with handle; palm branch to right.; the inscription in ancient Hebrew reads; "Eleazar the Priest." This coin is either a zuz or a dinar. 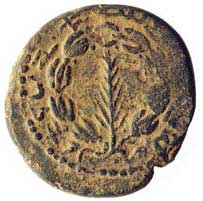 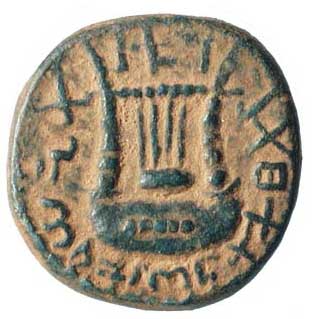 Lyre and Hebrew inscription, "Year one of the redemption of Israel."