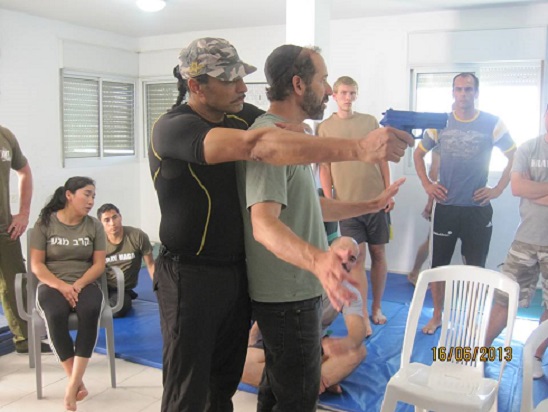 Moshe teaching how to handle a hostage situation involving a gun at Tour and Train June 2013. This could happen to anyone, anywhere. Be prepared.

During one of the recent Tour and Train sessions there was a young man from Switzerland who complained that we spent too much time on gun defenses.

Now there is a logic to the way I teach where learning empty hand techniques, gun defense, knife defense, stick defense, eventually all come together and complement each other.

But even without that aspect of the synergy of techniques there is the troubling issue of what I was told. "We do not have guns in my country so I feel that for me it is a waste of time to learn these techniques".

But no, that is too obvious.

This is not the first time I am hearing this. Years ago when I was teaching on American university and high school campuses I was told that "although gun disarms are 'fun' there is really no need for them as guns are not allowed on campus."

Well that was before Virginia Tech, Columbine, Oklahoma, Northern Illinois University, Newtown, Connecticut, etc etc. And now of course no one would say that.

The problem is we are always preparing for yesterday's attack and not looking to tomorrow.

I was training a security guard from Holland. He told me that they were not allowed to carry guns, or knives, or even a club. And they did not train them in any form of self-defense or Krav Maga. So what did they have to scare off attackers? a uniform.

I understand this is the case in many European countries, that guns and various weapons are illegal, but my question is are the criminals aware of this? Are they too abiding by the law? Now we know that when there is a will there is a way and if a criminal wants a gun he will find one.

Just yesterday I read about a killing in Britain. A 15 year old student, upset over a recent suspension, walked up to his teacher who had her back to the class, and stabbed her in the back.

They screamed and cried. A few ran to another classroom to call for other teachers, who promptly subdued the boy. But it was too late for the teacher. She was killed.

In the investigation that followed it was mentioned in that past year over 1,000 weapons have been brought into British schools including many guns.

And it makes me wonder

The article claimed that now resources would be devoted to treating the traumatized students. No mention was made of self defense training.

There was no mention of why an entire class of 15 year old students could not even attempt to subdue one 15 year old who had his back to them while he was stabbing the teacher.

Many questions but no answers.

A few years back a British couple came for training. They too asked me not to waste their time with hand gun training "as there are no handguns in Britain".

And it makes me wonder..