Ground knife defense is a neglected area of training. In fact in all the countless martial arts academies I have been to I have hardly seen anyone deal with this.

I have seen some amazing Brazilian jujitsu and submission wrestling but these are usually taught as sports without taking street situations into account.

When I am on the ground there are many things I need to be aware of:

There might be dangerous litter, such as broken glass or stones, on the pavement (rather than the comfortable mats of the gym)

The assailant might have a knife hidden somewhere on his body.

I want to address this last point; a hidden knife

Being aware that the assailant might have a hidden knife changes my whole strategy, I must constantly be on guard against that potential knife attack; Where might he be hiding it? Any hand movement could be his attempt to reach towards that knife.

I must always be scanning the environment. 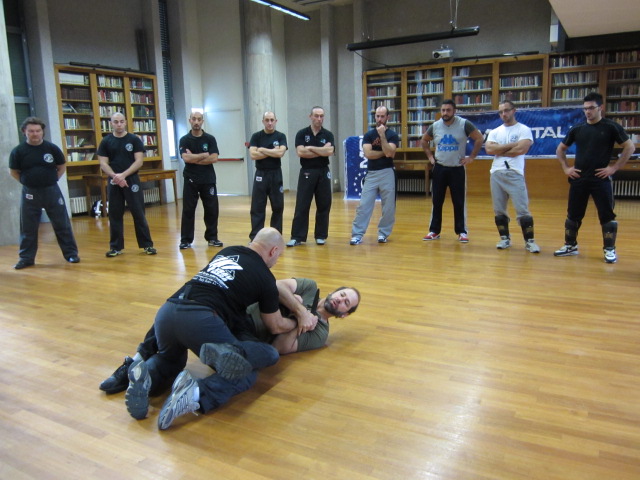 At IKI we teach techniques to prepare for such an eventually, to look for it and to know how to respond to it. Should he try to reach for the knife it will prove difficult for him to get to it.

One thing we do is squeeze his body hard with our legs, thus he will find it difficult to get his knife. Also, while he is attempting to get to the knife, you can attack him in the face, gouge his eyes, etc.

Of course we do not attempt a disarm, we only buy time until we can get up and get away.