The modern state of Israel was born in a struggle. This struggle consisted of wars; wars against the British occupiers, wars against local Arabs who tried to stamp out the Jewish state in the making, and wars against numerous Arab states that sought to destroy Israel as it declared independence.

Israel's struggle was not limited to wars. The young state had to struggle with accommodating over a million Jewish refugees escaping persecution, coming to Israel penniless, without appropriate skills, and without a command of modern spoken Hebrew.

These refugees came from the Arab lands where they had suffered from many generations and from Europe where the Shoah, the Tragedy, the Holocaust had just taken place and post-Holocaust persecutions were still taking place.

A third of the world's Jewish population had just been murdered. Refugees arriving without military training, had to be forged into a fighting force, people from vastly different lands and cultures, speaking a hundred different languages, had to become a single nation once again, after having been separated for thousands of years.

Settling the refugees, feeding the hungry, learning the language, and fighting off the enemies; all had to be done at once.

And yet – it succeeded!

Israel was born, they made the dessert bloom, they fought off the enemies, and they created one of the greatest fighting forces.

The secret? Faith, hard work, and improvisation. Israelis learn how to adapt, how to think on their feet and improvise, how to get by despite all odds, and how to survive. This is how Krav Maga works as well. There are no kata's, poomse's or pre arranged forms. It is simple, direct, practical, and constantly evolving, just like the people of Israel itself. Whether it is high tech or Krav Maga, we learn to make things work, simply and effectively. This is the spirit of Israel. 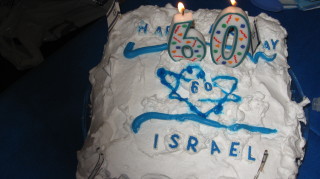 For more information...Tour and Train.

EBook, Israel: A Nation of Warriors
by Moshe Katz

How did Israel become a nation?
Learn about the Miracle of Israel.