Is Krav Maga only physical?

Can it be mastered by just imitating the moves?

Does it have no soul?

Is only about hitting people?

I was 13 years old when I entered the school, an outsider, a foreigner, different mentality and culture. Although I could speak English I had difficulty reading and writing English on the expected academic level. I could not relate to the other students with superficial talk about dating, parties and sporting events.

With the Biblical and Talmud classes I felt more at home, more in my familiar element. Rabbi Wehl of blessed memory was not easy going. A great man, a devoted educator, but sometimes his great passion upset some students and parents. He was so devoted to his cause that sometimes his passion came across as intolerance.

Politically correct he was not.

He delivered his message with passion, as I deliver mine today. And like me he wondered, "Is anyone really listening?" "Is anyone getting this?"

No matter, he continued with his message. Listen or not but the message must be spoken.

I picked up other bits of wisdom here and there. As the Talmud says, "Even the causal talk of the scholars requires study." (Avoda Zara, 19)

"Rabbi Yosei the son of Yoezer said...cover yourself wit the dust of the feet of the scholars and drink in their words with great thirst." (Ethics of the Fathers)

I noticed the respect with which he spoke of his mother. I noticed how though he was certainly a grown man he would call his mother on the office phone if he were planning to meet her and was running late, he did not want her to worry. That is a habit that I have picked up and incorporated into my life to this very day.

Years passed, I was renting a small place in the Ultra Orthodox neighborhood of Boro Park, Brooklyn. By chance I knew someone who knew his wife, of blessed memory, a righteous woman. I overhead someone say, "So, Mrs Wehl..." and I made the connection.

As is our tradition people who are alone are invited over to families for the Sabbath dinner. It was my great honor and privilege to be invited to the home of my former teacher, although there really is no such thing as a "former" teacher. The way we see it either someone is your teacher or he is not. And if he is your teacher you owe him/her honor and respect for your entire life.

A special place of honor is reserved for teachers. And the lessons they teach us guide us throughout our lives. There are no "former teachers".

"If one has taught you one letter, one concept, you are obligated to honor him as your teacher." (Our rabbis of blessed memory).

In our tradition a teacher is on par with a parent.

Quietly I sat at the Sabbath dinner, on the right of my teacher, the esteemed but controversial rabbi. What an honor just to sit next to him, not in the classroom but in his home. We are taught to be like Abraham our father, to bring in guests and make them feel at home. Abraham, though in pain, invited in his guests and prepared for them a lavish meal. He offered them water to wash their feet and took care of all their needs. We learn from Abraham how to be a good host, to understand the needs of our guests, to promise little but to do a great deal.

Finally I spoke up. I began to repeat some of the wonderful messages that I had heard from my teacher over 15 years earlier, when I was hardly mature enough to understand his message.

This upset many people, but it was the truth. He was no holds barred. Talmudic NHB.

He was old school and did not change with the time. If you were late to class after recess, you stayed outside. Our large rabbi placed his chair against the door, blocking the door with his back, facing the class. I can still recall the frantic look of late students, looking in from the window, trying to get his attention but he paid no attention, he was teaching and would not be moved. The message was clear; show up on time for my class, give me and the Law the respect we deserve, or stay outside the entire lesson. (and humbly explain to the principal why are you stuck in the hallway).

You gotta' love him.

So that Friday night, Sabbath dinner, I retold some of the messages, some of the lessons, some of the values that he preached. And then something beautiful happened, something I cherish and shall never forget.

His dear wife, may God rest her soul, leaned over and whispered in his ear, "You see Yankel (Jacob), somebody was listening."

A teacher can be rich in wisdom, and in disciples, but rarely financially. But for a true teacher that is reward enough. I have been privileged to be a teacher and like my teachers before me I often wonder, is anyone truly listening?

Now and then I receive the feedback from true students, who have taken the message, internalized it, made it a part of their lives. Very few will take the time to express it but it does happen, every so often, it is that voice of someone leaning over and whispering...."Someone is listening."

Nearly every week I hear from one of members about how they used an IKI technique to successfully defend themselves; against sticks, knives, guns, empty hands, ground situations. But sometimes I am privileged to hear more, to hear about how the message has become internalized.

First I want to thank you for teaching me IKI ... not only Krav Maga ...

I mean IKI contains also the inner side .. not only the fight ...also the mind.

Tonight one of my patients threatened me and my staff at the hospital. He was drunk with Vodka. When he came to the hospital he had four policemen at his side ... because he was very aggressive at home.

Hours later – while the police were long gone – he became again very aggressive.

The nurse which was in his room became afraid ... so I went in the room and talked to him ... deescalation, to protect the nurse. But it does not work so he lifted his fist and walked up to the nurse ...

Now there was no way out, I must react like learned at IKI Krav Maga “VIP-Protection” ...

When the nurse was safe I found myself in a 'clinch position'... there was no punch, no kick.. I pressed him against the wall and fixed him, so he was not able to fight.

Why do I write this... it is because IKI Krav Maga is much more than only fighting.

Every second during this situation I was “Master of the Situation” ... I felt absolutely calm because I watched his body language, saw his movements and was always able to act and react.

I knew in every moment – if necessary I am able to fight and “blow him out”.

Self-confidence is what follows the IKI drills. ... one part of the inner side of IKI.

Thank you so much

Wish you all the best 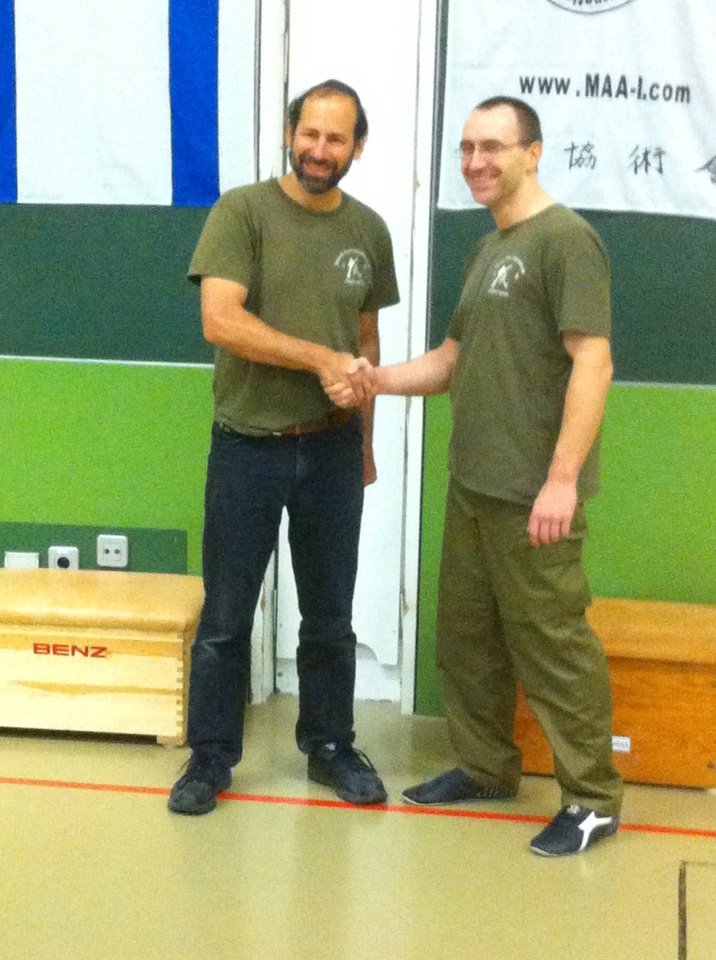 While being fit might give you a different strength and maybe some "confidence" and probably will keep you healthier, it is also possible give you a false confidence.  I just found that your Krav Maga style is for anybody who want to be safe. The main problem that most  people experience is great FEAR that can freeze them. As soon as their mind is strong and accept not to be a victim, the fear will turn into power.

Recently I instructed high school students in IKI (mind set) and basic defensive techniques, and I tested all students for their willingness to survive (using my BulletMan suite). Attacking them aggressively, (to trigger some fear) I was surprised by the outcome.

To see some "fit confident boys" less reactive when I jump to choke them.  But others (fatty boys) who were "scared" reacted with some fear, but using a strong voice while trying to disengage they managed to escape faster.

So, being fit is good, but not necessary is getting you out of trouble.

I also realize that the power of the mind (such as believing: I am not a victim) and the guts to react fast to an aggression and run for safety, will keep people safe.

Your techniques are easy to learn by everybody. And being humble and not showing an  "attitude" might also avoid a conflict before it starts. 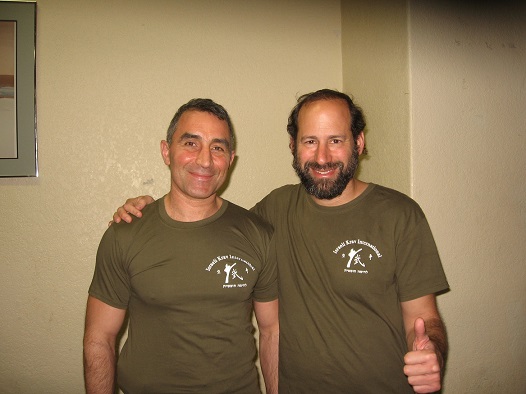 Last week on Wednesday night at 120am my girlfriend woke me up and told me someone was knocking on the door. My Dog went crazy he stays inside he was barking growling etc-(Leo is my Krav Dog)

I went to the back door and there was a young man standing there. I didn't open the door even though he indicated he was cold (his mother lives across from us) He said he was out of gas and wanted to borrow some - Our lawn mower had been stolen so I told him we had no gas and that it was late- My gut feeling told me something was wrong and he was up to no good-

Well trusting my gut feeling was the right thing to do- He is currently in jail after a shoot out with police during a home invasion armed robbery.

I knew I would be exposing myself and girlfriend to danger because he had a team outside that rush the door when you open it. I hope justice is served in this case.

IKI Krav Maga -awareness as well as the means to defend.

Thank you for all you do! 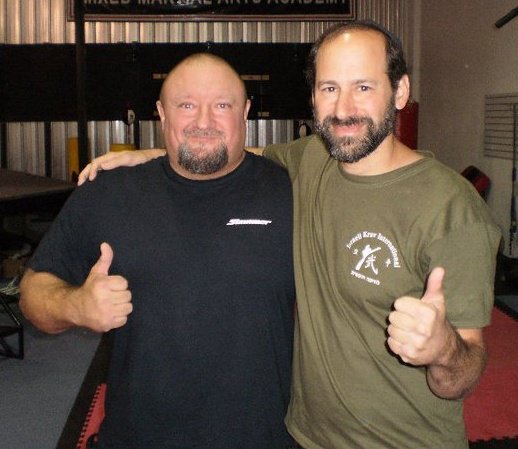 I have recently joined the Old Dominion Search and Rescue team and Bassett Rescue Squad- My very first call was with the Captain who is in his 80s but a very sharp man and his assistant Elaine she is in her 60s also-When I climbed in the front I asked Elaine what was the call about and she said a Mental patient was having a break down.

So far it was just another call and a chance to help a person in need. Once we arrived on the scene I had a weird feeling hit me in the stomach..you know that gut feeling that something isn't right.

As we went in Claude the Captain was taking the guys blood pressure and Elaine was talking with the mans wife-I noticed the mans preacher was there so I knew this mental breakdown must have been pretty severe.

More and more people were arriving on the scene and I positioned myself near Claude and was talking calmly to the patient when a loud noise in another room set the Patient off.

He looked terrified and and starting screaming "Who is in my house!"

Then he pulled a gun and as soon as he did-without thinking I disarmed him and controlled him without causing him injury-The patient refused to be transported so I made Claude and Elaine leave first then I left.

The Sheriffs dept will put a red flag on the address and any time in the future EMS is called we will have a Deputy there.

Just wanted to say IKI Krav Maga and the principles of collateral damage are embedded in my training and it not only saved me but many others -Both of the elders I was with said they felt as if God had placed me there at that moment to protect them-I was quite moved by that statement. Just want to say thank you for all you do.