No Fear or Know Fear
By Moshe Katz

"No Fear" and "Know Fear" are popular sayings and logos these days and appear on martial arts merchandise, T shirts and school advertisements. Each has a certain philosophy behind it.

No Fear, the older of the two concepts, is the old idea of overcoming and abolishing fear. "You have nothing to fear but fear itself." The idea being that fear is in your mind, there is really nothing to be afraid of. Fear is generated in the mind; there it begins and there it must end. If you can control your mind – you will control the fear mechanism. You can approach a situation without fear.

Now it is true that many fears have no basis in logic, and are in fact caused by our own mind. However, there are fears that are based on logic and thus emerges the idea of "Know Fear". The idea here is simply that you must, in a sense, embrace the fear. As the Chinese classic Tao Te Ching says, you embrace an illness, you welcome it. You must come to terms with the fact that there is something to be afraid of but if we get to know it a bit then we can deal with it better. 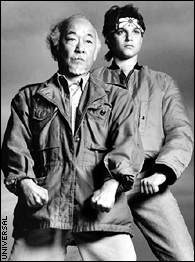 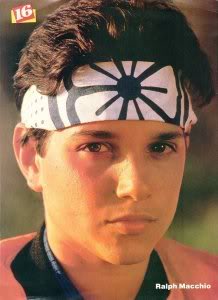 Mr. Miyagi teaches Daniel to know fear, and cope with it.

When one respects the fire it means he acknowledges that a small fire is nothing to take lightly for it can quickly explode into a large consuming fire; a very deadly fire. Respect means I acknowledge its ability to cause me harm.

Likewise in martial arts we learn to respect every opponent. For if we do not respect an opponent, i.e. do not fear him, we can be caught by surprise. If he is facing us in the ring or in the street he must have something up his sleeve, he must have some skill or weapon. Not fearing him, not respecting him, is a mistake only an arrogant fool would make. As Bruce Lee pointed out, it is a mistake to anticipate the outcome of any engagement.

Remember the classic scene in "Monty Python – Search for the Holy Grail"? The brave knights see a rabbit "guarding" the cave which they must enter. A local man tells them to fear the rabbit. But the men say, "That little bunny rabbit? You must be kidding!" They do not respect the threat and the little bunny rabbit jumps at their throats with his sharp pointy teeth, and kills one man after another.

In the film, "The Karate Kid Daniel San asks Mr. Miyagi how does one know when to fight and when not to. Miyagi answers, "When have full respect for self, full respect for other; that answer come."

Preparation is an excellent way to deal with fear. You understand the fear, you know the fear, it does not go away entirely, but knowing what you have to deal with makes it much more digestible. In Krav Maga we acknowledge the fear and the danger and we learn to deal with it. Israeli soldiers are known for the policy of "engaging the enemy". Our enemy is fear, we engage our fear; we face it head on.

I personally believe that No Fear can lead to carelessness and mistakes, while "Know Fear is a healthy approach that can lead to a significant reduction in fear. We must always be prepared, there can always be surprises. Never be caught off guard.