It has been a long day, mostly good, some...not so great. Not so easy running an international organization. With students all over the world there is usually a challenge someplace or another. No matter what one says or does there may be someone who's feathers are ruffled, someone who is going to get up with a huff and a puff and walk away in righteous indignation. Later on they will realize that ..perhaps they did not think this through so clearly, perhaps they overreacted, but..it will be too late. Pride will prevent them from coming back.

It could be a word in my blogs, a comment on our Krav Maga On Line program, a technique that someone finds "insults" their previous training, something...that sends someone off in a tizzy.

Sometimes I feel like an international baby sitter. Whenever you are in a position of leadership, this is going to happen.

My dear father was a rabbi and he always joked that he was warned, "being a rabbi is no job for a nice Jewish boy". A smart Jewish guy should find a better job than that. Being a rabbi, no matter what you do someone will find cause to be offended. No matter what my father said in his sermon someone felt that he was being singled out for shame. My father of course never had anyone particular in mind, but if the shoes fits, well...kick yourself with it.

I am fortunate to have many wonderful members in IKI, wonderful students and instructors, and those who are not so wonderful, well...they leave, sooner or later, for one reason or another. As painful as it is to see someone go, I know it is always for the best. It is not so much losing a member as losing a headache, or a time bomb. Some people are walking time bombs.

In the end we end up with the best.

And I am fortunate that goodness attracts goodness, as my late aunts Sylvia and Esther used to say, "If you have a good friend it means that you are a good friend". Loyalty breeds loyalty, trust breeds trust.

And so I feel with my "A" Team, the guys at the T shirt factory, my home away from home, the place where today Yisrael paid me the honor of calling me a "Ben Bayit", literally a "Son of the house", a term of trust and endearment to one who is regarded as family. For me it is like a black belt. It is a black belt in life.

I will not delve into our business relationship but I will say it is "old school", based on trust, a handshake, a word, nothing more. We enjoy the kind of trust that is rare in this world, rarely seen these days. In our many years together there has never been anything but total trust and appreciation.

At the helm are Moshe and Yisrael, but today I wish to focus on Yisrael, Israel, Poznantek, a special man. 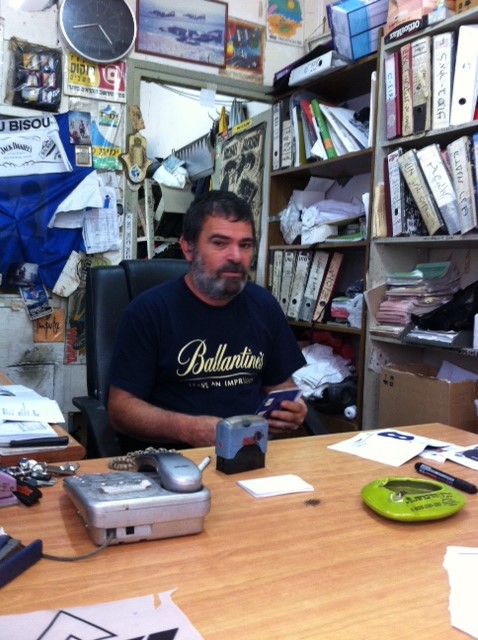 Yisrael Poznantek, a very special man. His office is simple and functional, all are welcome here, there is no door, the coffee machine is for the management, the guests and the staff, delivery people, local cops and whoever happens to come by.

Yisrael normally does not grow a beard, but here he has grown a full beard as part of the mourning process for his father.

Yisrael embodies honesty and integrity. His word is a word of honor. He will give you the best quality T shirts at a fair price. If he is not on the phone or talking with a client then he is folding T shirts and working the machines along with his employees. With managers like this there is no need for unions, lawyers or even laws. You can simply trust him.

Recently his father passed away, I saw the traditional mourning notice. 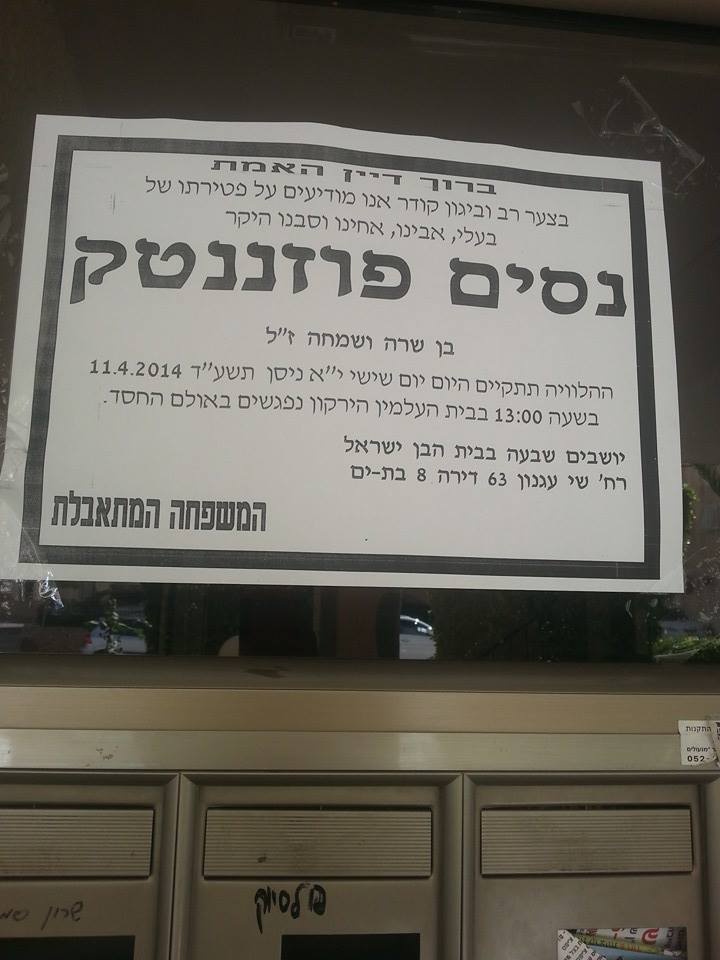 The death announcement of Nisim Poznantek, father of Yisrael and grandfather of Mika, who also works at the factory.

This gave us a chance to talk about his father, and I learned about an amazing family history.

The great grandfather came from Łódź in Poland. It was an ultra Orthodox family with many great rabbis. Yisrael's great grandfather, interesting enough, owned a textile factory in Lodz. So Yisrael is truly keeping the family tradition. This factory of course was confiscated during the war and the family was never reimbursed, but with his typical acceptance of life Yisrael dismisses that with a wave, we were born to work hard.

Yisrael's grandfather believed in equality for all people so he left Poland to fight in the Spanish Civil war. Little did he know that his act of selflessness would actually be the cause of his survival. He stayed in Spain while the rest of the family was murdered by the Nazis and their allies. The family was liquidated.

The grandfather met his wife in Spain. They moved to Israel to help fight for the rebirth of the Jewish state. Yisrael's father, Nissim of blessed memory, arrived in Israel at the age of 16 and joined the underground militia of the "Irgun", led by the legendary leader and future prime minister of Israel, Menachem Begin.

With the establishment of Israel a year later, the 17 year old Nissim joined the Israel Defense Force and was in the first class of Israel's paratroopers unit. He fought in every war until his retirement. His life was devoted to the people of Israel.He lived a modest life until his sudden passing a few weeks ago. He is deeply mourned.

His son and grandson carry on these values; loyalty, honesty, service, hard work. It is more than an honor to work with them, it is a privilege and a pleasure.

I am proud that Yisrael and his team make our IKI Krav Maga T shirts. 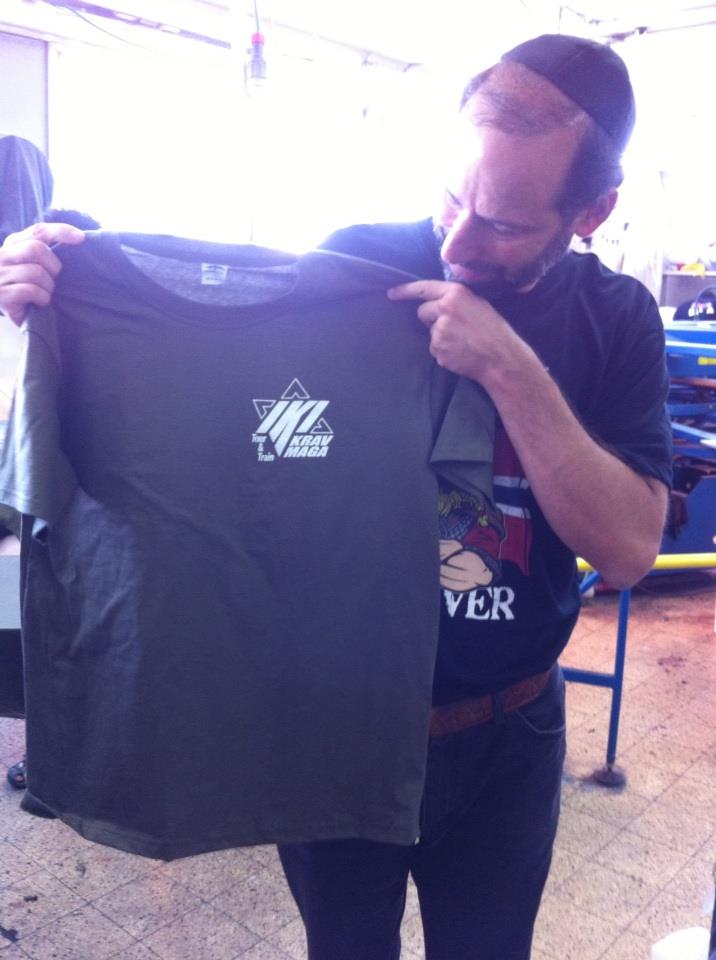 I am proud to be involved in a trusting and honest business relationship that has truly become a friendship. We now go back ...well, I have lost count of the years...

Loyalty, honesty, integrity, quality, this is what it is all about.

I know that T shirts of this quality sell for a great deal more all over the world but we, myself and the guys at the factory, keep our profits to a fair minimum. We believe in value and quality.

Yisrael said something very wise to me. You can buy your T shirts someplace else for less money but eventually people who notice the difference in quality. Eventually they will realize that you are using them, making too great a profit off them, taking advantage of you and they will go elsewhere. It is the same with Krav Maga, he told me, you want to offer only the best. If you offer sub quality T shirts people will understand what kind of a person you are and they will draw the conclusion that just as your T shirts are sub quality so is your Krav Maga. You cannot have one without the other.

We aim to be the best in every area. To give you only the top of the line, in T shirts and in Krav Maga. We will not offer you cheap imitations, only the original, and only the best.

When I go to our T shirt factory I come back not only with great T shirts of which I am very proud, T shirts that will be worn by our students and instructors with Pride all over the world, but I also come back with inspiration; inspiration to offer you the best: the best quality Krav Maga, the best service at the best price.

To be the best obligates us to work harder.

Visit our Krav Shop and see our T shirts