Years ago there was a movie "The Parent Trap", but these days a thought popped into my head, "The Teacher Trap". More specifically, "The Martial Arts Teacher Trap."

I shall explain. In recent years I have come to the sudden realization that we, as martial arts instructors, tend to have an inflated opinion of ourselves and our abilities.

Through our dojo/martial arts studio experience we tend to believe we can do all sorts of fancy knife disarms, throw opponents around like rag dolls and be Arnold Schwarzenegger, Jean Claude Van Damme, and Bruce Lee all rolled into one.

This is simply not true. We have been fooling ourselves. We have fallen into a trap of our own illusions.

Being the highest ranked belt in the dojo tends to give us a feeling of power; we think our dojo abilities are realistic.

In the studio, in the dojo, we not only have a very comfortable environment that does not at all approximate the reality of the street but we have an atmosphere that promotes the development of bad techniques.

All martial arts originally developed as a means of self defense. On the street, in the forests, in the villages, wherever men defended themselves one thing is for sure: they used simple techniques. They used gross motor moves.

But what happens in the ivory tower of the dojo, the comfy studio in the Mall? We "refine" the technique, we make it picture perfect, and like all refined foods – we ruin it; we take out the most healthy ingredients.

In the studio a teacher may very easily fall into a trap. How so? This is so common that now that I have discovered this secret I see this among nearly all martial arts teachers, including Krav Maga instructors.

As a teacher of course we know what the attack will be, after all we call forth a student volunteer and say, "Attack me with an over-hand knife strike with your right arm." Now that sort of takes away the element of surprise, just a bit, does it not?

Even Bruce Lee speaks of "attacking his set-up" or " Attacking his attack", this is great if and when you can see his attack coming. In Krav Maga we are usually dealing with a sudden stealth knife attack. Surveillance tapes show that it is very rare to anticipate an attack; in a good case you see that attack a split second before the knife is about to enter you.

Thus when I train, even though of course I know that attack is coming, I mentally try to relax myself and not anticipate anything. Let me honest, in some of my video clips I see that my stomach almost looks too big (for my size) but I realize that is because I am trying to totally relax my body. Often I am distracting myself by thinking of something unrelated to Krav Maga. And then, the student comes in with the attack. I do this to make it as natural as possible.  One of the points I stress with my students is – "Do not anticipate the attack too much. You grabbed him too soon, it was obvious you saw this coming, you must relax and just flow with the technique."

I recently saw a video of a well-respected Krav Maga instructor. He was teaching a technique where you dive in to preempt a knife attack to the stomach. To me this looked very dangerous; you are diving forward towards a knife! What if you misjudge or have bad timing or the guy redirects his attack?

How do such bad habits develop?

They develop as part of the "Teacher Trap", the teacher knows what is coming and without realizing it he anticipates the attack – creating a very unrealistic technique.

Be a student; surprise yourself, allow yourself to "look bad" from time to time. This is reality.

Join IKI on line, train in realistic Krav Maga, do not fall into a trap. 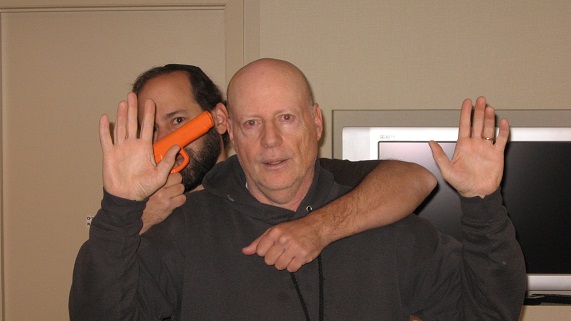 Moshe Katz being a student, training with one of his teachers, Prof. Arthur Cohen.