There's a standing joke among recruits training in the IDF (Israel Defense Forces), "So what did you do today in Krav Maga?" and the answer. "More push ups".

Drills to toughen the soldiers and train them to be more aggressive, are an integral part of military training. To understand Krav Maga you have to look beyond the technique; it is not only the technique that defines Krav Maga but also the training. 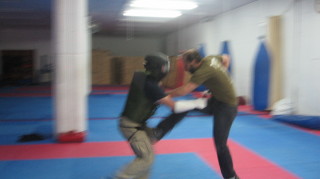 But Krav Maga is different.

There is an understanding here that without the combination of these three elements; Discipline, Technique, and Aggressiveness; your ability to fight and survive are compromised. We deal with the real world. We know that to use some of those fancy techniques you see in the movies would be very nice; a woman is attacked, she grabs the guy's hand and flips him over her shoulder. Even in the TV show NCIS they have female agents, including an "Israeli" (she is really not at all Israeli), subduing larger stronger males. It makes for great TV but it is not at realistic. No Israeli Krav Maga woman would be trained this way.

We train in Discipline because discipline means self-control, which is what you need in a real life encounter. You don't want to lose control and go crazy. You need to be in control of yourself at all times.

Some styles use a triangle to represent: Mind, Body, Spirit. That's very nice but how does that translate to defending against the thug on the street! Our triangle would be Discipline, Technique, and Aggressiveness.

It can be frustrating. You come to class and you want to learn something new and interesting. Instead you do some knee kicks, and then you do a ton of pushups. Then you do some basic kicks, and then you do a ton of sit ups and some more pushups. Next you will face an opponent and do some very crude wrestling. You might think you have learned nothing new but the questions is: do you need to learn something new? Itay Gil always tells me, "If you can't use what you know then why bother learning something new?"