Kicking is very much a part of our style of Krav Maga. Although Krav Maga is known for its gun, knife and stick defenses, kicking is also a major part of our training and is used throughout our program.

The idea of course, as with all aspects of Krav Maga, is to deliver surprising and powerful blows that will end the encounter as soon as possible. We are not interested in long kickboxing bouts. We have many drills that combine kicks with hand strikes, pressure points and takedowns. All these aspects have to work together on the street.

As such, we spend considerable time on the basics kicks, the Low Kick (roundhouse, mawashi geri) in particular. We deliver this kick from many different angles to many different targets. The aim is always to have the first kick powerful, and debilitating to the opponent.

To make the kick as effective as possible, for people of all sizes, I stress certain points.

Hip Rotation  - Proper hip rotation is essential for powerful kicking. I always stress, "You must kick with your hips, not with your legs." Yes, we use our legs in kicking but the power is not from the legs. It is from the rotation of our hips. This takes practice but the results are amazing.

Illusion of Being Too Far Away - Some people have trouble judging distance and the distance their kicks can reach. They have the illusion of being too far away and they try to compensate for this by taking a big step forward as they kick. The result is they are not using their hips and they are 'jamming' their kicks, making them weaker and less effective.

If instead of stepping forward you just allow your hips to do the work, the rotation of the hips will bring you closer to your target; there is no need for that artificial step.

Wide Stance - Another very common problem I encounter is the stance. Most people have a very narrow stance. When I kick I use a natural body stance, just slightly wider than how I would stand if talking with someone casually. For some reason when people get ready to kick they elongate their stance making it more difficult to bring the hips into play. This greatly weakens their kicks. A slightly wider and shorter scares many people as they do not feel confident that they can generate good power from such a position. But the truth is you don't need a long stance. With good hip rotation a short stance generates enough power to cause serious damage. 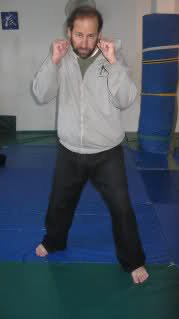 Up and Down Motion - Another common problem I see is that people kick upwards, against a force of gravity, almost like a    soccer kick. We make an up and down motion, even with our high kicks. I used to practice this way back in Brooklyn, by putting one of those folding metal chairs in front of me, I would kick over it and down, and then bring my leg back along the same route over the chair. If I did it incorrectly my leg would meet the metal, very painful. This was a good motivator not to be lazy with my body movement. I can still recall the feeling of shin vs metal chair. 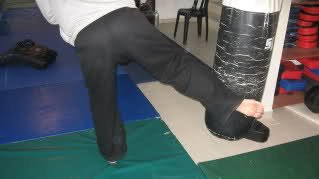 The up and down motion generates a great deal of power.

Whip like Motion - I always stress that we use a whip-like motion. Again, the power is not from the leg itself but from the powerful rotation of the body just like a whip follows the arm; first the body turns and then the whip.

Kick beyond the Target - Just as in the art of board breaking, we do not aim for the point of contact but rather for some point beyond that. Thus the power does not stop at the target, it goes through it.

Follow Through - When the kick is "over" do not stop, but continue, allow the hips to follow through completing the motion and the full rotation. This increases the power of the kick. Kick through the target, not at it.

Angles, Targets - I notice that many kickboxers aim for very few and very predictable targets. We aim for a variety of targets; High, Low, Inside, Outside, and from many different angles. This keeps the opponent guessing and makes it difficult to block the sudden kick.

The low kick can be a powerful weapon in our arsenal to end an encounter quickly, but it does take some time and practice to do it correctly.

own the DVD and learn our kickboxing system, on DVD or Vimeo. Become certified as an IKI Israeli Kickboxing instructor.