Krav Maga is a practical style, designed for one purpose only; survival in today's world. As such the weapons we train with are the weapons that we will readily find in our daily life in Israel and around the world. 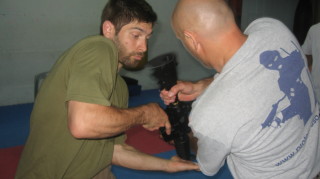 Defending against a M-16 rifle being pointed at you, at close range

I would say that the hand gun is the primary Krav Maga weapon for those without an M-16. Much training is focused on getting the hand gun out in time and shooting the attacker.

Sometimes we drill using paint ball guns. Using full gear we have a terrorist attack us with a rubber knife. We must use our paint ball gun to shoot him before we get killed.

Experience has proven that it is best to shoot. Many good officers who have tried to avoid using their firearm ended up paying very dearly. Thus, the Krav Maga philosophy is; if you can get your gun out in time - that is your First choice. Itay Gil reminded me of the scene in "Indiana Jones" where Jones is watching this very impressive display of skill with a sword. As soon as he finishes watching, he pulls out his handgun and shoots the guy from a distance. "That is the modern way to solve the problem" Itay told me, "Don't start messing around with a guy who is an expert with an edged weapon." So we train how to get out of the way and pull out our hand gun.

There is a very important point here: Respect the blade; do not underestimate the power of a bladed object, even in the hands of an amateur.  Any martial arts instructor who advocates voluntarily approaching a man with a knife is highly irresponsible. . Do not train with a lunatic.

We also train with knives and sticks; both offensively and defensively. We also train against another kind of weapon; a bomb. Students learn how to respond to an explosion and how to attack a suicide bomber, if possible. Again, this is part of our daily reality.

Occasionally we will train in nunchuks and such, but only for fun, coordination and diversity. Not many people carry those kinds of weapons these days. It is also quite rare to spot a terrorist with a Samurai sword or the Chinese Broad sword; as such we don't train in these either. Knives, guns, and bombs; that’s more our thing in the Middle East.

We learn to use and defend against improvised weapons; broken bottles, rocks, ropes, soft drink cans and anything that can be commonly found by us or our enemies. Improvisation has been one of the strong points of Israeli fighting from the very beginning.

If you are in a restaurant or on a plane; you have a fork, knife and a cup of coffee. Tossing the cup of coffee, along with its hot contents, at a terrorist, will most likely "cool him down" and give you a window of opportunity to attack him and disable him.

If you are at a meeting, you should have a pen, this can be used to poke or stab. You might also have a letter opener or a paper weight.

A belt, hat a coat, or a tray can be used in self defense. The key is to think creatively and be quick on your feet.

Join us in Israel for two weeks and learn not only to defend against all types of weapons but to handle them as well.

Tour and Train Israel Experience, the experience that will change your life.