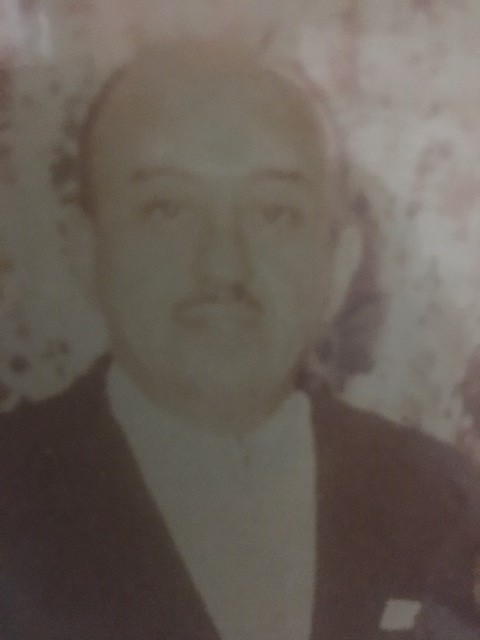 I have the great honor of being named for my grandfather, my father's father, Moe Katz of Brooklyn, NY. He passed away before I was born (at the age of 54). I never had the opportunity to meet him, but I always knew that I was named for him, and what that entailed.

My dear late father, Rabbi Paul Katz of blessed memory, carried the tradition of Judaism and Zionism that was his father's legacy. When I was only five years old my dad gave me a copy of the book he wrote, "The Bible, Myth or Reality", in it he wrote words I shall never forget, "You are named for my own father, a man who gave the entire Katz family a love for the Jewish people and the State of Israel, may you be true to his memory."

I have lived my entire life with that as my goal.

I am told that Moe was not an easy man, he was a man of principle. His lot in life was not easy, he worked very hard for the little that he had. He was devoted body and soul to the Jewish people and the dream of the State of Israel, an independent state for his people; those were his passions. He imbued my father with those same values and passions, and my father passed on those goals to his four sons. We all have stayed true to his path.

The following article is one of the few surviving mementoes I have of my grandfather whom I never met, but whose name I carry.

The last issue of 'The New Palestine' carried an advertisement and a report announcing the inauguration of a buyers' arrival column in the New York Herald Tribune. Behind this announcement there is an interesting chain of events involving Moe Katz, an outstanding and devoted member of the Flatbush Zionist District.

Moe Katz, like many thousands of Zionists, was terrifically incensed at the harm that was being done to the Zionist cause by anti-Zionist articles that had appeared at regular intervals in The New York Times.

At the beginning, he voiced his indignation by word of mouth and in letters of protest to the editor of the 'Times'. Like many of his fellow-Zionists, he was hopeful that the New York Times would eventually acknowledge the error of its ways and cease the publication of its biased anti-Zionist dispatches, particularly those from Palestine and England which he considered British-inspired. The saturation point however was reached when at a moment when the Yishuv (The Jewish community of Israel)  was fighting with its back against the wall, The Times began featuring prominently on its front page dispatches linking Zionists to Communists. These dispatches were exploited by the enemies of the Jewish people causing irreparable damage to the efforts of the Zionist leadership in securing justice for the Jewish people.

Moe Katz began to act. Spurred on by his friend, Phil Lassar, president of the Flatbush Zionist District, Moe Katz began what was tantamount to a one-man citywide campaign to boost the circulation of The New York Herald Tribune, which in contrast to The Times, treated the Palestine situation in an objective but just manner.

A prominent businessman himself, Moe Katz personally canvassed hundreds of merchants and business houses, urging them to buy The New York Herald Tribune. His efforts met with a warm response.

Hosts of his friends and neighbors began to patronize the Tribune. However, in conferring with numerous manufacturers and business establishments, Moe Katz encountered the argument: "We should like very much to subscribe to The New York Herald Tribune but we are forced to buy another paper," since The Tribune did not carry what to them is a vitally important feature, a "Buyer's Arrival" column.

Moe Katz then went to work and prevailed upon the editors of The New York Herald Tribune to institute such a feature service. Readers of The New York Herald Tribune have undoubtedly noted this feature service which lists the arrivals of buyers for the previous 24 hours, as well as a buyers' question and answer service, which is being rendered without charge to manufacturers and sales representatives.

Thus a new feature inaugurated by one of the foremost and outstanding newspapers of the world has been spurred as a result of a one-man campaign by Moe Katz.

P.S. There is only one exaggeration in this article:

A prominent businessman himself, Sadly, that he never was. He never owned a house, a car, or anything else. He lived in the rented second floor of another family. My father had to work as janitor and handyman in a summer camp so that my aunt could attend. Money was hard to come by.

P.S.S. on a political note, those who today refer to a so called Palestinian people, note the article above. The term Palestine was used to refer to the land of Israel, and the people who lived there, Jewish people, were the residents of this land. Thus a Jewish newspaper is called The New Palestine. This was not an Arab newspaper just as the term Palestinian never referred to Arabs. The idea of an age old Arab Palestinian nation is a hoax, pure and simple. Similarly the newspaper "The Jerusalem Post" (an Israeli Jewish newspaper) before 1948 was called "The Palestine Post" and then too was a Jewish newspaper. Arabs referred to themselves as....Arabs. And they hail from Arabia.

Similarly the "Palestinian Talmud" (In Hebrew the Jerusalem Talmud) was not written by Arabs but of course by rabbis, who are Jewish. The term Palestinian never referred to a specific nation and certainly not to the Arabs.

Thus there is no Israeli - Palestinian conflict. There is a Jewish - Muslim conflict. Arab refers to those who come from Arabia and over the centuries there were many Arab Jews. Arab is not a nationality nor a religion but a location.