We Jews are known for our sense of humor. It is said that during the long years of our exile from our land we developed humor as a method of survival.

We laugh at our troubles.

Two Jews are about to be executed for...being Jewish. "Any last requests?" One Jew turns to another and says, "I would like to ask for a blindfold so as not to see my death coming". "Quiet", says the other, "Don't ask for anything, it will only make matters worse".

So we turned out laughter into a business, we contributed to comedy, to music, to the arts. We developed Hollywood and then came the accusations, Jews control Hollywood, Jews control the movie industry, Jews are too prominent in the entertainment industry.

Unfair taxation during our long sojourn in Europe devastated the Jewish people. As Tevye the milkman said, "There is no shame in being poor but it is no great honor either".

We lived with the hope of redemption. We supported anything that looked like it would bring us salvation and acceptance; democracy, socialism, communism. Poverty lingered.

The rabbi says, "I have a job for you. You go to the roof of the synagogue. You look to the north and you look to the south. Can you do this? "

"You look to the east and to the west, yes? understand? and when you see the Messiah coming you come and tell me at once. Can you do this?" 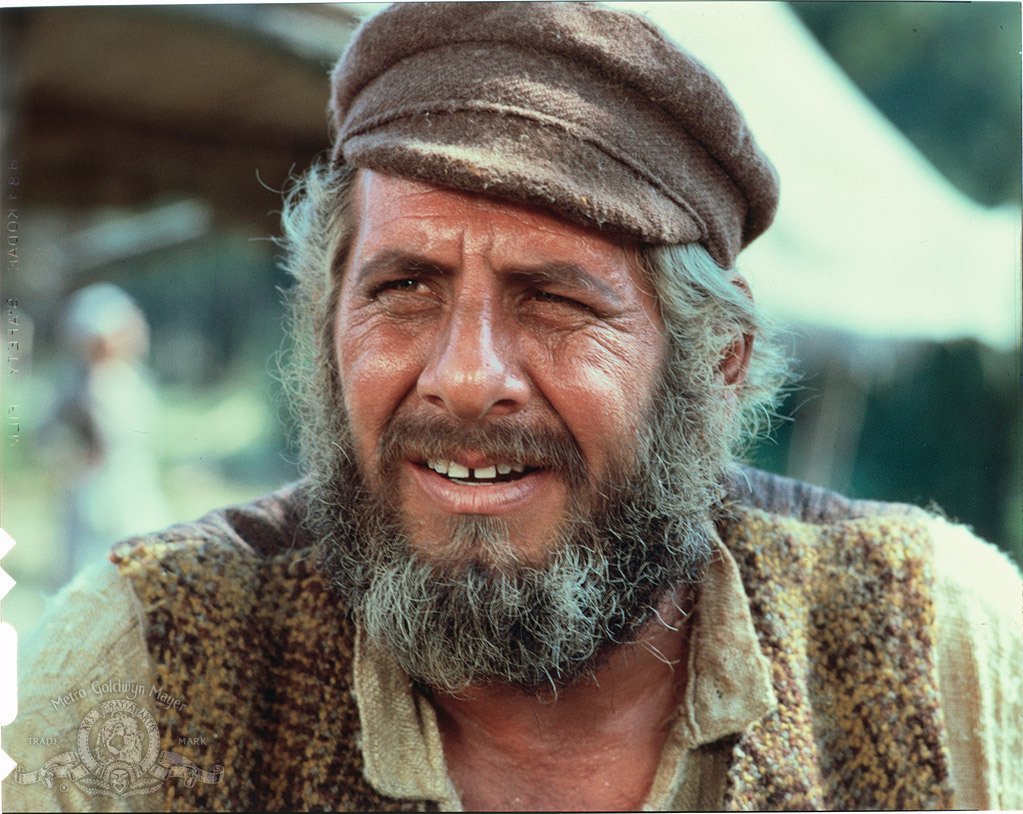 Topol in the role of Tevye the milkman, a classic tale, a classic Jew

We laugh but with a tear in our eye. We smile but with melancholy in our hearts. We sing but in a minor key. Such is the Jew.

A different kind of laughter is coming back. A pure laughter, not mixed with so much sadness.

I can hear it in the way my American relatives speak as I contrast it with the way the first returning generation of our Israeli family speaks. There is a difference and you have to be deaf not to hear it.

The other day my nephew Roee, (in Hebrew, "My Shepard" as in "God is my Shepard I shall not fear") was doing something as simple as ordering eggs in a restaurant, but there was something special in his voice. He is a commander in the Israeli army, he was born into freedom. The first generation of Jews in nearly 2,000 years to be born into freedom. FREEDOM.

"I want the eggs soft but not runny, firm but not dry and a large coffee in a glass cup served hot, after the meal". It was said in such a tone that I fully expected the waitress to stand at attention and say, "Yes Sir!"

Everything was delivered as requested.

His tone of voice, the short firm commanding sentences are a reflection of a new attitude; perhaps the sad, self-mocking humor of the past is gone. Perhaps the funny Jew is gone.

Perhaps this generation will not be as funny as before, or perhaps a new humor is developing, a healthier one, one that is not a coverup for tears.

In the year 135, after a heroic battle led by General Shimon Bar Cochba, we lost our independence. We were brought to Rome as slaves and sold in the marketplace. Since then we have been scattered, victims of every possible form of prejudice..

been driven out of every land,
He's wandered the earth an exiled man.
Seen his family scattered, his people hounded and torn, (Bob Dylan)

But now we are home, many of us at least, and as we are on our own soil once again we are returning to our roots. And with this return comes our form of fighting and our form of self-defense.

Krav Maga is Israeli, and our style, IKI Krav Maga, is firmly planted in Israeli soil with branches all over the world.