Sports and Real Self Defense
By Moshe Katz

I always stress that in order to understand any martial art or fighting system you must be familiar with its culture. That is why I wrote a book called, "Israel, a Nation of Warriors" as the written manual to accompany our training.

It seems that most martial artists are incapable of really judging what is effective and real and what is not. After many years in this field that is the sad conclusion I have reached; most instructors really have no clue as to what real life is like, they have no sense of real danger is. This is sad indeed.

I find it tragic that fancy jujitsu moves or even the sport of Judo are presented as real self defense. The UFC, MMA, wrestling, what-have-you, are sports, period. They are sports. Why can't people see this?

Forty; the number often used in the Bible, the Torah. Moshe went up to Mount Sinai for 40 days, the children of Israel walked through the desert for 40 years, "and the land rested for 40 years."

The number 40 has significance for us.

And this year is 40. This year marks forty years since the Munich Olympics, or as it is known here in Israel, "The Munich Massacre", where Arab terrorists entered the Olympic village and took the Israeli athletes hostage. The German police's top units, to their everlasting shame, could do nothing. After a fierce struggle eleven of our athletes were murdered. They came home to us in coffins. Ironically the Arabs use the term the "Holy Eleven" to refer to the eleven suicide attackers who brought America to its knees on 9/11.

I am not alone, it shaped a generation. Our athletes went to play sports and ended up fighting for their lives. They heroically fought the Arab terrorists.

On the front page of the Jerusalem Post I saw the following headline…"Shahar Ayalon: 1972 Olympics massacre changed my life forever".

He was a young athlete of 16, a promising runner, who was invited along with the Israeli delegation to experience the thrill of the Olympics. What he experienced changed his life.

"Ayalon excelled in the 400-meter dash and the 1,500-meter middle-distance event, but after Munich he left the sporting world. He joined the Israel Police's elite counter-terrorism unit in 1977".

"Since then I've been in counter-terrorism and police work for 35 years."

The trauma from the event, Ayalon told the Post, caused him to abandon his athletic career and join the Border Police's Counter-Terrorism Unit, paving the path for a life in the security forces and law enforcement. (Jerusalem Post, Tuesday, July 24, 2012)

Sports and self-defense are not the same thing and yet the American army and police hire martial athletes to train their men. Countless men, women and children sign up to learn self-defense but instead learn sports. What will it take for people to know the difference?

Train with us in Israel, learn Real Self Defense, Israeli style 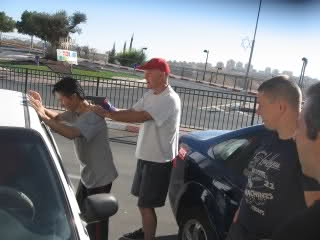 Gun to the head as you enter your car, Do you know how to handle this situation?

Come to Israel where we train like your life depends on it. Join us for two weeks of training and touring, two weeks that will change your life

Defense in and around a car,

Live in an Israeli community