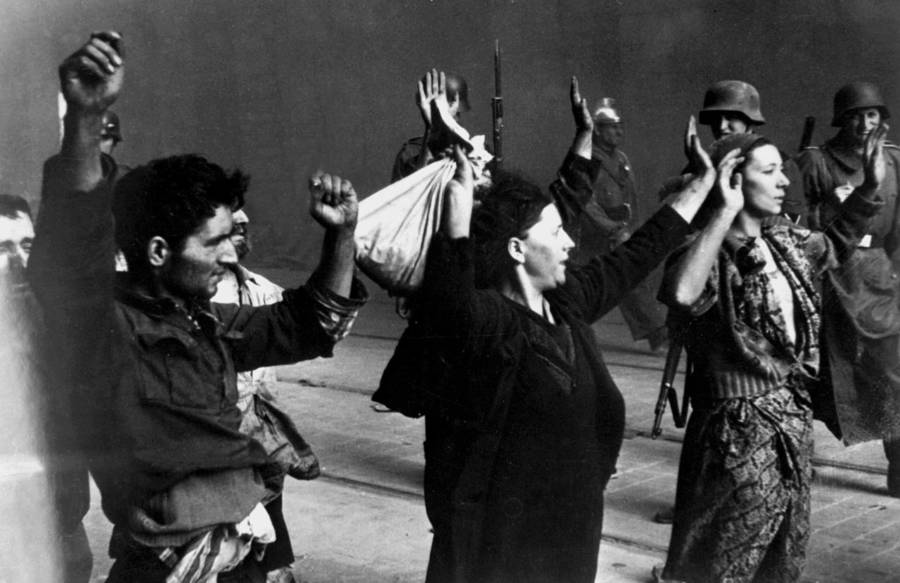 The seminar last night was successful, some new students, some veterans, the attendance was OK. As I always say people should be lined up around the corner to get in. The instructors ask, why don't more students come to our classes? Crime and violence are on the rise and yet people are slow to react, despite full knowledge of the dangers they may face.

Some studios, not IKI of course, opt for "commercial Krav Maga" which is basically a fitness work out in cool clothing with the illusion of learning to protect yourself. We are purists. we stick to real Self-Defense, Survival Training.

I am on the plane, the coffee is good and I take out a book to read, another book on the Warsaw Ghetto Revolt, one of the most powerful events of my life, even though it took place before I was born.

People often ask why did the Jews not fight back during the Holocaust? The question is not only unfair and judgmental but also displays a total lack of education on the topic of the Holocaust. As I pointed out in my book, Israel: A Nation of Warriors, the Jews actually did fight back, on every front, in every manner (read the book for details). One of those fronts was the Warsaw Ghetto Uprising which began on the eve of Passover, the 14th day of the month Nisan in the Hebrew year 5703, or April 19, 1943.

The revolt was heroic, but only involved a small number of Jews. By the time the revolt took place nearly 90% of the Jews of the Warsaw Ghetto had been deported to death camps. At its height the ghetto numbered more than 460,000 Jews but they did not revolt. The revolt only took place towards the end when there was no longer any doubt that the remaining Jews were destined for slaughter. The initial uprising consisted of little over 1,000 Jews and a few Poles (In Poland, Jews were labeled "Jews" even if they could trace their ancestry in Poland back hundreds of years, so a Jew was a "Jew" while a Christian was a "Pole") Once the uprising began thousands more Jews joined in spontaneously.

Why didn't they revolt sooner? Is this a particularly Jewish problem, or is it universal? Why don't more people sign up for Krav Maga Self-Defense lessons?  The Question is one.

The Answer is the same. People are are reluctant to take action, people are reluctant to see the painful truth. When the warnings appear people see various options of how to deal with it; there are always multiple options to consider.

We look at Bullying, neighborhood crime, rape, but do most people take up self defense training? Do they join neighborhood patrols? Do women sign up for anti-rape classes? No, on the whole they do not.

People consider various options, if they even think about it at all. They might consider, resistance or accommodation, looking to outside sources to solve the problem. Hesitation, fear, hopefulness, delay our response, most will not seek training.

The Jews of the ghetto were no different. No different than the average American who nightly watches crime reports on the news but doe not sign up for self defense training. He remains inactive. But there are those who eventually do make that call, who do step into the training hall. What we need to understand is in is a process. There is a long process that leads to self defense just as there was a long process that lead to the Warsaw Ghetto Uprising.

"Armed confrontation for the last cadres of Ghetto prisoners was the direct result of a long process." (Uprising in the Warsaw Ghetto, Ber Mark, 1965)

The process began early with the Anti-Fascist Bloc (Blok Antyfaszystowski), an alliance between various Jewish groups that saw the writing on the wall. Their illegal publication, Der Ruf (The Call), attempted to arouse the ghetto populace to revolt. All of their leaders were murdered by the Nazis between May and August 1942; Aron Finkelstein, Mordekhai Tenenboim, Shmuel Meretyk, and several others.

I often speak to new participants at seminars, what brought you here? What makes you spend a late night or a Sunday at a Krav Maga seminar?

The answer is that it was the culmination of a long process, it was not spontaneous. It may have started with bullying or a rape, there was a long process of digesting what had happened and what could have been done. It takes a long time for one to make that decision to take action.

The leaders of the Warsaw Ghetto Uprising and the Sobibor Uprising and others, were either military veterans or products of the Jewish youth movements who had been raised in the spirit of revolution. But most Jews at the time had no concept of armed resistance. I often see post by gun advocates showing photos of helpless Jews being murdered, and the post state: "This is what happens when a government disarms the population."

But this is a complete historical error: I have never met, heard, or read of a Holocaust survivor or victim who was disarmed. Other than those preparing to immigrate to Israel or those who served in the military, none had ever so much as touched a firearm. The Jews did not posses guns, they possessed books! No one needed to disarm them. The Holocaust is not a gun advocacy issue.

The Jews had always trusted their leaders to solve the problems. Taking independent action, training in firearms and self-defense, took a long process. It took a long series of events to come to the conclusion that we must take matters into our own hands, that we must be our own protectors. That is equally true today for most people.

These blogs that I write are part of that process, to awaken people to the need for self-defense training.

Israel: A Nation of Warriors
By Moshe D. Katz

The history of Israel as a fighting nation; from the Biblical patriarch Abraham to our own times and the soldiers of the IDF - Israel Defense Forces.

What makes Israeli security the best in the world?

How did our Biblical ancestors fights? What weapons and strategies did they employ?

How did Krav Maga develop?

Israeli airport security, and much more.

or on Amazon (also available as kindle)