Many people devote a great deal of time to the question, "What will people think".

Now if you are a media consultant, a polling expert, a marketing director, these are valid questions, but for most of us it is a debilitating waste of time. Furthermore it can lead to life threatening situations.

We worry about what people might think of us because we fear being judged poorly. And this poor judgement of us will affect their behavior towards us.

I believe this approach to be inherently wrong. I believe it is highly self-centered.

I do not believe people's actions are based on their opinion of you but on their own personal needs.

Of course it is important to make a good impression. Of course it is essential to treat everyone with respect. I am not saying show up to a black tie wedding in your pajamas, no, not at all.

What I am saying is that when making an important decision do not be overly concerned of what others will think of this. You must do what serves your interests best, their behavior will not be based on their opinion of you but on their strategic needs.

They will be thinking of themselves, not of you.

For example, you open a store in the local mall. You want to stay open later than other stores, but you fear their reaction. You are concerned that they might view you as "too ambitious" and then make an attempt to push you out. In fact they will keep you in the Mall as long as your presence serves their interest, and not a moment longer.

You have a Krav Maga school and are thinking of offering a fitness program, but...you do not want to upset the gym nearby. So you choose not to open your Krav-Fitness class in hopes of winning over their support.

One day they decide to open a pro shop and need your space. So they put moves into place to oust you from the desired location. Now you lack the financial means to fight back. Your attempt to appease them did not work. No one cares that you are a "nice guy".

What I am saying is if you have a goal - stay focused on that goal and do not get sidetrack by worrying about what other people may think. You have to act in the best way you can to achieve success. They are busy focusing on their goals, not on you. You must be firm in your action. Too much contemplation about what others may be thinking will strangle your progress.

When it is time to take action, that action must be focused, not diluted by thoughts of "what if", or "if I do this what will he think". These superfluous thoughts create doubt which will hinder your action. No not allow Doubt to own you.

In 1973 Israel was facing an imminent attack on two fronts, they knew it was coming but the leadership was worried about America. They were more concerned with what America would think then with the tanks and guns of the combined Syrian and Egyptian armies. Can you imagine how bizarre this is?

The Israeli political leadership did not want to be seen by the USA as the aggressor in this war. They felt the USA would be "mad" and punish Israel by refusing to help, if Israel needed it.

So Israel took a huge first blow, and sure enough needed help, which came.

Secret documents, released years later, show that America's decision to help was based entirely on its strategic interest concerning the Soviet Union. In fact had the Soviets agreed to cooperate with the USA then America was going to take a neutral position. The American decision had nothing to do with Israel's "behavior". It had everything to do with America's strategic interests and global conflicts. (30 Hours in October, page 256)

Stop worrying about others may or may not think, do what you need to do!

Treat people fairly and honestly but do not handicap yourself with trying to win favor with other people. It is a weakness, a lack of confidence on your part.

If you are being attacked you must respond with everything you have. Do not fear that "looking too strong" will have negative repercussions later. You must protect yourself.

Sometimes new students express a fear that if they hit their assailant too hard it will upset the assailant and "make him even more angry". 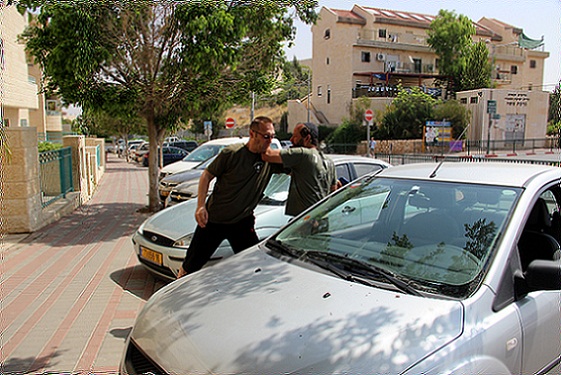 Come to Israel, join us in Maaleh Adumim in the Judean desert near Jerusalem. Train in all aspects of real Krav Maga.

Learn to fight back in and around a car,