Note: I am editing this blog today, January 8, 2021, and as I read it I am shaken, as if it were written by someone else. I see a person sitting in the comfort of an airport lounge, a symbol of success and luxury, being transported back in time, to a time of great darkness, to a time when the light of the world, of humanity, was being extinguished by the Forces of Darkness. I am transported to the heart of a woman, a mother, standing on a balcony and holding her precious baby, as the flames grow higher around her. The bravery and courage of these women, their light during the times of greatest darkness, do not fail to shock me yet again. My heart beats as I can sense the ghetto in flames...

Most of these women perished in that darkness but a few survived to light the path to a new dawn. and now it is our responsibility. It is our responsibility to remember, to feel, to sense their pain and their heroism. But it is also our responsibility to keep the struggle, "Don't give up the fight". While the ghettos are long gone, violence is not. The pain and fear for many is indeed great. Atrocities still take place every minute of every day in every land. We must take up the sword, we must train, we must keep the light alive. We must reach those in greatest need and help them help themselves. We must be the force of good in the world. (See below how to get started with your training, do not delay).

It does not matter who wrote this blog, when I read it today I became inspired, one can sit in luxury and yet remain sensitive to the pain of others, to the nightmare that might befall an innocent women, or child. As the Torah admonishes, Do not stand idly by your brothers' blood or your sister!  (Leviticus, chapter 19, verse 16)

I hear the cries of these women, from long ago, and I answer, I hear you, Never Again! 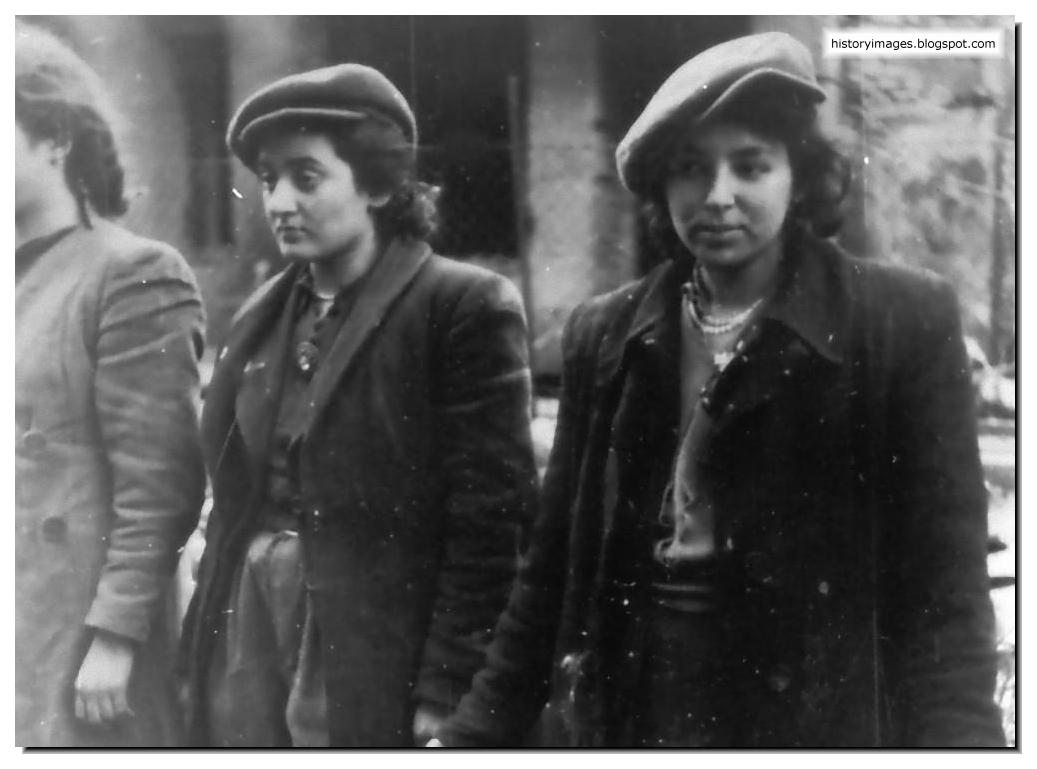 Jewish fighters of the Warsaw Ghetto, captured by the Germans. 1943.

I am at the airport in Los Angeles, relaxing in the lounge and thinking. It was a wonderful week here, visiting old friends, rekindling some memories. It was here that I became a Jewish Activist, a fighter for Jewish rights. It is here that I trained in martial arts so many years ago, when the Karate Kid was inspiring youth, and great music was being created. Here I read books about Jewish heroes, about the Warsaw Ghetto Uprising, the Bar Kochba revolt and the many wars of Israel. And it is here that again I am thinking of our glorious yet tragic history.

I am thinking of the Jewish woman, the heroic Jewish woman. A woman of valor who shall find? asks the writer of Proverbs. Over the years we have found many.

I am not one of those who finds heroines in women who break the boundaries of tradition, who challenge traditional roles or fight for the sake of making a certain point. It is the modest, humble Jewish woman whom I admire, the one who quietly does what needs be done, the one who shapes the future, in many ways. She does what she needs to do, for her family, her people.

When she needs, she leaves the role that she prefers and she enters the combat zone. This is not her first choice. We see it throughout Jewish history, brave Jewish women emerging to fight our enemies, when they are needed, and then quietly, without seeking fame or reward, returning to their traditional roles.

There was Hanna and her seven sons who refused to bow before the idols of the Greek Hellenists. She sacrificed her children's lives rather than compromise the dignity of her people and her faith in God.

There was Hannah Szenes, in 1944 she left the safety of the land of Israel and parachuted into Yugoslavia in an attempt to join the partisans and help the Jews of her native Hungary. She was captured, tortured for days but never revealed any information that could be used to capture her colleagues. She was executed before her 23rd birthday.

We see it during the Holocaust, so many times, that many books could not possibly describe all these brave Jewish women. Daughters of Hasidic Rebbes, daughters of great rabbis, put aside the apron and took the rifle in hand and fought like no one fought before.

They took Molotov cocktails and ran without fear to the German tanks, mounted the tanks and threw the grenades or explosives inside. Many died trying. They fought in the ghettos, in the forests as partisans, in the Russian army and in the pre state militias in Israel. They were snipers, fighters, smugglers, warriors. They faced the enemy without fear or hesitation. None exceeded them in bravery and self-sacrifice. The German war machine, the Wehrmacht, the SS, were no match for these women. Often unarmed they defied the power of the mighty oppressors.

...there is a story from the Warsaw ghetto uprising.

The mighty Germans could not defeat the starved Jews, so they brought planes and tanks and flame throwers, and they set the Jewish Ghetto on fire.

A young Jewish woman stands on the balcony, she is holding her baby in her arms. The building is on fire, the flames are rising, there is no escape. All is lost.

She looks down from the balcony and sees the great German general, Jurgen Stroop, the man who promised the final liquidation of the ghetto as a birthday gift for Hitler.  Such an arrogant man, whom to his dying day never regretted his actions and never repented.

The young Jewish woman shows no fear, she stood still as the flames roared near her, and noticed General Stroop in the street below. "I ask you no mercy" she shouted at him. "but remember, punishment will not escape you either!"

When the flames were about to swallow her, she clutched the baby and with a horrible shriek, jumped to the pavement. (Uprising in the Warsaw Ghetto, Ber Mark, 1975, translated from the Polish)

Such a shriek, such a cry, must be heard in Heaven!!

Stroop was hanged at Mokotów Prison at seven o'clock in the evening on 6 March 1952. Let that day be an international holiday. the words of the Jewish heroine were fulfilled like prophecy: the power and glory of a Jewish woman.

There were so many brave women..."...an eyewitness Joseph Lehman, tells of a bitter fight at 3-5 Bonifraterska Street.  The Germans had sniffed out the hideout and laid siege to it, but the Jews inside were determined not to come out. Sarah Rosenboim, a fighter, crawled to the entrance and hurled a grenade at the Nazis, wounding several.” (Mark, page 80)

The youngest member of the combat group at Leszno 74 was Halinka Rochman. A young girl, she was the only daughter of a pious Hasidic family. She joined the resistance. She was offered the opportunity to escape but refused. "My place is in the ghetto with my comrades"

On April 27, 1943, in the midst of battle, she noticed an enemy gun barrel pointed at her commander, Ruzha Rosenfeld. Without hesitation she shielded her commander with her own body and was felled by the bullet meant for the other. 'My life is less important than Ruzha's' the dying Halinka said, 'She's the commander, we need her more'" (Mark, page 56)

Many women acted as couriers and weapons smugglers, in particular those who had an "Aryan" look. These women were invaluable to the struggle for survival and resistance. One such heroine was Tosia Altman. Tosia came from a Hasidic family in Wloclawek, Poland. She had an opportunity to escape but chose to become a courier and smuggler for the Jewish resistance. She volunteered to enter the Warsaw Ghetto and with her blonde hair and her fluency in Polish was able to pass herself off as Polish gentile. Altman found that despite the warnings and proof, the Jews of Warsaw refused to accept that they were about to be exterminated. She faced many challenges but never gave up. She became the liaison to the Armia Ludowa (Peoples army, Polish) and was able to smuggle grenades, explosives and weapons. She died of her wounds at the age of 23, May 1943.

Zivia Lubetkin - I grew up with this name. Lubetkin was the only woman on the High Command of the Jewish resistance group Żydowska Organizacja Bojowa. She came from the town of Slonim, known to this day as the seat of great Hasidic rabbis and Talmudic learning.  After the war she married fellow fighter Yitzhak Zuckerman. Their granddaughter, Roni Zuckerman, became the first woman to pass the course to become an air force pilot, becoming the Israeli Air Force's first female fighter pilot in 2001.

Today we are proud of our many female Krav Maga instructors who are devoted to helping others stay safe. We have women teaching women; there are many women in the religious community who will not train with men. We have female instructors; modest wives, mothers, and singles, who devote themselves to these women so that they can train in the own comfort zone without compromising their religious beliefs. I look at them and I feel the link back to those heroic Jewish women of the past, who left their comfort zone, who abandoned fear, who sacrificed for their people as a mother sacrifices for her children. This is a great and holy legacy. Our task, all over the world, is a great and holy task. Never take it lightly. Glory.

"I, after all, survived all my dangerous missions, while thousands of Jewish boys and girls fell in battle, losing their lives heroically fighting for freedom.

These heroes were buried in the woods with no monuments, stones or signs.  Nobody will ever know what they went through and where they lie. 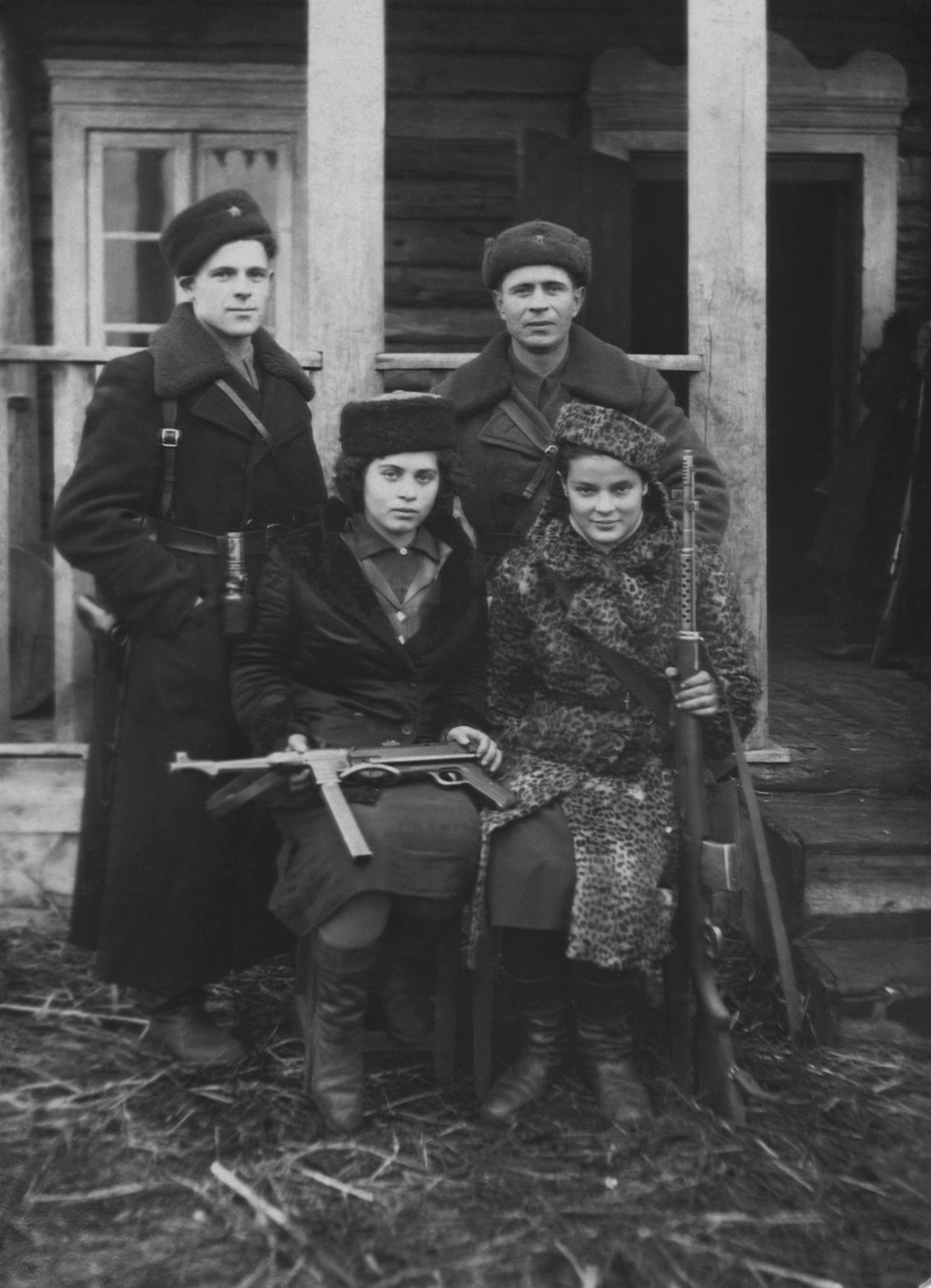 Faigel, "Faye" Lazebnik, on the right, with partisans, Belarus,