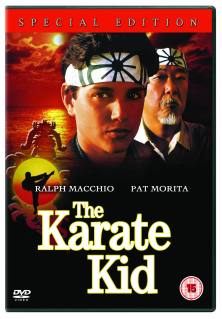 Well of course they are fiction, but are they really? No, the great ones are not fiction at all, they embody the soul of the fighting arts and they are a tremendous source of inspiration for those that understand them.

The Karate Kid is the movie that finally pushed me into starting karate lessons, and today I head an international martial arts organization and have touched the lives of thousands of people in Israel, the USA and world wide. Is that real?

The Karate Kid introduced the greater public to the way of the warrior, the values in martial arts training and the vital role they play in people's lives, especially the young. Is that real?

Who does not know a 'Daniel San'; a kid lacking in confidence with a chip on his shoulder? How many Daniel Sans end up as criminals or angry disgruntled adults? How many of us yearn for the guidance of a Mr. Miyagi? Is not all this real? There is so very much to learn from this film.

In our lives today we demand instant answers, instant satisfaction. We have instant messaging, instant coffee, instant dinners. Mr. Miyagi shows us that sometimes we have to have faith in someone wiser, older. We must follow even if we do not understand at first. We must trust our guides and elders. In order to learn we must first accept. There will be ample time later for questions but first we must take a deep breath, and, accept.

We may not always understand the advice we are given, that is how it is meant to be, we have to ponder it over time. Mr. Miyagi says, "Daniel San, do you understand?" and Daniel answers, "I think so."

We must realize that learning is a process and this process cannot and will not take place unless we trust our teachers, our guides.

I recall our uchi deshi (Live-in students from Japan at the Kyokushin dojo in New York City), they did not come much tougher than these guys but I still recall their hearty laugh at jokes (always in Japanese) after class; they had balance.

The stories are real, the characters and emotions are real, the message is real, only the script is fiction. Most importantly the ability of the movie to inspire us to become better human beings is very real.

Mr. Miyagi is an evolved human being, Daniel San; not yet. Mr. Miyagi has his human weakness, he has his ongoing pain at the loss of his wife and unborn child, he has a certain emptiness and a need to give of himself. But Mr. Miyagi is very much himself, he knows who he is. He is calm and confident because he is at peace with who he is. He has a firm identity and sense of self, and he knows how to respond to others. He knows when to fight and he knows when not to fight. He is never provoked into a fight; he knows this is a sign of weakness, not strength.

When Daniel wants to leave, Mr. Miyagi does not stop him. Daniel must come back on his own, when he is ready, on his own terms.

When the 'bad guy' karate teacher insults Miyagi front of the entire dojo, Mr. Miyagi does not respond with violence or even with words. His only response is a calm, very honorable, stare right back at him. He does not need to argue back, he certainly does not need to hit. He will chose the time and place to respond, if and when it is appropriate. He does not feel embarrassed by the insults and taunts of a less evolved human being.

Too many martial arts students feel they must always fight back, too many do not understand the strength that comes from choosing your fights and not being provoked into someone else's anger.

The Karate Kid (parts 1-4) covers so many aspects of the true values of martial arts. After so many years of training the fight scenes no longer impress me (with all due credit to Pat Johnson, the wonderful trainer), but the depth of character in the film continues to inspire me.

Daniel : Hey - you ever get into fights when you were a kid?

Daniel: Yeah, but it wasn't like the problem I have, right?

Daniel: Yeah, but you knew karate.

Daniel San: You mean there were times when you were scared to fight?

Daniel San: So, karate's fighting. You train to fight.

Mr. Miyagi: That what you think?

Mr. Miyagi: Then why train?

Daniel: [thinks] So I won't have to fight.

Miyagi: [laughs] Miyagi have hope for you.

Come to Israel, join us for training and become a "Krav Maga Kid". The real deal.