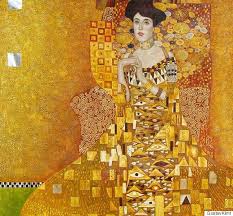 Woman in Gold, portrait of Adele Bloch-Bauer, a Jewish Austrian woman. This painting, among countless pieces of art stolen by the Nazis, was eventually sold for 135 million dollars.

This work of art was eventually returned to its legal owner, Maria Altmann of Los Angeles (formerly of Vienna, Austria) but over 100,000 similar works of art have never been returned and are still in the possession of thieves, people who continue to profit from the Nazi era. There are also countless buildings, offices, apartments and homes that were taken from Jews and have never been returned or compensated for.

Neo-Nazism is on the rise, who will take a stand?

I was asked a question...

It was about a year ago, during our Krav Maga Tour and Train session. It was a most honest question, a sincere question, a question that took courage to ask. It was an innocent question.

But this question showed an abysmal lack of knowledge, a glaring hole in one's historical perspective, an insensitivity that cries out to the heavens, a generation that simply forgot.

I was asked a question, a question born of ignorance, ignorance that can hardly be forgiven.

I was asked a question, by a young German woman. She is certainly not an anti-Semite, she is not a hater but she part of a new generation that is often obtuse when it comes to the painful past. I have seen all over Europe, in particular in France - a country that greatly aided the Nazis in their extermination of the Jews of their country. I have seen young people who do not understand the unique suffering of the Jews. These people prefer to live in Fantasy Land, a fairy tale where "there were a few bad people" but all is good now and, "Lets stop living in the past".

But this is not true, they are wrong, and on this point there can be no discussion.

I was asked a question...

Her question was not only her own, she asked me in the name of others, her friends back in Germany. They simply did not understand. Perhaps they could not understand, not until they come to Israel, not until they walk a mile in our shoes, a mile that runs through Masada, the sites of ancient battles and Yad Va Shem Holocaust Memorial.

I was asked a question...and it startled me that any European could be so clueless about their own past.

I was asked a question and it shocked me that they could be so uniformed about our lives.

I was asked a question that made my whole being shake..

I was asked...Why does the German government still have to pay this generation of Jews continued Holocaust reparations? Will his never end? Will the German economy forever be drained by this?

By the end of her stay in Israel she fully understood the answer, after long discussion and her participation in our Tour and Train Israel Experience, she came around completely. Now she acts as a spokesperson on behalf of the Jewish people of Israel, now she no longer asks, now she explains to others. She continues to visit Israel and to train here with the best.

But I suspect that her audience still does not understand. They must come here.

They must come here.

To come to terms with themselves, their past, they must come here and live with us for a while. They must complete the journey.

Everyone talks about the destruction of over six million Jews in Europe during World War Two, crimes committed by the Nazis and their very willing accomplices in many countries, but there is more.

What many ignore is that along with the lives lost much property was also lost. The property of millions of Jews, the bank accounts, the homes, the businesses and the art works, valued at many billions of dollars, was also stolen. Add to that "back pay" for slave labor during all those years.

In September 1951 Chancellor Konrad Adenauer of West Germany addressed his parliament: "...unspeakable crimes have been committed in the name of the German people, calling for moral and material indemnity....The Federal Government are prepared, jointly with representatives of Jewry and the State of Israel...to bring about a solution of the material indemnity problem, thus easing the way to the spiritual settlement of infinite suffering."

This lead to what became known in Israel simply as "reparations".

I used to work in a bank in Jerusalem. I recall at a certain time each month elderly Jews with heavy foreign accents would come in to collect their reparations, a small monthly stipend from the German government.

Contrary to the understanding of our young German friend, it is not "The Jews" who receive this stipend but only Survivors who can prove what assets they have lost. The vast overwhelming majority of the financial losses of the Jewish people of Europe have never been recovered, and never will be. What we have received is not even a drop in the ocean. (and this expression is not used in an aggerated tone).

The minimal sums that are received are used by elderly lonely survivors to cope on a daily basis. Many of them live below the poverty line. Many suffer from various forms of depression and mental illness. Many have to choose between using the heat in the winter or buying the medications they need. They must choose between buying a new shirt or having lunch.

I said to my young German friend, in as calm a way as I could, devoid of the overwhelming emotion, "Imagine, your father owned a textile factory, was a self-made man. He owned the entire apartment building and collected rent. He owned an art collection. Your mother and grandmother owned gold jewelry. But then the Nazis came and stole everything, your family was deported and killed but you alone survived. And now you live alone in a small apartment in Israel. You live with your memories, you trauma, your fears and anxiety.

You live on a small government stiped which is hardly enough to cover your basic needs. All you asking from the German people is a little extra, to pay for heat on a cold day, to cover the cost of your medications, to have enough to eat. And...

Well first, no one is paying "The Jews" anything.  A small number of elderly survivors with legitimate claims are receiving a tiny fraction of what they have lost, A tiny fraction of that which was stolen from them at gun point.

Why? Because they are still suffering, because there are no "survivors", no one has really "survived". There are Witnesses to the greatest crime in human history, there are people who emerged physically not dead, but there is no one who truly survived.

To this day every survivor suffers; they, their children, their grandchildren, and all of us. As one Israeli said, "the Holocaust is in our DNA", we live it on a daily basis.

I have a relative, lets' call her Rachel. She was only a child when "it" happened. Her parents were taken away, fate unknown to this very day. She survived four concentration camps. Today she is old, she lives in fear. Every night the ghosts come to life, the Nazis are still there, in her nightmares. She cannot be alone. She calls for her children who must travel long distances to be with her.  Who is paying for those flights? Who is paying for her children to miss work? There is no compensation.

She can no longer be alone. She cannot walk alone, she lives in fear. And she is called a "Survivor".

Only those who can provide solid legal proof are offered any sort of compensation. The Italian insurance company Generali sold insurance policies to Jews at the start of the war. In order to cash in those policies the survivors had to provide proof and documents. Sadly, there were no deposit boxes at Auschwitz for Jews to store their documents. The insurance companies demanded death certificates and asked why the policy holders did not continue to pay their premiums!

Generali sold thousands of policies to Holocaust victims, many other European insurance companies did the same. Almost no Jews could make good on those claims. And I was asked a question, why do "The Jews" continue do demand money, why can't we let the past go?

IKI Krav Maga is not only about physical self-defense, it is also about personal emotional survival, of individuals and of nations.

I was asked a question...and as long as God gives me, I will be here to answer.