"Just because someone is a lot smaller than you doesn't mean you're entitled to push them around" (Tayla K.)

Like most of us I have a background in traditional martial arts; that is what we grew up on; Karate Kid, legends of the Far East, stories of great masters who meditated for years etc. We swallowed it up hook, line and sinker. We believed there is no other way, there could be no other way. Over and over again we were told "the short way is the easy way, but it is the wrong way". And how could we doubt the great serious looking masters. 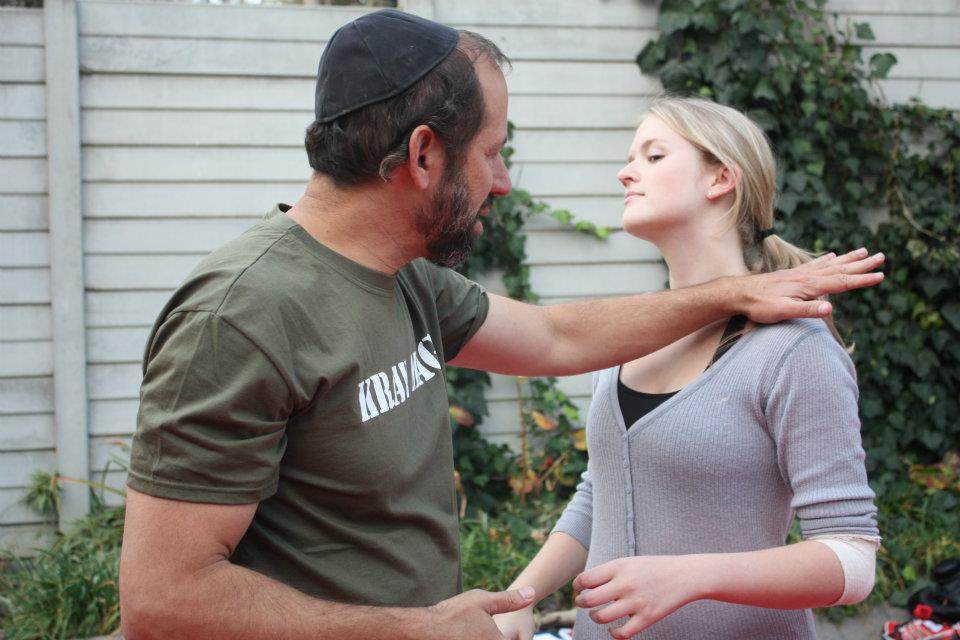 Turns out it does not take years to learn enough basic self defense to save your butt in a real life situation. In fact sometimes the over-training and the overly fancy moves will only hurt your chances for survival.

There are certainly wonderful benefits from long term training, and I totally advocate training in Krav Maga as a life-long pursuit. You can never train enough. Sometimes after three months of training a student will be so thrilled with what they have learned that they cannot imagine there is anything more to learn, or any room for improvement. Nothing is further from the truth.

Over the years I have found that my techniques have gained a certain, almost spiritual, flow. The moves have become a part of me. Also with years of training I have found better, simpler and more efficient ways of doing things; teaching and training.

So I am not in favor of only doing a 10 day course and saying; that's it, I got it. No, it is a never ending process. The difference is that unlike traditional martial arts it will not take you years, (if at all) to reach the point when you can handle yourself in a bad situation.

Over the years I have heard countless stories from my students and their students of real life cases of Krav Maga application on the street. I have heard great stories of success in every possible situation.

Just recently an American student, who attended only one seminar with me, (and that was the extent of his training) was held up a gun point in a bar while using the urinal. He used an IKI Krav Maga technique and succeeded.

Another fellow was attacked by three Arabs in the Old City of Jerusalem, he is quite short and small, and he prevailed.

The case involves Tayla, a wonderful young woman who I had the pleasure of meeting and training with in South Africa. She is a real beginner to Krav Maga and, together with her dad, trains with IKI Instructor Alan Mann in Johannesburg.

Here is her story in her own words.

I was at university and a guy I know came up to me, asking me where I was going to be over the weekend etc and when I said I had to go to my next lecture, he hugged me goodbye and started trying to push me backwards into the flowerbed. I tried to push against him, but he's a big guy so he carried on trying to make me fall back to prove his strength or something equally silly like that. So I did a quick foot sweep which shifted the balance and he landed up being the one who went down.

While he was getting back up off the ground he said "What the hell was that, karate or something??" So I smiled and said "No karate, just Krav Maga." His expression was priceless! ...Just because someone is a lot smaller than you doesn't mean you're entitled to push them around :)

The bottom line, it need not take years of patient training to learn how to defend yourself, there is a short cut and it is called Krav Maga.

And Tayla, proud of you! 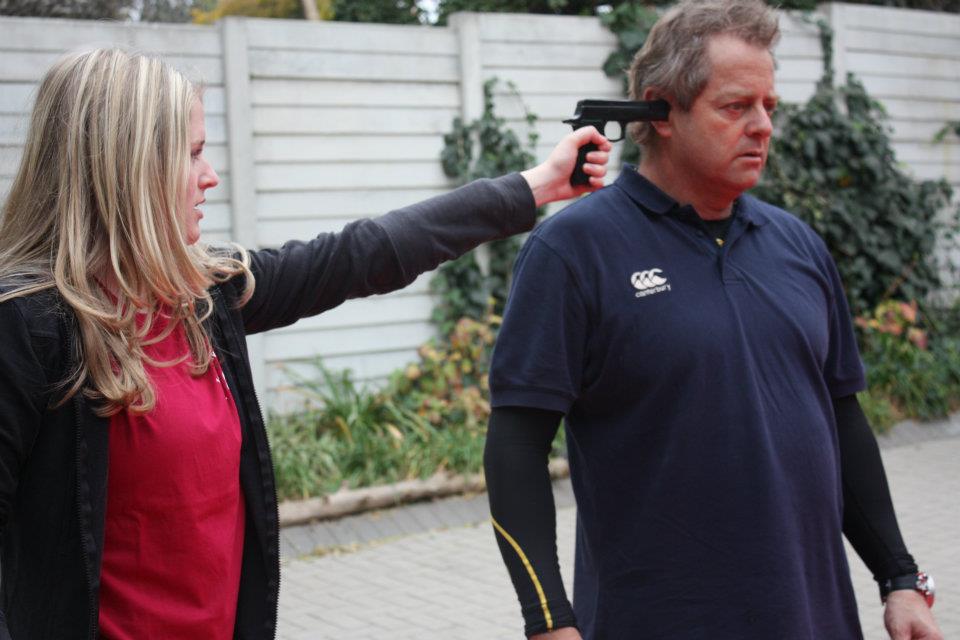 Tayla training with her Dad at Moshe Katz's seminar in South Africa, July 2012 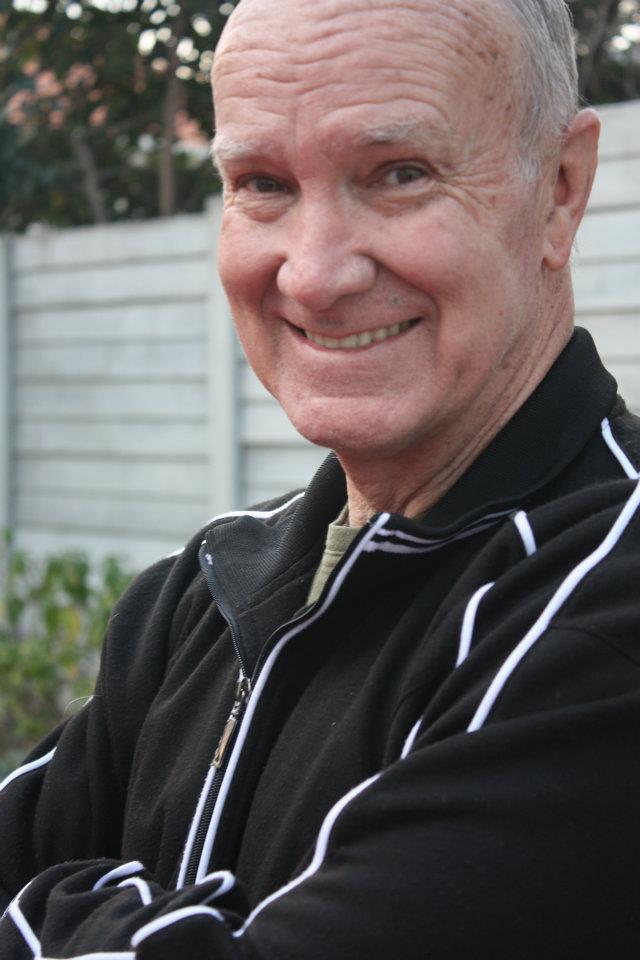 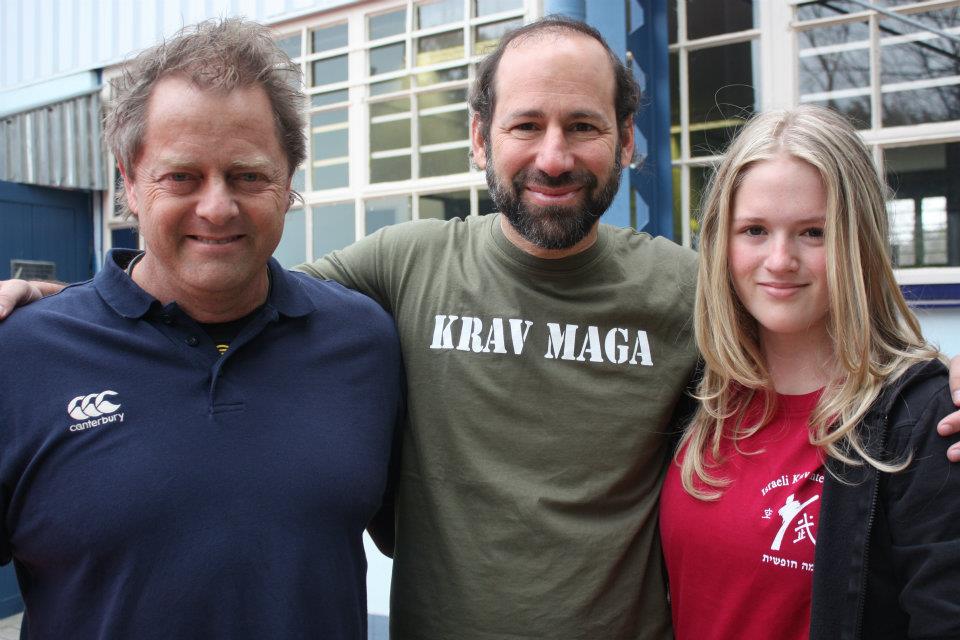 Come to Israel for intensive Krav Maga training and see your self defense skills radically improve.

At the same time learn about Israel and the people and culture that produced Krav Maga.