As a not-yet-karate student the techniques and the training in the first Karate Kid film truly inspired me. Not only that I found the techniques dazzling but I also believed them to be effective in real life violent encounters. I was sold on karate training. That led me to embark on a lifelong journey in martial arts, every step of which has been a thrill, an exciting adventure and a process of discovery and enlightenment. I would not trade one day of training in any of the schools which I attended; karate, judo, wrestling, jujitsu, MMA, BJJ, Tang so do, pressure points, Gung Fu, Kickboxing, Thai Boxing, Choy Lee Fut, Wing Chun, Krav Maga etc.

However looking back many years later, as a veteran martial arts instructor and a student of reality violent encounters all over the world, I find the techniques of the film amateurish and unconvincing. I now realize that almost none of the actors had any real martial arts training, all the moves were choreographed and none appear to be the least bit effective for actual self defense. Yet I still hold the film in high esteem and consider the wisdom espoused by Mr. Miyagi to be profound and relevant. The same can be said for many films. In those days I never missed a martial arts film, from Pray for Death with Sho Kosogi to late night Chinese Kung Fu films to Van Damme etc. To me this was required viewing.

I no longer have much interest in martial arts films. For the most part they bore me and the techniques I find ridiculous. And yet they do have some value, and here lies the conflict.

One hand I find these films totally unrealistic and they create a false image and false expectations of martial arts. I pity the student who actually believes that he can train in Aikido and throw tough guys around like rag dolls, ala Seven Seagal in his films. No, sorry, I believe this is creating a totally false sense of reality.

On the other hand these films do inspire a certain number of people to take up martial arts training. While some may soon be disappointed and discouraged to see what real martial arts are like, others may continue on this path and achieve true ability. These students will have to learn to separate fact from fiction, real self defense training from movie stunts done by actors and stuntmen.

I have friends in the industry and I respect their work. We all need something in life to lift us up,  take us away from our daily life for a few hours, entertain us, relax and even inspire us to make some changes in our lives. Some films attempt and succeed at creating a picture of reality; what a war feels like, what crime feels like. These films aim to let us feel the pain of those who experienced something we never did. The Band of Brothers for example is a good case in point. That is brutal and honest, and those who were there attest to its accuracy.

Other films are entertainment. We need to differentiate, we need to understand what is real and what is Hollywood fantasy. I respect the skill of martial arts actors. I respect the skill of the screen writers and the cameramen. I respect the directors and the makeup artists. We must however be careful to understand that these actors are in fact, actors. To learn true martial arts you need to train at a proper martial arts study, and as you walk in the door please forget everything you saw on the Big Screen. If the movies got you in the door, great, but then leave the Fantasy world for entertainment. 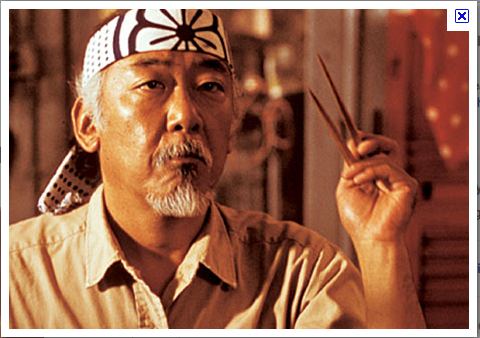 There is much to gain from martial arts films, but be careful not to take everything literally. I do not think I can catch a fly with chopsticks, despite years of training. As we say in Israel, "You live in the movies". We choose to live with reality. Join us.