My mother cringed and wanted to hide. My father accepted that that is his son, same as himself and same as his late father Moe Katz. Different, for better or for worse. Different.

I have observed myself closely, looking at the many flaws, the many shortcomings, the aspects that rub people the wrong way and all those behavior patterns that hold me back from achieving certain goals.

I have discovered a certain truth, and this is the first step towards positive change. It has taken me 50 years to see this trait; When I get nervous I revert back to my conditioned behavior.

When I get nervous I become defensive. I revert back to a protective shell and I am not open to any new ideas. I become distrustful of those trying to force new ideas upon me, I reject change outright.

Only when I am with someone whom I totally trust do I become open to life changing changes. One particular friend who has stimulated much positive change in me is a friend of 35 years. He too admits to being less than perfect, (it is amazing how many less than perfect people there are) but his deep concern for me helps him spot areas of difficulty and challenge and it helps me accept often harsh criticism.

I believe, after more than 50 years of observation, that the best predictor of future behavior is....Past Behavior.

Especially when nervousness sets in, we revert back to the familiar.

A high ranking highly respected martial arts instructor and military veteran was doing a test for a rank with our Krav On Line program. He had been trained for many years in a different style of Krav Maga. He had come to see the faults in that style and switched to the IKI way of doing things. This man has years of training.

When it came time to doing his test, via video, well...he messed up. I was shocked. Why was he sending me video clips of the "other Krav Maga"? Why was he doing "old Krav Maga"?

He told me. He got nervous and just reverted back to what he knew.

I thought about this, about the lesson he just taught me. He is a military veteran, a highly trained martial artist, very talented, and yet...when he became nervous he reverted back to his previous training even though he had already rejected those techniques as inferior and had made a choice to join IKI Krav Maga, and even though he did in fact learn the new ways. (and later tested very successfully and fully earned his new rank).

Listen to the mantra of the soon-to-be-divorced-man (Just listen to any Blues album) "Baby, I can change, I can change".

But very very few people ever change. Aint' that the harsh truth.

For myself I would say the first step is recognizing this pattern, in times of danger, threats, anxiety and nervousness we revert back to previous training and previous patterns of behavior. If we are not happy with this behavior then we must recognize this pattern and see what we can do to change this. If we do the same things we get the same results.

It must begin with a decision that the current situation cannot endure, it must change. And we must accept that change is painful and scary.

For a respected highly trained martial arts instructor it is very difficult to learn a new system, to begin without rank. The only way this change can take place is if he/she really wants that change, if he understands that the current situation is unacceptable.  The desire to reject the current circumstances must indeed be very great. For otherwise ...we will simply revert back to the old ways we are so comfortable with.

There is an old song, "How can I respect you while you hold on to someone you despise". But in fact we do it all the time.

We have a way of life, a way of doing things, a way of training, a way of living, that we despise, and yet we are afraid to change. We say we want to change, but when we get nervous we just revert back to the way things were before, the way things have always been, that way we are comfortable with. NO change takes place. 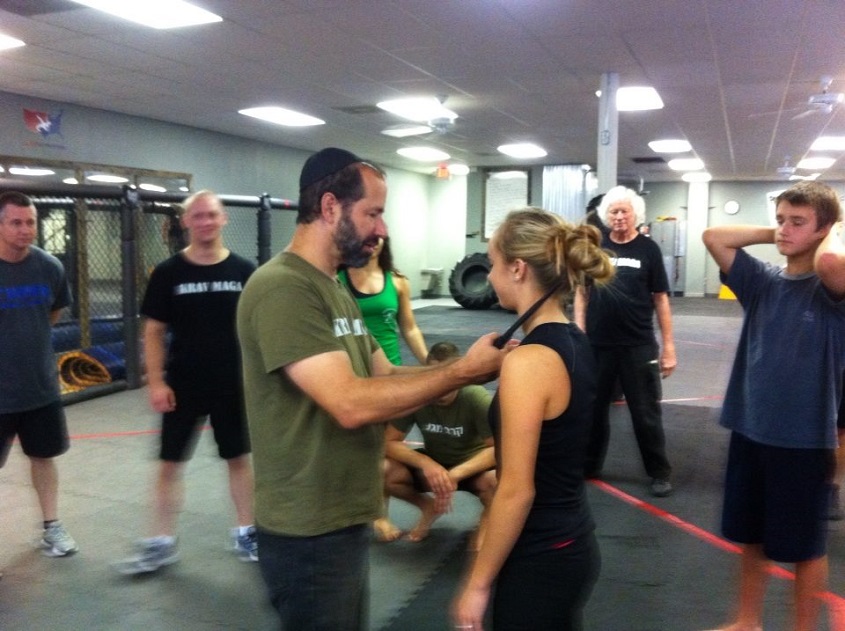 IKI Krav Maga seminar in South Carolina. In this photo are total beginners, young people and older people. In this photo are 4th and 5th dan black belts from other styles who have chosen to make a change and have done so successfully. Hats off to them.

The concept of how to change is crucially important in our lives, both in our daily lives and in our way of self-defense training.

If you are content to stare at your old black belt diplomas, collection of trophies and photographs, great. Have a beer, tell "war stories" and enjoy your life.

Those are the kind of people that come to IKI, Israeli Krav International.

Embrace change, always seek to improve, in life and in training. Only you can hold yourself back from the changes you want to see.