What happens where your worst nightmare becomes a reality?

What happens when the case you train for actually takes place?

We always include Counter Terror training as part of our Tour and Train program. Our instructors describe classic terror attacks, the worst case scenarios; children's playground or a crowded synagogue.

Last week such an horrific attack actually took place. We lost 5 wonderful people, four rabbis and a police officer who came to the rescue, but it could have been much worse. Quick action on the part of some of the worshipers and on the part of two traffic police officers nearby prevented a total massacre.

We at IKI are always trying to improve our defense. One of the ways we do so is by studying real life cases. We analyze:  What was done correctly? Where were there mistakes? Where is there room for improvement. This is the Israeli way.

The two attackers came in armed with pistols and meat cleavers, they shot and hacked. The worshipers were engrossed in silent devotion. Only the sound of the shots alerted some of the men.

Most had no Krav Maga training. Many went to the ground to avoid the shots. Others threw chairs at the attackers. From what I have heard the worshipers responded rather well considering the circumstances.

The odds were against them. They were untrained, caught by surprise and in the most silent sacred part of the prayer service. Their attention was to God, not to their surroundings. 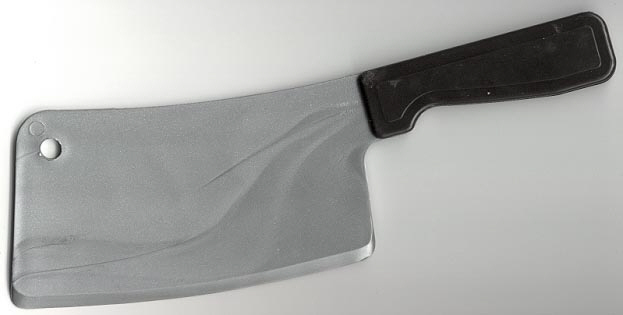 A meat cleaver, one of the weapons used by the terrorists.

Rabbi Goldstein, one of the survivors, described the attack. He was attacked three times with the meat cleaver but survived. I assume he had no Krav Maga training and did not know how to defend against such an attack but the fact that he survived teaches us that we do in fact have a fighting chance.

All too often I hear that there is no chance, that as soon as you get cut it is all over. I stress again and again that we must fight back and never give up. Even if you get cut you must fight back. Never accept defeat, never say "I am not capable of defending myself."

We are capable of defending ourselves. Yes, even if we are not top athletes.

Goldstein describes how after he was stuck three times he rose up and saw that the terrorists' gun had jammed. The terrorist had his back to Goldstein.

Lesson: Look for opportunities! Just as our defense may not be perfect and things may go wrong, so it is true for the attackers, things go wrong for them as well and we must be there, ready and able to take advantage of those opportunities.

Goldstein, hurt and bleeding, pulled down the terrorist to the ground. And what happened?

The terrorist dropped his gun and his meat cleaver. Again the lesson here is that we do have a fighting chance, if we are willing to act. The attackers are also human, they make mistakes, they turn their backs, they drop weapons, guns jam. We must train to fight back.

We train. We are regular people, not super heroes. We teach and train ordinary people. We work on attitude, psychology and skills. We train for the situations that are happening today.

Our techniques are simple and easy to use. They are designed for you, whatever your level of fitness. There attacks and the partially successful responses should be our wake up call to train in Krav Maga.

Krav Maga was designed for you, so you can deal with these situation.

Do not let anyone tell you that you have no chance. Goldstein fought back, so can you. And your training will make a huge difference.

Pray for peace but train for war.