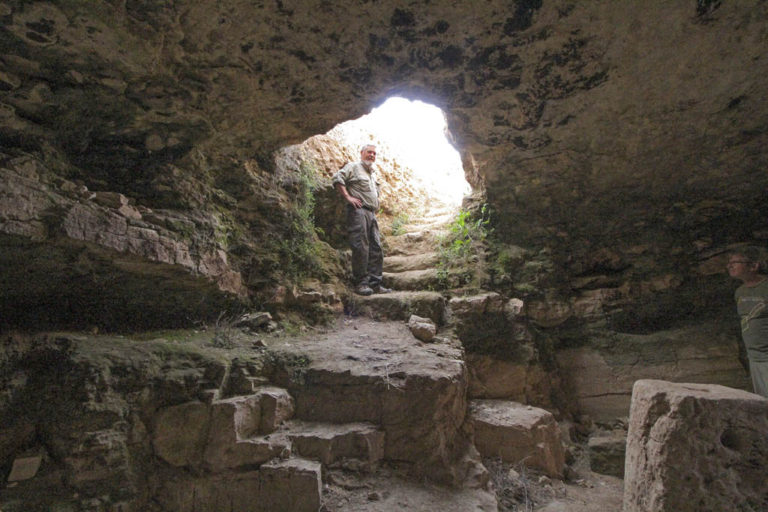 The cave near Ofra, they thought they were safe from the Romans. This is the main cave, but they hid in a cave within this cave.

It is the year 69. The Jewish revolt against the Roman oppressor has been going on for two years. Things do not look good for the Jews. The massive Roman empire has sent in a large force to suppress the Judean warriors. Vespasian the Roman general is systematically attacking and destroying Jewish villages.

It is the year 69, the great Temple of Jerusalem still stands. The Holy of Holies still functions. The Cohen clan still serve in Temple and bring the sacrifices.

The Roman forces show no mercy. Seven women and a small boy seek hiding. They hide in a olive press near Ofra. They feel they are safe. The cave is hidden from the surface and is difficult to see. In fact, no one saw it for close to two thousand years, until 2013.

In 2013 the seven women and the boy were found. They had been brutally murdered by the Romans in the year 69. Evidence of brutal killing was discovered, in the form of arrow heads and shoe studs of Roman soldiers. We can only imagine the fear, the terror, the painful death.

Their bodies, and then their bones lay unburied, undisturbed for 1,944 years. When they were conclusively identified as victims of the Roman aggression, they were formally laid to rest, with proper honors, in the modern Ofra cemetery. I was there today as they were joined by another righteous woman, my relative by marriage, Naomi Glickstein of blessed memory.

These seven women, what they had seen in their lifetimes! They had seen the ancient Jewish nation in its own land, they had seen the Holy Temple in all its glory, something that no Jew has seen in nearly 2,000 years. And they were brutally murdered by Roman soldiers, seven young Jewish women and a little boy.

Today I was there, as pure Naomi, a teacher, an educator, a rabbis' wife, was laid to rest. Now she is bound by fate with these other Jewish women, her long lost sisters. She can tell them that they did not die in vain, that the cause for which they died has succeeded. That now Ofra is in Jewish hands again, that Jewish women need not hide in underground caves, that Naomi has raised a generation of young Jewish women to follow in their footsteps, to carry on the legacy for which they gave their young lives.

The seven women are joined by one more, one who has fulfilled their dream, to raise more young women in our tradition, to know that we never gave up the fight, that Jerusalem is free once again.

These seven heroic women and the young boy who never had a chance to grow up, were reburied, with a proper Jewish burial in the town of Ofra, a thriving Jewish town in our ancient land. Today I had the privilege to be near them. 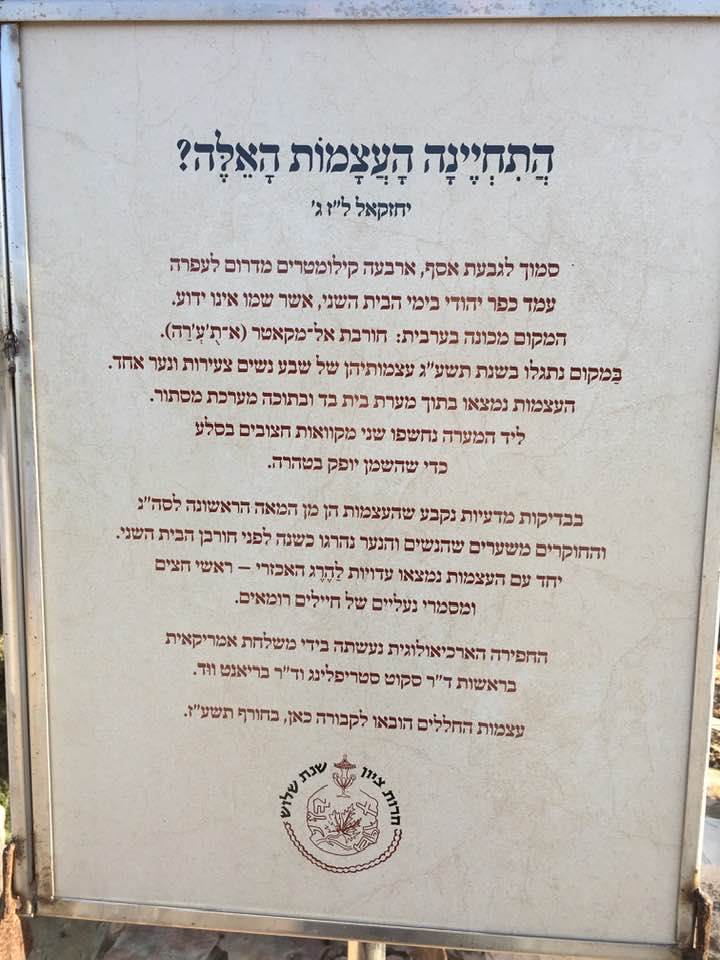 Shall These bones Live?

"Near Givat Asaf, four kilometers south of Ofra, stood a small Jewish village during the second temple period. The name of the village is unknown. The place is known in Arabic as 'the ruins of el mukatar'. In the year 5773 (2013 according to the world calendar) the bones of seven young women and one young boy were discovered. The bones were found within a cave, within a secret hiding place. This was a olive press, and there are also two ancient ritual bathes carved into the stone so that the olives could be pressed into olive oil in purity, according to ancient Jewish law.

Scientific analysis has determined that the bones are from the first century. Researches estimate they were murdered one year before the destruction of the holy Temple of Jerusalem, the year 69. With the bones were found evidence of the brutal murder - arrow heads and the crushing nails of Roman shoes. (spiked sandals). In the year 2016 the bones were brought here for burial." 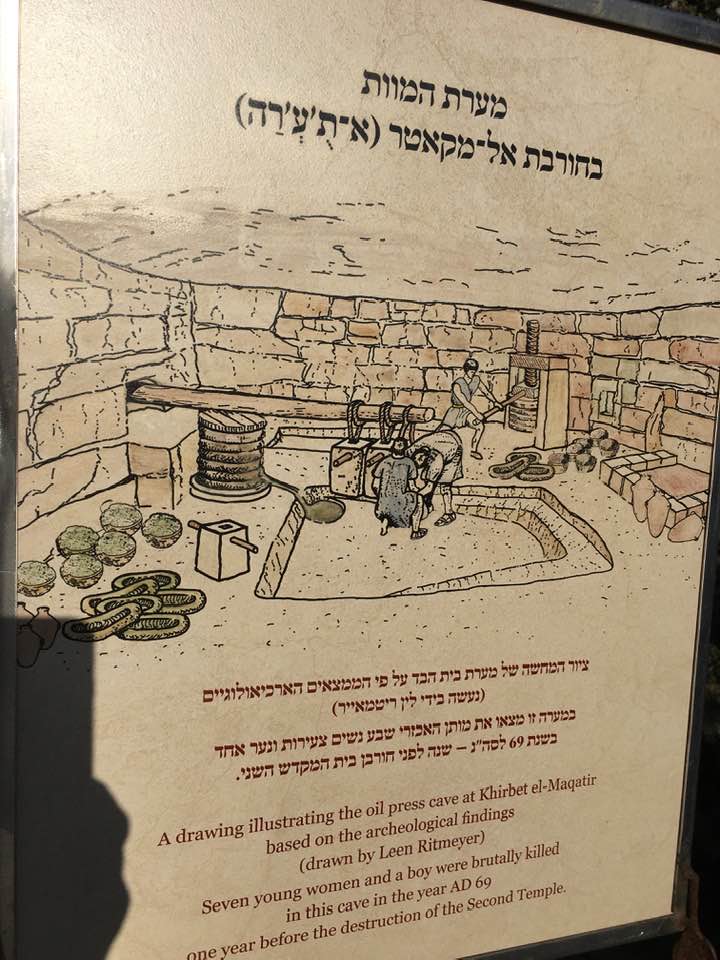 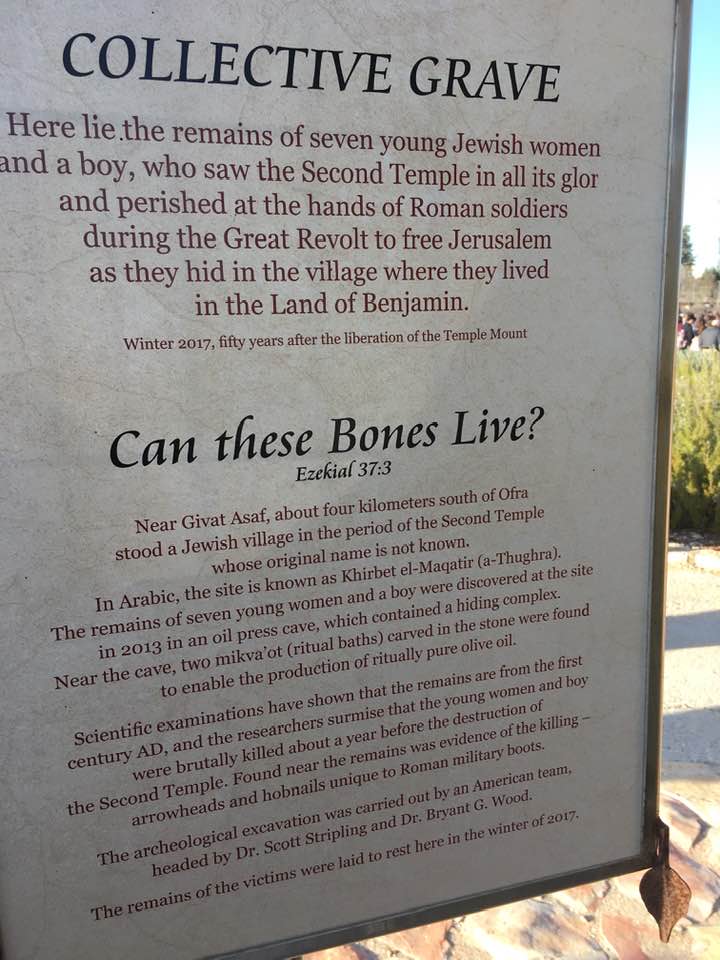 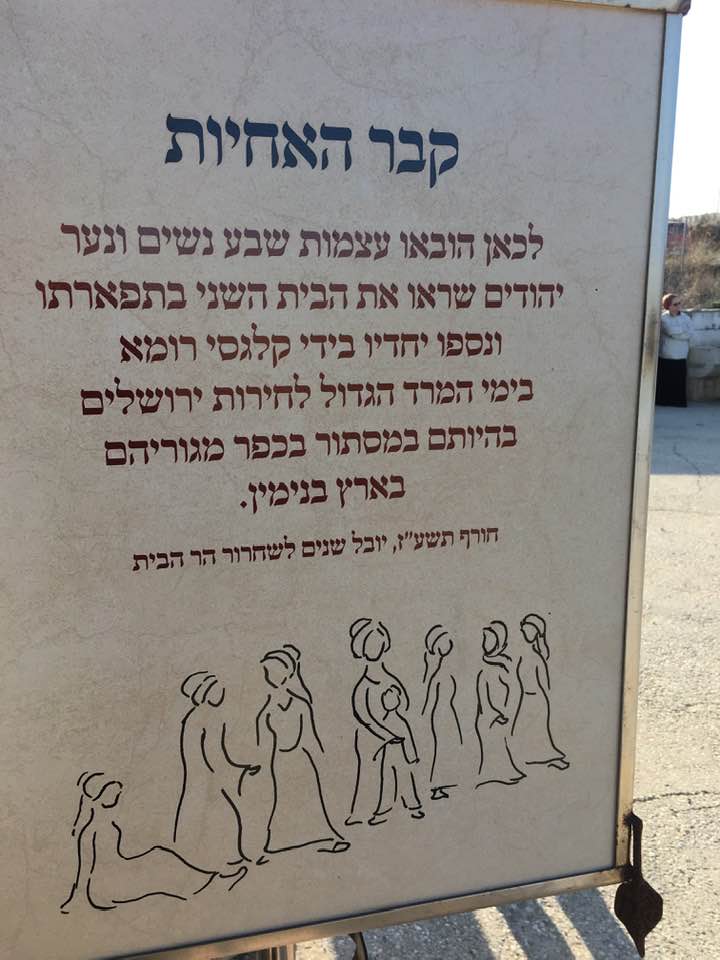 Sisters Grave, here lie seven women and one boy who saw the holy temple of Jerusalem in all its glory and fell victim to the Roman troops during the Great Revolt for the freedom of Jerusalem (66 - 73), murdered while in hiding in their village in the land of Binyamin (Benjamin).

Join Us in Israel