Training with Prof. Arthur Cohen, may he rest in peace.

I can say that I have personally met with people who have been in all the above situations. My advantage is that I have traveled to about 11 -12 countries every year for the past 15 years. I have seen more than most. I have worked with Ukrainian presidential guards, American SWAT team leaders, German commandoes, and South Africans from every walk of life. I have heard their stories, I have seen their videos. As such I can say that I have experienced more than most. This is the experience and leadership that I bring to IKI. There is not much I have not seen. And yet, I am constantly researching, learning, from the gangs of Los Angeles to the gangs of London, from the Mexican drug lords to the prisons of South Africa, I have the footage, some of it not available to the public. I have seen as much as any man. This is IKI.

The song writer said; I have not experienced every form of sadness or joy. I have not personally experienced all the rejection, heartbreak, love, hope, and disappointment that I write about, but I do not need to.

Can you write about all these emotions if you have not experienced every one of them yourself? The song writers and the novelists say yes, you can.

When an actor, a true actor, is preparing for a part, they research it. They meet the real characters, the real prostitutes, gang members, mafia soldiers and real combat soldiers. They meet the mentally insane, they meet the rich and the poor and they build their character accordingly.

No one can experience all these things in one lifetime but everyone can learn about them. My dear friends, teacher and mentor Prof. Arthur Cohen, may he rest in peace, told me...you can make yourself an expert on any topic, if you study and research it enough.

I would drive around New York with Arthur and he would point out train stations, bridges and say... over there, that is the hangout of the XYZ gang...that is where the famous murder took place.

Arthur became a regular contributor to Law Enforcement magazines and was frequently consulted and asked to be a guest speaker, even though he himself never served in the police.

As my teacher Prof. Funkenstein told me years ago, You do not need to be a triangle to teach geometry. You only need to study it and understand it.

Some say one cannot be a true self defense instructor unless one has experienced the violence he is training others to defend against. I have met every form of defender, from Bounty Hunters, to presidential guards, secret police, Border police in dozens of countries around the world. They have shared their experiences with me and I have listened.

No one person has experienced the full gamut of violence, to do so one would have to be a psychopath, such people are not self defense instructors and usually are found in prisons. Such people usually have a very short life expectancy.

But we can learn. We can learn from all of them and as Prof. Cohen said we can become experts. Israeli experts travel the world teaching advanced agricultural methods to farmers, and yet they "only know the Israeli soil", but everyone can learn and adapt. Remember my teacher, one need not be a triangle to teach geometry.

Train hard, test everything, challenge everything, walked humbly with your God, and you shall become wise.

Israeli Krav International (IKI) is under the direction of Moshe Katz.

During the course of his 30 years in martial arts Moshe has trained with some of the greatest instructors around the world. He is certified by Wingate, Israel's national Martial Arts certification board, and by Itay Gil; his instructor and friend of many years.

He spent several years working for the Israeli Board of Education as a Krav Maga instructor, adviser and contributor. He spent two years training the Jerusalem Elite security guards.

Over the years Moshe has been recognized world-wide for his Krav Maga abilities and innovations and has received numerous awards and honors from military, police, civilian and governments. He has been featured in news broadcasts, TV and radio, newspapers and magazines throughout the world.

In 2010 he was inducted into the International Martial Arts Hall of Fame as instructor of the year.

In 2014 he was inducted into the American Black Belt Hall of Fame as International Krav Maga instructor of the year.

For a more complete list of certifications please see. Ranks and Awards.

Join us for an experience of a life time

Immerse yourself in real Krav Maga for a week, two weeks, or three weeks. 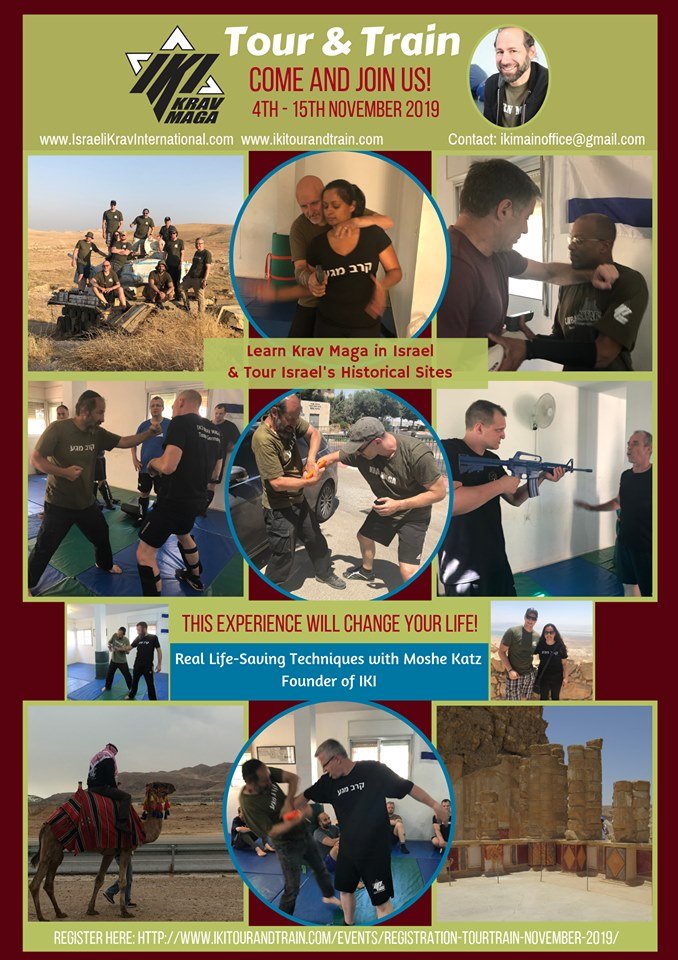