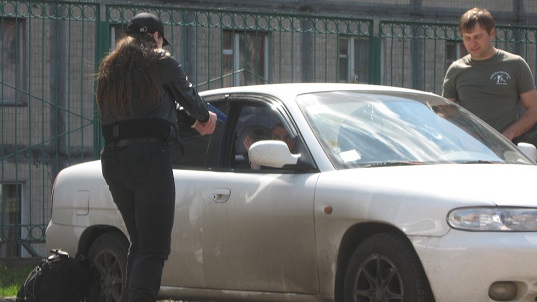 IKI Krav Maga is based on principles learned from combat and real life violent encounters. We learn that we must prepare for violence by training, by staying alert, by expecting violence, by having the correct mentality. But there is more.

Over more than three decades studying many martial arts I have come to realize that most styles do not even touch upon the key elements of survival. They do not even though upon these crucial topics.

How so? A full time martial artist would be a "sponsored athlete". He will be able to train full time. A professional martial arts instructor must devote most of his time to running a business; teaching, cleaning the school, billing, travel, marketing etc. The bottom line is very very few people have a great deal of time for training.

As such we must learn the habits of successful people which means focusing most of our time on the key points. In our case that means the points that we keep us alive.

Let us take a lesson from the Israeli army, the IDF, admittedly one of the most respected armies in the world. Israel does not have much of a full time army. We cannot afford it.

As individuals we are very busy and do not have a great deal of time to train. Similarly, as a nation, we are a small nation and do not have the manpower to support a large standing army. The key to our military is the reserve system.

Our reservists are not full-time soldiers. They are businessmen, family men, teachers and gardeners. They are hi tech workers, bus drivers and shop owners. But it time of war they return to their units and become warriors.

Let me clear. These are not 'backup' troops. These our own main troops. When our regular army, the young guys, were retreating in the early days of the 1973 Yom Kippur War it was the reservists, the older guys, who came in and turned things around. The reservists are the backbone of our military.

When we analyze real life violent encounters and when we analyze war/combat situations we find many elements in common. One of those is incorrect training.

Most people focus on techniques, the physical element. Some black belt tests require "feats of strength" and endurance. But when it comes to real life violence often this training fails and the person collapses in confusion.

For starts lets focus on a few simple points.

The first is that deep down they were really not expecting to be attacked. Despite verbal recognition of the threat of violence it was not internalized and really, it was not believed by the individual or unit. As such surprise is total and renders the person unable to respond correctly.

Next, most people cannot focus or function during chaos. The Israeli army adopted as a doctrine that leaders must not only be experts in their fields; air force, infantry, navy, etc but capable of coping with extreme stress, Chaos, the Fog of War, and lack of certainty.

And...to quote Shmuel Gordon, "For this nation, for this state, are expected still many difficult tests..."

And so it is for all of us as individuals.

Beyond our physical training, beyond our technique, we must train our minds to function in chaos, fog and the lack of certainly because that is reality.

The reality is we will never have complete certainty. We will never know what evil lurks in peoples' minds. But we must be ready. Mental preparation is our first and best defense.

Be prepared! Prepare your mind!