Black Belt Tests – Your Day Will Come
By Moshe Katz 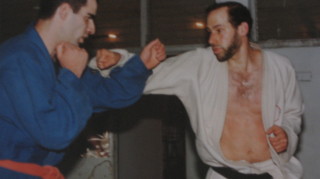 the author, Moshe Katz during belt test, years ago

I used to feel just like that myself. Back in the day in New York I recall my karate teacher, Saiko Shihan Shigeru Oyama , talking about learning the "basics" of the art. When he said the basics he was referring to reaching a first dan black belt. At the time I thought of black belt as the highest one could dream of. Now, with 4th and 5th degree black belts and still learning, I agree with the old master, first dan is just the beginning.

First dan, first degree black belt, shodan, is certainly a great achievement, no doubt about that. You will have to put in many hours on the mat, you will have to make many sacrifices, and you will have to learn to deal with a lot of hurt. In the end, however, you will know that it was all worth it.

But at times it can seem like a million light years away. That is why all the great masters say – don't think about the belt, don't think about rank, just focus on your training, focus on today's technique, and never ask for rank. In traditional Japanese schools the more you ask for rank the longer it will take you to earn it. Rank is awarded, it is not asked for.

With Itay, training is anything but traditional, it is hard core practical and he has little time for formalities or tradition, but, the belt is highly honored. I recall after my brown belt test, which was so hard it felt like I was hit by a truck, or several trucks, my body was shaking for three days. People had thought I was attacked by terrorists. Itay pulled me aside after the test and answered the unasked question. "You too will be awarding belts and I want you to understand that belts are not a gift. You and I are friends but belts are not about friendship, you have to earn your belt, you have to pay for it."

I recall as I participated in other's students black belt tests. As was expected I fought them hard to make the test meaningful for them. Again Itay read my thoughts, "When will my day come?" and again he answered the unasked question, "Moshe, your day of glory will come. It will come, just keep training hard."

I accepted my teacher's answer.

My day came, and how. The first dan black belt, the second etc, teaching police, traveling the world, how right he was; work hard and your day of glory will come. Now as I look back I am glad he did not give me any '"discounts" or favors; I would not have valued it nor would I have achieved what I did. I must still repeat those words, "Someday you will promote students, and you must remember that rank is not a gift among friends."

Sometimes, years later, I would bring a student to be tested, and Itay would say no, he is not yet ready. I would make a face and try to argue but Itay would always say, "Do you remember how hard you worked for your ranks? Do you think we should be giving ranks away?" and I knew he was right.

Recently I was testing a student for yellow belt, and he was getting his butt kicked, and hard. I was saying, "OK, we don't have to do the full 18 minutes of fighting, he suffered enough" and then my student Shmuel said, "Yes, we do, otherwise he will feel bad later and he will not respect his rank. We must go the full 18 minutes."

My student was right. And I realized the message was absorbed, the torch has been passed on. The tradition continues.