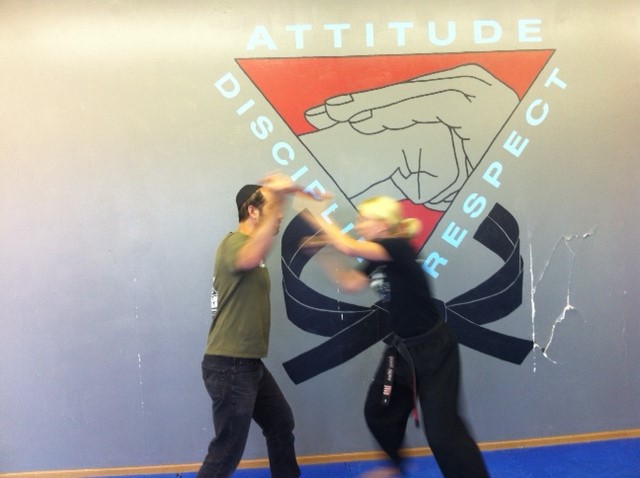 Amy was our first female black belt and female instructor in the United States, and continues to train with IKI Head Instructor Moshe Katz to upgrade and improve her skills. So proud of her for teaching women, children and...men. She is a true role model.

Here she is training with Moshe on defense vs. Knife attacks, Springfield, IL, 2013.

One of our goals it to train women to become effective Krav Maga instructors and role models for women who might be reluctant to train with a man.

I received the following question recently.

"Question; during my military service in the IDF I was stationed in Wingate Institute for a few weeks as part of my sergeants' infantry course. This was a few years ago. We were trained by young girls in Krav Maga, they were quite charming, really, but did not leave a real impression in terms of their fighting abilities, they were rather slow, and in general really lacking in power, they did not project 'empowerment'.

Can a girl really reach a high level of individual fighting prowess? …with regard to the impact of the blow, speed, and quickness of reaction?

Or perhaps…they can demonstrate the techniques very nicely but without actually being powerful fighters?

I am of the opinion that girls are suited only for demonstrating the Krav Maga combat techniques but totally not for really fighting." 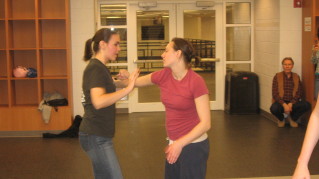 These days we have many female instructors around the world, they are skilled and capable of hurting anyone who would come their way. Clearly women can develop fighting spirit and Krav Maga skills. Yet clearly most women will be physically less powerful than men, but we must remember the nature and purpose of our Krav Maga training.

This is not about winning a tournament fight. Our training goal is self defense, not trophies. Can a woman, even a small women, knee a man in the groin? Will this hurt enough to create a window of opportunity for her to escape? Can a woman poke a man in the eye, smash him in the face with an elbow strike? Yes, indeed, and that is all we aim to do.

Our training is perfect for women. We believe our training for women is second to none! We offer not only empowerment but actual skill.

Perhaps these women he is referring to only had some limited training as part of their army service, I don't know. I do know that my female student/Instructors, such as Amy Jo Giles in Illinois or Esther in Israel, can pack a serious blow. I would not want to be hit by such women, especially if they were angry.

In fact I have been hit by them in training and I know how damaging the blows can be. 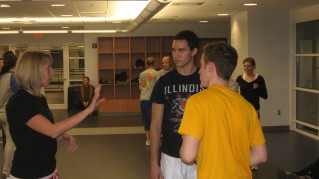 Women can succeed in Krav Maga, they can learn to defend themselves, and they should.

Moshe:  Just as a little backup to your blog post on “Can Women Do Krav”….. At GMKM we have several women in our classes from time to time.  Taking the most unlikely examples, we have two who are 5’-2” or less and around 110 pounds or less.  One has some background in martial arts and the other has none.  We train them in the same techniques and in the same way as we train our 6’-3”, 295# former football player who has various martial arts in his background.  Obviously we modify some techniques based on relative height, weight and other “obvious” differences in the opponents but the focus is simple (of course based on your IKI philosophy):  We get them to develop a (controlled) totally aggressive “attack the attacker” mentality when/if the time comes, drive into the attacker to inflict as much instant and unexpected pain and confusion as possible (lock up the computer, so to speak) and then escape.  This works on the ground, from punches, from grabs, from weapons attacks, etc., etc.  There is no question in my mind that these two can get away from virtually any bad situation, provided they add our basic ‘awareness’ attribute into the equation.  Looking forward to you meeting them in February.

We have some others who are new and are coming along the same way.  The two mentioned above are great role models for new students of any size.

And yes, while it’s controlled, in our dynamic drills they will indeed leave a mark (literally).

FYI in the beginning (and off and on in further training) we get the comments like “that wouldn’t work for me against someone that size”….And then we factor in the idea that in a real world conflict the ‘bad guy’ has no clue what you are going to do and usually doesn’t expect much resistance and certainly not intense aggression or he would be messing with someone else.  The element of  surprise, if you allow it to be your initial advantage compensates for a great deal.  Remembering that your primary objective is to get out of the situation safely is the key in my opinion, esp. for a smaller defender.

Just for your ‘for what it’s worth’ file.

It takes a mere 7 pounds of pressure to crush a windpipe. My 6 year old is capable of it, not because he is abnormally strong, but because he knows TECHNIQUE!

As a woman and a female IKI instructor, I can't express enough the importance of technique over brute strength! It's an education I'm blessed to share every week and I thank you, Moshe, for being my Mentor and leader in our mission to empower PEOPLE (no matter their gender, size, athletic ability, etc)!

Some of the best most capable students I have ever trained have been women. One accidentally gave me a light concussion once and I was in a "bulletman" suit!

Begin your journey today to become a certified Krav Maga instructor. Our in-depth Krav On Line program is a great way to start. All you need is someone to practice on, and a computer. We will guide you step by step. You will receive daily updates directly from Israel, the source of Krav Maga.

Women in the IDF

Moshe Katz has been training men, women and children for over 25 years.

He has been recognized for his teaching of women by Israel women's martial arts association, the Jerusalem municipality, "Take Back the Night" and women  - from all walks of life, all levels of skill, and all parts of the  world.

For more about Moshe Katz: