The number sets off alarms; and so does the fact that the victim often knows or has an intimate relationship with her attacker. Therefore, far too many rape/assault cases go unreported. It is important to state that absolutely no one (female or male for that matter) deserves, provokes or “asks” to be assaulted. Statements that suggest otherwise, such as ‘She shouldn’t have drank so much’ or ‘You see how she dresses, she was asking for it’ are at best infuriating and uneducated. At some point in our lives, we have ALL exercised poor judgment. Under no circumstances does the presence of poor judgment validate sexual assault of any nature.

What can be done about this problem? A debate currently exists. Many feminists believe that our society fuels a “rape culture” by labeling the issue a women’s issue rather than a men’s issue. Those same individuals believe that society, inadvertently, lays the blame on women by not holding men accountable for their actions. Their solution suggests we shift that blame by promoting sex crimes as a male issue - creating greater awareness among men through education and harsher repercussions. 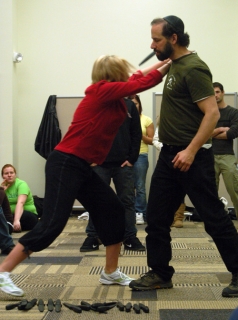 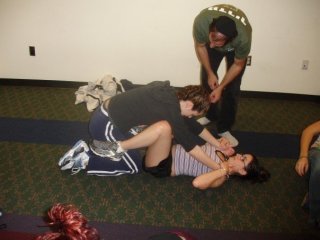 Students in Virginia learn to fight back against potential rapists.

Legitimate points are expressed within the feminist argument. Education is certainly a powerful tool that could do a lot of good toward lowering the statistics. That being said, self-defense courses are, in fact, educational tools that allow people to connect with their inner strength - a strength that goes far beyond muscle! Taking a self-defense course, a good self-defense course, teaches women easy to learn and easy to recall techniques ranging from basic verbal skills to possible physical responses. It would seem that the power of education could be utilized for both genders on an equally positive platform.

We recently saw a clip from the Krav Maga episode of Fight Quest and it would take an entire team of men to overcome the female instructor, Avivit Cohen. Not only is she physically strong, but she is mentally capable of protecting herself. A men’s issue or women’s issue becomes neither here nor there when a woman knows how to use her mind, body and environment to protect herself!

One might ask, what if I don’t have time to become another Avivit, Jennifer Lopez in “Enough” or Angelina Jolie in “Tomb Raiders”? While extensive training and practice in a martial art, such as Krav Maga, is extremely valuable, educational and empowering, a basic self-defense course can offer people the tools and concepts they need to de-escalate an attack. Of course, the more you train and the more you have in your arsenal the more likely you are to “flip the switch” and/or to use your training.

To “flip the switch” is one of the most difficult concepts to teach. Some women fear that they will provoke their attacker further and increase the severity of their injuries if they attempt a physical response/defense. This is a dangerous misconception. The reality is that between 70-80% of women who reportedly fought back did manage to avoid injury and/or rape. Studies have also shown that ‘strategies’ such as crying, pleading and reasoning were ineffective.

Ideally, a good self-defense program will teach you some simple techniques such as a slap to the groin, a palm to the face, a poke to the eye and a stomp to the foot as well as certain verbal communicators as yelling ‘Back Off’, making eye contact and more. Safety expert Arthur Cohen states that one of our natural fears is loud noise…a good program will incorporate such verbal effects.

How do I choose a good program? The National Coalition Against Sexual Assault disseminates a great article discussing the Guidelines for choosing a Self-Defense course which can be viewed on our websites www.kenpotime.com and ww.yourkravmagaexpert.com. The article brings up an important message regarding the role of mace and other aggressive devices used as “self-defense tools”…such devices are useless unless you truly know how to use the tool and happen to have the tool in your hand at the time of the attack. That doesn’t mean that training with weapons such as the Kobutan (a self-defense key chain) or visual image practicing (for example using your purse or keys) aren’t useful tools; it just means that we should always be aware that the speed of which an incident occurs may not allow us time to effectively utilize the weapons or our imagination. “Self-defense tools” should always remain a secondary training source to mental and physical techniques.

Taking a self-defense class is one of the most positive things a woman can do for herself! A person might have only one possibility to defend herself, don’t lose it…become educated. Always remain aware of your environment, walk and talk with confidence and TRUST YOUR INSTINCTS!

For more information please feel free to contact the authors: 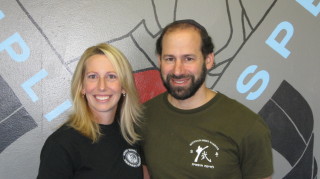