When I first started training in martial arts you might say I was a bit naive, and trusting. I learned all the stances, (the cat stance, the horse stance, we seem to have forgotten the human stance), and the kata's. We did all the one step and three step moves and I pretty much thought I was street combat ready. I felt like a super hero, just needed my cape. How off I was. I had not yet begun to question. 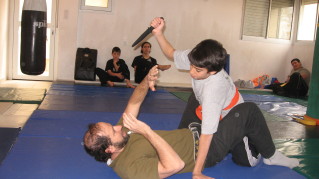 As the years went on and my experience grew I realized how utterly unprepared I was for anything but an attack by a member of my own style of karate, of course with my advance agreement and consent and only after changing into appropriate clothing and doing my stretches. All fights began with a bow and strict rules were followed by all. Even so, when I watched the black belts fight they seemed to rely on a few basic moves and neglected most of the fancy techniques we learned. This got me thinking, but not too much, not yet. I still believed that a back spinning round house kick to the head was a practical way to end a street confrontation. By the way I am not saying this will not work, only that there are much easier, safer and more efficient ways to deal with your local terrorist or thug.

I loved those early karate days and cherish the memories; I am only saying it was not a "street survival" course.

Fast forward many years and I realize how most styles of martial arts neglect nearly all aspects of real self defense. They do not deal with the places, the mind set, and the type of attack you are most likely to face. The truth is, reality is pretty scary and most of us are not ready.

After much testing of techniques in as close to reality type training as possible, I am convinced that most humans are incapable of successfully executing most martial arts techniques in high pressure stressful situations. The movies have totally led us astray into fantasy land and too many dojos seem to be living in a movie.

Reality is a hard mentor.

Among the many neglected areas of training, areas which we cover in Krav Maga training are; psychology of self defense, fighting in confined spaces, multiple attackers, airlines, buses, hostage situations, huge size differences, and ground fighting.

In the ground fighting area one of the aspects neglected is ground fighting with a knife. When the assailant pulls out a knife he also erases any perceived advantage you might have thought you have. Man, talk about a reality check, being on your back, mounted by a lunatic with an edged weapon. On top of that he might be ugly and have bad breath! Did your sensei teach you how to deal with this?

I have found that most of the (very few) schools that address this question still fail to do so in an aggressive way, resulting in techniques that will fail the test of reality. When I train with Itay Gil on these techniques the idea is always to try to make the other guy fail and get stabbed. That is only way we can test it.

Ground fighting with a knife is scary, dangerous, and always too close for comfort. The knife is coming at you while you are lying on your back or stuck in his grip. It is, however, an area that anyone seriously concerned with personal survival must address.

About the author Moshe Katz