Krav Maga is based on practicality; its lessons come from actual street experience. Tradition plays no role whatsoever. One of the areas in which Krav Maga is leading the martial arts/reality self-defense community is in gun defense. Simply put, we are gaining a great deal of experience in this area.

Gun Threats - When an assailant has a gun pointed at you.

Gun Evasion - When someone is already firing at, or near you.

Active Shooters - When a shooting has begun in a crowded place.

Gun Retention - If you are carrying a gun and someone is trying to take it away from you.

The Gun as a Blunt Weapon

How, why, and when would you use your firearm as a blunt weapon? After all, it was not designed for that purpose.

"Eli was in his office where he worked as an insurance agent. He heard shots being fired. He looked out his window at King George Street in downtown Jerusalem and saw three armed terrorists opening fire on pedestrians. He grabbed his personal firearm and flew down the the flight of stairs. As he ran into the street he spotted two of the terrorists and opened fire on them. He killed one on the spot and began to pursue the second. When he was within a safe range he opened fire but his gun jammed. He ran up to the terrorist and using his firearm, struck the terrorist in the neck, dropping him to the ground."

The above is a true story. (I know the individual personally). It is very important to keep your gun clean and in proper working order, but sometimes, it might jam. In such a case you need a backup plan. If you are close enough you can use your firearm as a very effective blunt weapon.

When To Use the Gun as a Blunt Weapon

If you are in the process of a gun disarm technique and the aggressor is resisting, i.e. he is still a real threat, as you remove his gun use it to strike him. This is not a separate move but rather flows directly from the disarming technique.

If you are a police officer, soldier or a legally armed citizen and you have apprehended a suspect and have drawn your weapon, if he tries to disarm you, a struggle may ensure, as part of this struggle it might be advisable, depending on the circumstances, to use the gun as a blunt weapon.

Once you take the gun away, striking the areas on the neck, ribs and back, can cause him to comply and enable you to control him.

When Not to Use Your Gun as a Blunt Weapon

If your gun is in your holders, keep it there, unless you intend to fire on someone.

Never Pull Out Your Gun with the Intention of using is as a Blunt Weapon.

The following advice comes from my friend Louie Balestrieri, retired NYPD officer and detective, who has seen much real-life street action and has been decorated many times for courage and valor in the line of duty.

As a Last Resort

As for using your firearm for blunt trauma is concerned, I am personally not a fan of it except as a last resort tactic. (As Eli C. used it in Jerusalem to subdue the terrorist). Those last resorts would be if I am completely out of ammo or my weapon becomes completely incapable of firing, then  by all means use it to smash your opponent. I have used my weapon (at the time a .38 caliber revolver) to hit people, and yes, it did open up the perps head. More often than not it didn't stop them.

The Gun can become a Hindrance

One particular incident that I recall was when I chased a drug dealer into a building in Manhattan that was being renovated. As I ran into the building, the perp hid behind a door and swung a 2 X 4 piece of wood at me. I was able to block the 2 X4 because it was so long and struggled to remove it. I smashed him in the face with my gun, and he released the wood as he put his hands up to block his face. His head was busted wide open but he didn't stop fighting. Now I can't shoot him because he is unarmed and trying to continue to run and escape. I only have one hand to grab, block, and fight, because I have to protect my gun from being taken away. So in this instance, the gun became a hindrance.

You also have to consider who is around you when you are using the gun. If you are in close quarters on a populated street, you might accidentally discharge a round and kill or injure an innocent bystander or partner. Remember your flinch response...when you swing that gun and your finger is on the trigger, you are going to tighten your hand on impact so the gun doesn't fly out of your hand. This may create the discharge.

Also I would never strike someone using a semi automatic because you may knock the gun out of battery and "stovepipe" or jam a round in the chamber or bend the slide incapacitating your gun. If you are close enough to hit someone with your gun you should be just as easily capable of hitting him with an elbow or knee.

Drawing Weapon Creates Possibility of Having it Taken Away

You Only Have Two Hands

If you are holding your gun in one hand you will not be able to use both hands to fight with. You will have a very hard time attempting to block, strike, and use a joint lock with only one hand to use.

Take Your Finger off the Trigger

You must remember to remove your finger off the trigger. Your grip will automatically tighten when you strike.

DO NOT USE THE BUTT OF THE GUN OR STRIKE IN ANY FASHION THAT WILL ALLOW THE BARREL TO BE FACING YOU.

What I suggest is to strike with the bottom tip of the barrel which is very strong. You can accomplish this by holding the gun and striking down  as if you were doing a hammer fist, but having the firearm being an extension of the hammer fist. This will allow a good grip on the weapon and deliver a good blunt trauma. Just remember to keep the barrel always pointed at the bad guy just in case it discharges.

As pertaining to guns, knives, and blunt trauma weapons I feel you must train as realistically as possible and train often. You must remember that no technique can or will work all the time with 100% results. 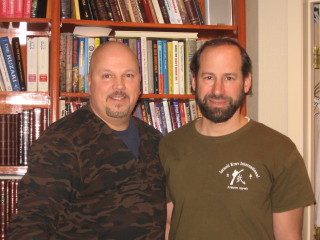 The M-16 Rifle as a Blunt Weapon

In the Israel Defense Forces (IDF) all recruits learn to use the M - 16 rifle as a blunt weapon as part of their Krav Maga military training. There are two basic reasons for this.

1. Many times a terrorist  will try and grab a rifle from a soldier and take it away. This will then be used in a terrorist attack. As such a struggle will take place and there is the opportunity to use the weapons as blunt weapon.

2. When faced with an assailant up close and personal it is more effective to use the rifle as a blunt weapon.

The basic Krav Maga techniques involve using the rifle as a spear, with the barrel poking the assailant, and using it as a club, swinging it into the assailants face or body.