Our Israeli Krav International Krav Maga diplomas are written in both Hebrew and English, side by side. The Hebrew text was composed by Itay Gil, internationally known Krav Maga fighter and former trainer of Israel's counter terror unit. He is also the author of "Citizens Guide to Stopping Suicide Attackers". The English text was written by Moshe Katz.

Our diploma features photographs of ancient coins . These are coins from the Bar Kochba revolt. When the Jewish people managed to temporarily defeat the Romans and reestablish an independent government, they minted coins. The writing on the coins is ancient Hebrew and reads "For the redemption of Israel, the freedom of Jerusalem." 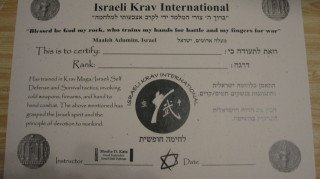 On the top of our diploma we have some fighting words from King David; Psalms 144, "Blessed be God my rock who teaches my hands to do battle, my fingers for war."

The spirit of King David still lives on.